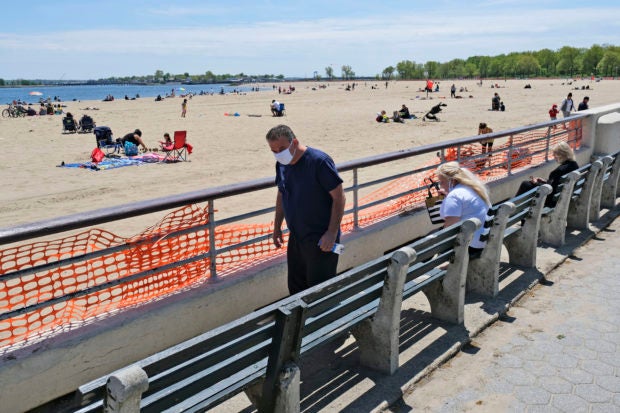 People get some fresh air at Orchard Beach in the Bronx borough of New York, Sunday, May 17, 2020. Parks, boardwalks, and beaches attracted some crowds this weekend, though city beaches aren’t officially open and won’t be for the upcoming Memorial Day weekend. (AP Photo/Seth Wenig)

The governor signed an order late Friday allowing people to assemble in groups of as many as 10 as long as they stay at least 6 feet from other people and wear masks when they can’t maintain that distance.

The surprise order came hours after the New York Civil Liberties Union (NYCLU) filed a lawsuit challenging earlier rules allowing gatherings only for religious services and Memorial Day commemorations. The NYCLU argued the Constitution requires the same right be extended to people gathering for other reasons.

Cuomo’s move could clear the way for New Yorkers to picnic together in parks and backyards — if they don’t get too close to their friends. They can also head to New York City beaches this weekend, but they shouldn’t expect to get in the water, and they’d better be wearing a mask.

The forecast appeared less than ideal for the holiday weekend, however, with rain expected Saturday and clouds on Sunday.

While beaches elsewhere in the region will be open for swimming, Mayor Bill de Blasio has said swimming is not allowed at the city’s beaches and may not be all summer.

“I’ve been really clear about the beaches; they are closed for swimming,” de Blasio said Friday at his daily coronavirus briefing. “There will not be lifeguards. People are not supposed to go to the beach to swim.”

The danger of swimming without lifeguards on duty was made clear Friday when a 24-year-old man drowned off Rockaway Beach in Queens.

The main reason the mayor has cited for the swimming ban was to curb the spread of the virus by keeping people off public transportation.

While beaches on Long Island or in New Jersey are usually reached by driving, city residents typically take the subway to summertime destinations like Coney Island or Rockaway Beach.

Under guidelines intended to keep crowds from flocking to the beaches, people who live nearby can go there to walk or to sit, de Blasio said. Hundreds of police officers and civilian city workers will be on hand to disperse gatherings that violate social distancing rules and to hand out masks to people who aren’t wearing them, he said.

“I’m very hopeful that this weekend at our beaches, you’re going to see people following the rules because they know it’s the right thing to do,” de Blasio said. “But if they need some reminders, of course, there’ll be people out there educating, giving out face coverings.”

While most of New York state has begun to ease restrictions, de Blasio and Cuomo, both Democrats, have said that New York City, the epicenter of the virus outbreak in the United States, is still weeks away from starting to reopen.

Liverpool made a request to lease Dembele. The Frenchman intends to stay in Barcelona (Di Marzio)
Lyon midfielder AUAR wants to move to Juventus. Liverpool, PSG and Manchester City are Interested in him
Bayer has extended the contract with defender Wendell until 2022
Wasserman became the new agent for Fede Valverde
Kurzawa took part in a protest against racism in Paris. 20 thousand people took to the streets
Pedro will leave Chelsea in the summer. Roma-the favorite in the fight for the player (Calciomercato.it)
Liverpool, Chelsea and Manchester United have 12 days to buy Werner for 55 million euros. Then the discounts will end
Source https://newsinfo.inquirer.net/1279951/cuomo-lifts-ban-on-groups-new-york-city-beaches-open

Sereno: It is the most unfortunate time to pass anti-terror bill

Store that called police on George Floyd says they won’t do it again, decries police violence

Learning in time of COVID-19: Fiber optics, 5Mbps, P50 a month internet for every Gapan house

Biliran, Samar towns get first COVID-19 cases from patients who’ve been to NCR

Pregnant wild elephant dies after eating pineapple with firecrackers inside

Get Huge Discounts on PS4 Bundles, Games + More This Month

Shooting of ‘Avatar’ sequels to resume in two weeks

Venezuela's Maduro and Guaido agree to cooperate in virus fight

Some commuters think LRT-1’s visual cues are not effective. Here’s why.

PewDiePie denounces ‘sickening’ death of George Floyd, sets up charity livestream for cause

Kings broadcaster resigns after ‘All Lives Matter’ tweet to Cousins

Nigerians mass online to demand ‘#justice’ for abuses against women

Terence Crawford thinks Manny Pacquiao fight ‘can get made’

Seoul to go carbon neutral by 2050

FALSE: Photo of world's biggest anaconda in the Philippines

Don’t be a ‘cow on ice’: Sliding key to French Open success

Mark Your Calendars: Two Eclipses Are Happening in June