How Drew Arellano juggles time for his three kids

TV host Drew Arellano seems to be one very busy guy, which make his fans wonder how he manages to find time to attend to all of his three kids with fellow host Iya Villania, namely Primo, Leon and baby Alana.

“People think I’m busy but I’m actually not busy. People don’t know this about me. Even before the pandemic, I was already a home buddy,” Arellano said.

He corrected the misconception that he’s working almost 24/7. Arellano said that in terms of his TV work, it just takes three days in a week, and two days for actual travels for his travel show “Biyahe ni Drew.”

“People think na parang I’m traveling all over the Philippines and the world, but TV does that to you na parang (it’s like) ‘oh, wow.’ But the thing is, that’s just two days in a week… before,” he said. “[For] the other work, I just do a couple of hours and I’m pretty much home all the time.” 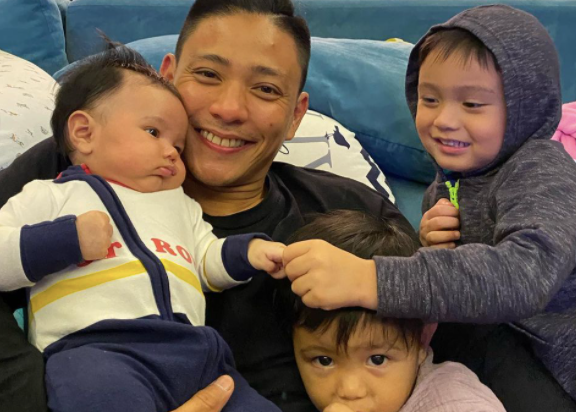 When home, Arellano’s first activity in a day is to exercise and train, and he’s done by 9 a.m. He does Zoom interviews for about an hour or three, one day in a week. Then he shoots a cooking segment for one hour. He then has the rest of this time to spend with his kids.

Arellano added that while there can be a few stressful times with the children, spending time with them is still “awesome” overall.

“You have like mga siguro (around maybe) a total of 22 minutes, you want to whack them and for 23 hours and so minutes, you really adore them and love them,” he said. “When they are together, they are so awesome.” JB

‘Better to be good than right’: Drew Arellano recalls a lesson on kindness with son Primo

LOOK: Iya Villania gets COVID-19 vaccine, urges public to ‘not be choosy’ on brand

No booze, no autographs: Tokyo Olympics sets fan rules with a month to go

How thoughtful lighting can help stave off cabin fever

Protecting the ‘good guys’: What to eat to avoid COVID-19

‘Wanting to be healthy is a mindset’

Jodi Sta. Maria inspires dreamers as she graduates from college amid acting duties

Should we risk the lives of 300,000 adolescents to save one?

Crocodiles are not hated creatures, symbols for corruption centuries ago. Here’s why.

What people pledge to do better in post-COVID travel scenario

Over 19,000 doses of Sinovac arrive in Bicol

Unleash power and productivity with Lenovo ThinkPad and ThinkVision

Hontiveros to vie for Senate reelection; backs ‘broader unity’ for opposition in 2022

Britney Spears gets her day in court, but what will she say?

PhilSys registration sites: Rundown of malls where one can register for national ID

Far from home? Spiderman drops in at the papal audience

Review of PH response sought vs China deception in WPS

Coastal cities face their mortality on the climate ‘frontline’

After COVID-19, could the next big killer be heatwaves?

SNEAK PEEK: Inside the First COS Store in Manila

GOOD FOOD, GOOD LIFE: All about chocolate, coffee, cheese, tea, and bacon (and maybe some whisky too!)