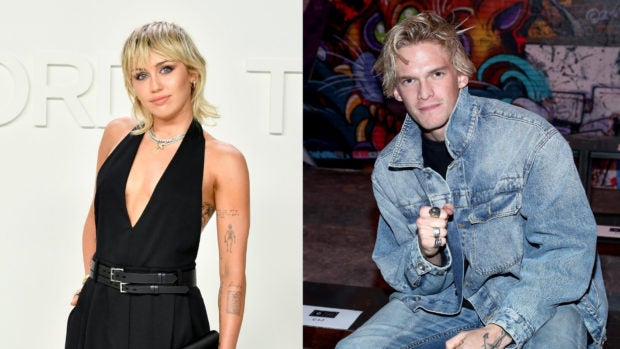 After less than a year together, Miley Cyrus and Cody Simpson have reportedly called it quits.

Cyrus and the Australian singer-songwriter have been separated for the past few weeks, according to TMZ yesterday, Aug. 13.

The pop star began dating Simpson in October 2019, a few months after breaking up with Kaitlynn Carter. Cyrus and Simpson were “best friends” even before their romance started.

When Cyrus underwent vocal cord surgery last November, Simpson took care of her. They also have matching tattoos, according to the report.

The “Wrecking Ball” singer was previously married to “Hunger Games” star Liam Hemsworth. The two tied the knot in December 2018 after a decade of on-and-off relationship. Their divorce was finalized last January.

Cyrus has defended herself from criticisms and “slut-shaming” due to her active dating life.

The singer pointed out that some feel “entitled” over her personal life because they watched her grow. But now she said she is “grown…and make choices as [an] adult knowing the truth/details/reality.”

Cyrus has been keeping herself busy with her career as she released the self-directed music video for her newest single “Midnight Sky” today, Aug. 14. Cha Lino /ra

Selena Gomez to release collab with Blackpink this August

Suarez on Atletico: I thought I was ready to move to a club that competes with Barca and Real Madrid. There were many offers
Pjanic on the best partner: Ronaldo before moving to Barca
Allegri can lead the Roma
Miracles in the PFL: Tuapse did not have enough players for the match, they put up two fake players - and did not lose to one of the leaders
Kevin-Prince signed a 1-year contract with Monza (La Gazzetta dello Sport)
I'm busting my ass at PSG for this chance
Pjanic on his move to Barca: Ronaldo was disappointed but said he was very happy for me
Source https://entertainment.inquirer.net/387229/miley-cyrus-cody-simpson-have-broken-up-report

Portrait by Renaissance master expected to soar past $80M

China to let in more foreigners as virus recedes

PBA gets provisional OK to resume season in Clark bubble

Palace to bishop: Stick to your role in society, don’t discourage people from wearing face masks

Senators back increase in judiciary’s proposed P43.54-B budget for 2021

PBA officially on as IATF gives go signal for bubble

No exodus of POGOs: Palace says only over 20 left PH

Municipal hall in Bohol town closed for disinfection vs COVID-19

‘No need for masks’ if you love God and have faith, ex-Lipa bishop says amid COVID-19

Mikey Arroyo raises idea of postponing 2022 polls due to pandemic

How ‘Jerusalema’ became the most Shazamed song worldwide

PH Army shields officer tagged in accounts shut by Facebook: ‘We trust him’

‘Not enough’: US athletes decry charges in Breonna Taylor shooting

Bea Alonzo Shares Photo of a Baby: ‘You brought sunshine into our lives’

What Is The Scientific Name Of African Sacred Ibis? (ANSWER)

Palace: China’s military occupation in SCS not a valid title of ownership

What Is The Largest Desert In The World? (ANSWER)