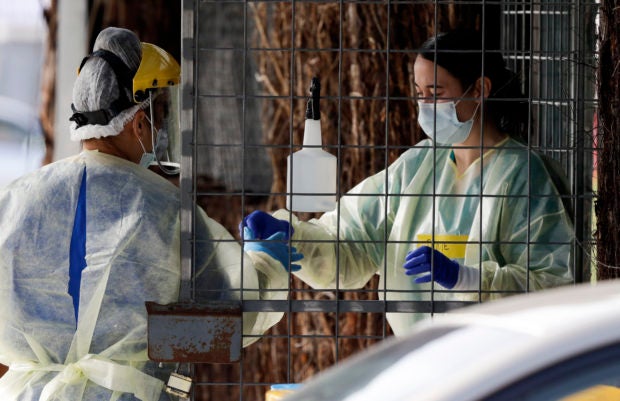 Medical staff prepare to take a COVID-19 tests at a drive through community based assessment centre in Christchurch, New Zealand, Thursday, Aug. 13, 2020. Health authorities in New Zealand are scrambling to trace the source of a new outbreak of the coronavirus as the nation’s largest city, Auckland, goes back into lockdown. (AP Photo/Mark Baker)

The outbreak has grown to 30 people and extended beyond Auckland, the country’s largest city, for the first time.

Prime Minister Jacinda Ardern is scheduled to announce later whether a three-day lockdown in Auckland would be extended past Friday, which seemed likely given the increase in cases.

Until the cluster was discovered Tuesday, New Zealand had gone 102 days without community-spread infections, with the only known cases all travelers quarantined after arriving from abroad.

Health officials don’t believe the virus was lurking undetected in the community for months but believe it started with a returning traveler or a border worker. But stumped officials have yet to discover the origins.

All but one of the 30 cases in the outbreak are linked, most through family or work connections. The only known infections outside Auckland were two people in the central North Island town of Tokoroa who were linked to the Auckland cluster by a family visit. Officials said they thought the chances were low the virus would spread further in Tokoroa.

Director-General of Health Ashley Bloomfield said they had only started investigating the 30th case, which was the most recent found and also the first person in the outbreak to be hospitalized.

Several of those infected work at an Americold food storage facility in the Auckland suburb of Mt. Wellington. Officials are looking at the possibility that workers on a freight ship or at the port may have spread the infections, despite physical distancing requirements at those sites and orders preventing ship workers coming ashore.

Bloomfield said they were doing rigorous testing at Auckland’s port “as part of our investigation just to follow that chain of the Americold goods that might have come in through the port and been transported to that Mt. Wellington depot.”

Officials are also investigating the possibility the virus could have survived from abroad on chilled or frozen food boxes and then infected workers in New Zealand, a scenario they consider unlikely.

Bloomfield said that they completed a record of more than 15,000 tests Thursday and they were getting a clearer picture of the outbreak’s contours.
“All of the cases so far, at this point, are connected. They are all part of one Auckland-based cluster,” said Health Minister Chris Hipkins. “And that is good news.”

Conte on 4:3 with Fiorentina: impressed with Inter's attack. We didn't have enough balance, we paid for it
Zidane about 3:2 with Betis: real can get better and will. A difficult game, but we believed in winning until the end
Dest said goodbye to the Ajax players and will fly to Barcelona today (Gerard Romero)
Vidal made his debut for Inter in the match against Fiorentina
Barcelona will only consider Zinchenko if Firpo leaves
The referee after VAR for a foul on Jovic removed defender Betis Emerson
Lampard replaced Kepu, but got 0-3 from West Brom in the first half. Then Chelsea got together and gave a comeback of the weekend: only the pupils scored
Source https://newsinfo.inquirer.net/1321657/new-zealand-probing-for-outbreak-source-may-extend-lockdown

Thousands of Israelis protest in Jerusalem, despite lockdown

5 Online Stores Where You Can Shop Vintage Furniture

10 Filipino-Made Comic E-Books You Can Get Online

China, PH should focus on ‘bigger part’ of relations

Selling beauty in times of COVID-19

The many faces (and voices) of Paris Hilton

Cynthia Nixon on suppressing one’s sexuality: People who want to kill parts of themselves are never going to succeed

Pacquiao to fight McGregor in 2021

PhilHealth to get P71-B in proposed 2021 budget, says Sotto

What comes next is ‘bonus’ for US Open champion Thiem

Pacquiao ‘will have easier time’ vs McGregor than Hatton