MANILA, Philippines—Some key positions in the Armed Forces of the Philippines (AFP) have been renamed “to keep in step” with the practice of armed forces of other countries, Defense Secretary Delfin Lorenzana said.

The defense chief said he recently signed an order for the new titles to be used.

“That has long been the plan before,” Lorenzana told INQUIRER.net over the weekend.

For example, he said, the title “chief of staff,” referring to the highest ranking officer of the AFP, “harks back to the time after the war when the AFP was a small organization.”

The chief of staff, said Lorenzana, “actually presides over the other chief and area commanders on behalf of the commander-in-chief, the President.” 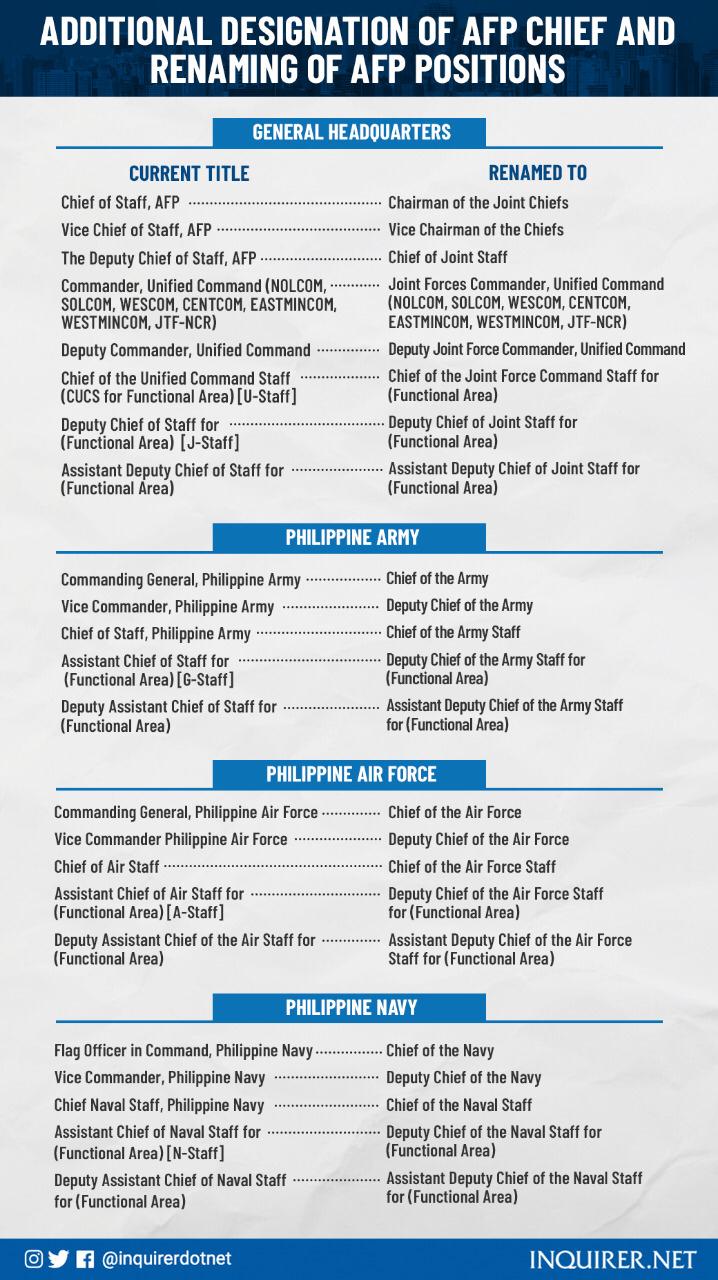 The AFP chief of staff, who will also have a new designation, will also be called Chairman of the Joint Chiefs, similar to titles being used in the US armed forces.

As joint chiefs chair, the head of the AFP will supervise and control the Joint Force Commanders of the Unified Commands who are the “force employers,” said Maj. Gen. Edgard Arevalo in a separate statement on Monday (July 13).

The renaming and designation of the key positions is for “effective command, control, and supervision,” he said.

“This will entail no added personnel, remuneration, or powers bestowed,” Arevalo said.

Under the orders dated June 19, which was seen by INQUIRER.net, the AFP Joint Chiefs would be composed of the following:

a. Chief of staff/ Chairman of Joint Chiefs

b. Vice Chairman of the Joint Chiefs (AFP vice chief)

c. Chief of the Joint Staff (Deputy chief of staff)

f. Chief of the Navy (Flag Officer in Command)

The AFP Joint Chiefs shall advice the President/ Commander-in-chief and the Secretary of National Defense on military concerns, as well as matters on future medium to long-term strategic direction and capability plans relating to the organization, training, equipment, maintenance and development of the AFP and its personnel, part of the order read.

The additional designation of the AFP chief and the renaming of key AFP positions were in line with the Department of National Defense’s thrust “to instill a culture of jointness” in the AFP.

It was also meant to strictly implement the “force provider, force employer” concept between the major services and unified commands.

The changes are also seen to pave the way for the implementation of the AFP Future Force Structure, which will make the military more responsive to current and future non-conventional threats, it added.

Liverpool are close to buying a defender for Olympiakos Tsimikas. Medical check-up-this week
Barcelona intends to sign Bernardo Silva. City can get Semeda
Real are planning to buy Dybala and are ready to include Kroos or ISCO in the deal (Sport Mediaset)
Conte about Inter before the 1/4 Europa League: we Continue to progress, we become stronger
Piontek is Interesting to Fiorentina. Herta wants just over 20 million euros
Barzagli or Grosso will replace Pirlo in Juventus U23
Daudov about Akhmat: I am Sure that the team will Interact better with each new game
Source https://newsinfo.inquirer.net/1306237/ph-military-adopting-new-titles-chief-of-staff-now-joint-chiefs-chair

US donates 100 ventilators worth about P78M to PH

PNP seizes P81.62M worth of marijuana in various operations

Sotto: Morales shortchanged the public for not divulging health status

What Is The Scientific Name Of European Nightjar? (ANSWER)

Ex-PhilHealth exec to testify in Senate probe on corruption mess

Starbucks Is Bringing Back This Buy-One-Get-One Deal

A great Sunday for Pinoy netter

Vera gets extra motivation with possible fight vs ‘Monster’

Global tourism faces challenges on its journey to full recovery

Ryza Cenon Excited To Meet Her Little One, Shares Sonogram

Simon Cowell has surgery for broken back after bike accident

Bill On Medical Scholarship Program To Be Passed By House

DOH: No need to ban rapid testing but it should not be used for screening

LOOK: This Modern-Looking College Library Can Be Found in Sorsogon

Flying leaflets into N. Korea was against basic rule of democracy—senior official

Recreate the world right at home with Globe