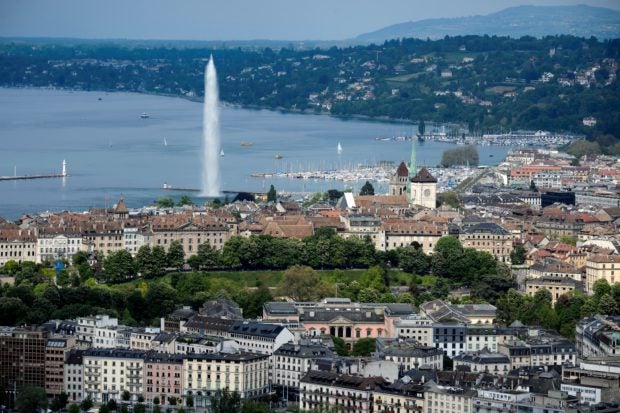 This file photo taken on May 14, 2016 shows an aerial view of the Geneva lanscape with the Jet d’Eau fountain on Lake Geneva where Russian leader Vladimir Putin and US President Joe Biden are to meet on June 16 amid the biggest crisis in ties between their two countries in recent history. AFP FILE PHOTO

GENEVA — The June 16 summit between Joe Biden and Vladimir Putin looks set to be held in a plush villa overlooking Lake Geneva, given the security lockdown zone announced Wednesday.

The Geneva regional authorities issued a decree fixing the secure zone around the talks between US President Biden and his Russian counterpart.

The secure zone screens off the waterfront on both sides of Lake Geneva, a section of the lake itself and two adjacent parks surrounding neighboring villas on the south side: the Parc de La Grange and the Parc Eaux-Vives.

Views from villas sweep down over the tree-lined parks to the shore, and across Lake Geneva towards the United Nations and the Jura mountains beyond.

Temporary security fencing has been erected around the parks.

“The council is pleased that the US and Russian delegations have chosen Geneva to host their heads of state meeting,” it said.

“This choice reaffirms the preponderance of Switzerland and of international Geneva on the global diplomatic scene.”

The authorities urged people to work from home and avoid travel as much as possible on the day itself.

“The council calls for the responsibility and understanding of everyone, so that this important event can take place under excellent conditions, in the Geneva tradition of respect, welcome and dialogue,” it said.

An unnamed US official confirmed to AFP that the summit was being held in a villa.

The 18th-century Villa La Grange is a former grand family home used to host the Swiss city’s civic receptions for more than a century.

The main entrance gates to the park are guarded by two stone lions, which were cleaned up with a pressure hose on Tuesday ahead of the summit, AFP witnessed.

Meanwhile the neighboring luxury Hotel-Restaurant Eaux-Vives, which dates back to 1750, has 16 suites and can hold events for up to 500 people.

During the summer months, the two parks would typically be filled by picnickers.

Lionel Messi: Everyone is at risk of contracting the coronavirus. It's exciting, we're concerned
Braithwaite on Eriksen: One of the scariest moments of my life. Happy to be alive
Unbearably boring England: no passes through the centre, a wild emphasis on standards, but a superb Calvin Phillips
Malinovsky about 2:3 with the Netherlands: The match can not be called great, we played too low. Could be a draw
Clement Langle: Griezmann is not always treated fairly. He had a good season, but the bar is too high
Karasev has been appointed for the Italy-Switzerland match
St. Petersburg police asked a fan to remove the flag of Ukraine in the fan zone

Synology NAS: A photo storage and multimedia server for your home

Teacher Nabbed After Being Caught Having Relationship with Minor Student

MMDA posts no infection among staff in last 2 weeks; 55% of workforce vaccinated

Heart Evangelista Boracay Resort: Here’s How Much A Night Costs

Before the fall: Netanyahu’s final days

DOT: 5,000 tourism workers in Bohol to be vaccinated vs COVID-19

Take your condoms home: social distancing and sex in the Olympic village

Most of near-expiry AstraZeneca vaccines have been used, says DOH

Dingdong Dantes Reveals Zia Does This During ‘Amazing Earth’ Voice-Over

French Open: ‘No regrets, no tears’ for beaten Tsitsipas

Coco Martin “Bulol” Scene Goes Viral Online, This Is What He Really Said

‘Welcome to the rainbow’: David Archuleta gets support from Pinoys after coming out as LGBTQ+ member

Camille Prats assures she’s at her ‘healthiest’ amid weight loss

DOH: 40% of newly delivered Pfizer vaccines to go to NCR Plus 8

Public urged to donate blood as supply drops amid pandemic

Woman Pretending as Personnel of Immigration to Extort Money Arrested

Metro Manila to have shortened curfew hours from 12 a.m. to 4 a.m. starting June 15