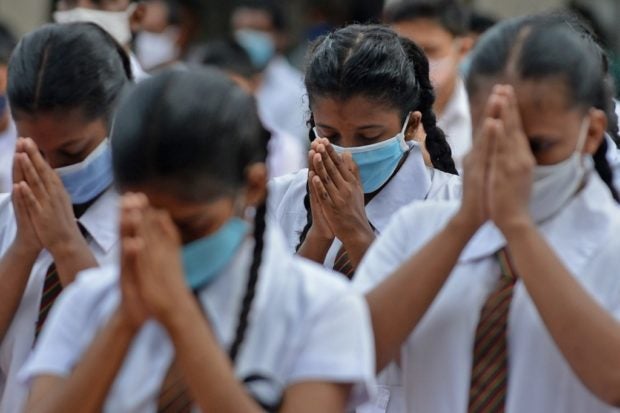 Students wearing facemasks gesture as they pray inside their school after it was reopened in Colombo on July 6, 2020. Sri Lankan government officially announced all schools to reopen from July 6 for students in Grade 5, 11 and 13 after being closed since March due to lockdown which was imposed as a preventive measure against the spread of the COVID-19 coronavirus. Photo by LAKRUWAN WANNIARACHCHI / AFP

COLOMBO — Sri Lanka ordered government schools across the nation to shut Monday, just a week after they re-opened, following a surge in new coronavirus cases.

The country has reported just 2,617 cases with 11 deaths, but army chief Shavendra Silva said nearly half the 1,100 residents and staff at a drug rehab facility near the capital had tested positive in the past week, and some visitors may also have been infected.

At least 16 cases had emerged in villages elsewhere across the nation, officials said, most in the central-northern region.

“Based on the direction of health authorities, it is decided to close schools this week,” the education ministry said in a statement, adding that private colleges were also encouraged to shut their doors.

“We will review the situation next week.”

Postal voting for next month’s parliamentary elections would be delayed in villages affected by the virus, the independent election commission said.

Sri Lanka’s ruling party on Sunday called off its rallies ahead of the upcoming poll and postponed the re-opening of the international airport, which was planned for early August.

A repatriation programme that has brought home some 12,000 Sri Lankans from overseas has also been suspended.

Coach Of Brentford: We went from a mid-level team to the third team of the season. This is an incredible achievement
Burnley are not going to sell Tarkowski for less than 50 million pounds
Lester wants to rent Trincou at Barca with the obligation of ransom for 50 million pounds
Scott Parker: Fulham have a lot to progress. And I am happy about it
Manchester United are threatening to pull out of negotiations for Sancho if Borussia do not reduce the price from 120 million euros
Cesc about Casillas: You are a mirror to look into
Lone mascots are another symbol of the year
Source https://newsinfo.inquirer.net/1306299/sri-lanka-shuts-schools-again-as-virus-cases-surge

PH recovery to be hockey stick-like

Legislators: License to explore Malampaya must be extended

All set for Boeing 737 MAX to fly again

She can’t reach her peak

Compromise – one step back for Metro Manila

SM Foundation highlights importance of handwashing facilities in its programs

Find a new beginning at The Residences at Commonwealth by Century

MrSpeedy: Automation is the new normal for logistics

Have pity on me, Lord

Controversy over 2 sets of health and safety protocols for film, TV and AV productions heats up (Conclusion)

Fussy starlet is richer than you think