WASHINGTON — The Republican National Committee and President Donald Trump’s campaign say they have now hired 1,500 field staffers, aiming to convert their financial advantage over Democrats into votes in November. 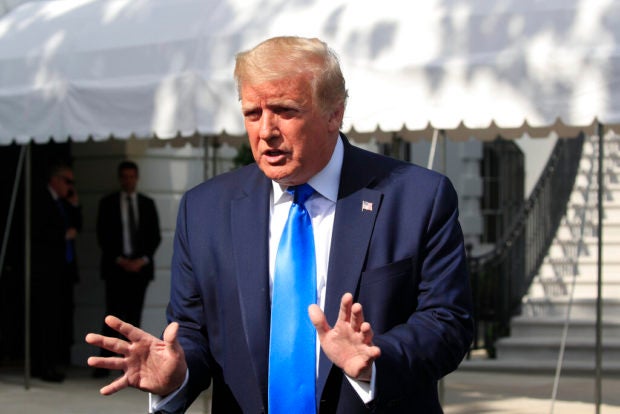 President Donald Trump speaks to members of the media on the South Lawn of the White House in Washington, Saturday, July 11, 2020, before boarding Marine One for a short trip to Walter Reed National Military Medical Center in Bethesda, Md. Trump Victory, the joint field effort of the two organizations, announced Monday, July 13, 2020, the hiring of an additional 300 staffers set to hit 20 target states by Wednesday in the largest field operation over mounted by a Republican. AP Photo/Pablo Martinez Monsivais/File

Trump Victory, the joint field effort of the two organizations, announced Monday the hiring of an additional 300 staffers set to hit 20 target states by Wednesday in the largest field operation over mounted by a Republican.

The goal is to turn out votes on behalf of Republicans up and down the ticket this fall. The Trump team says it is on pace to eclipse the 2.2 million volunteer total that helped reelect President Barack Obama in 2012.

The announcement comes as public and private polls show Trump trailing presumptive Democratic nominee Joe Biden across key battleground states and nationally. The president’s team argues that polls also showed Trump down in 2016 but he nonetheless pulled off a win.

RNC Chair Ronna McDaniel said the staff and volunteers are looking to use the RNC’s vast data trove and voter scores to reach a dwindling swath of swing voters and the far larger universe of low-propensity voters — many of whom already like Trump but are unlikely to vote.

A field program alone doesn’t win elections — and four years ago it was Trump’s ground game that lagged Hillary Clinton’s — but in a close election, the GOP argues, it can spell the difference between victory and defeat.

“In an election like this, where it’s going to come down to a few thousand votes in a couple of states, that’s when your ground game matters,” McDaniel said.

Republicans are quick to note that their staffer count in the field is more than double that of Biden, whose goal was 600 field staffers by the end of June. Additionally, the RNC staffers have been on the ground for years in some cases, while Biden has only just recently begun rolling out his roster of battleground state directors.

And while Biden’s campaign has out-raised Trump in recent months, Trump’s team believes its cash-on-hand advantage and hiring head start give it an insurmountable edge in reaching out to voters.

Both the Trump and Biden field operations went virtual largely overnight in mid-March as the coronavirus pandemic hit. Trump’s has begun resuming some in-person campaign activities as states have lifted some virus restrictions.

“We have the biggest and best ground game operation ever seen,” said Trump campaign communications director Tim Murtaugh. “We’ve built lasting relationships with voters on the ground that will power President Trump to victory in November. Joe Biden scarcely emerges from his basement, is woefully behind in state organizations and lacks any enthusiasm behind his candidacy.”

Biden’s campaign dismissed the criticism and asserted a broader advantage by the Democrat.

“In this moment of crisis, Joe Biden’s message is resonating with voters because he has displayed the responsibility and leadership that the American people expect of a president — whereas Donald Trump has careened from failure to failure, undermining the fight against the coronavirus pandemic with his instability and mismanagement while spreading hate to divide our country at a time when we need to come together more than ever,” Biden campaign spokesman Andrew Bates said.

The RNC has invested more than $350 million on data, technology and field programs since 2013. A key tool is “Trump Talk,” which harnesses both political and commercial data to provide staffers and volunteers with a dynamic script to use when contacting voters in person or over the phone.

Already the Trump effort has made more than 55 million voter contacts this presidential cycle — more than it made in all of 2016 — and amassed 1.4 million volunteers.

To be counted as a volunteer, “you’ve taken an action that we measure: a phone call, a door knock. Some kind of voter contact,” said RNC chief of staff Richard Walters. That’s important, said McDaniel, because “the best way to change the mind of a voter is for someone they value to have a conversation with them.”

Parejo and Coquelin has gone from Valencia to Villarreal
Coca: The win over Liverpool had a good impact on us. It is not easy to beat the European champion and the Premier League twice
Giovane Elber: Lewandowski is better than Messi now. Lionel is a genius, but this year Robert is unattainable
The head of the Belarusian Tribune was detained in Minsk. Max, we're with you
Karl-Heinz Rummenigge: FIFA is seriously thinking about awarding the Golden ball. I want Lewandowski to win
One Barca player among those starting the pre-season has contracted a coronavirus
Malinovsky settled in Italy: after the quarantine, he scored against Lazio and Juve, ahead of Mertens, Higuain and De Ligt in the ranking of the best players in Serie A
Source https://newsinfo.inquirer.net/1306265/trumps-reelection-operation-hires-1500-field-staffers

Cloudy skies seen in parts of eastern Luzon, Visayas due to ITCZ

Latest batch of more than 2,600 OFWs sent home to provinces—DOLE

QCPD confirms Echanis was stabbed to death in Novaliches, QC

Business picked up in June in GCQ areas — DoF

Triathletes’ advice amid lockdown: Remain active, do chores as exercise

No ‘ayuda’, no MECQ extension – Palace

UK in record recession after economy shrinks 20% in second quarter

Bee friendly: Five everyday things you can do to help protect bees

Ringo Starr and Slash to perform at virtual (DE)TOUR show

Xander Ford denies sex video: ‘I got scars from pimples, and tattooed eyebrows’

Heading to Work? You Might Need to Bring a Face Shield Starting This Week

DepEd test broadcast got off to a bad start – netizens

Palace: MECQ may be extended if Congress provides cash aid

Project Ark head on rapid tests as cause of COVID-19 surge: ‘I beg to disagree totally”

‘The Fresh Prince of Bel-Air’ is getting a dramatic reboot

Apple must pay $500 million over patent violations, US court rules

WATCH: Asian woman cursed, insulted by man after she turns down his lunch date invite

What Is Charisma? Definition And Usage Of This Term

This Is Not a Drill: Dapitan Arcade Now Has an Online Store