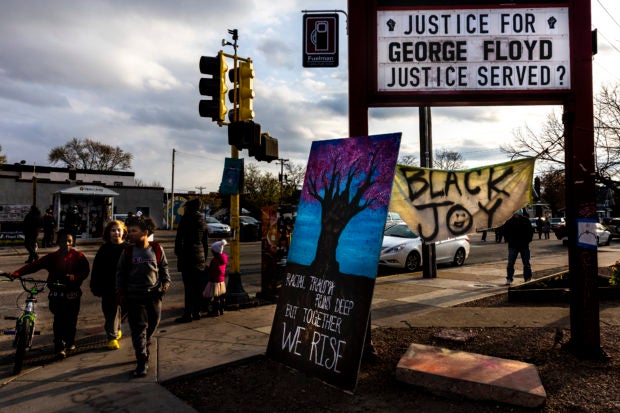 The 45-year-old — who knelt on Floyd’s neck for more than nine minutes in Minneapolis — faces up to 40 years in prison after being found guilty last month in a case that prompted a national reckoning on racial injustice and police brutality.

Chauvin’s attorney Eric Nelson argued that his client did not get a fair trial due to publicity around the case, court and prosecution errors, as well as “race-based pressure” on the jury.

He also alleges that jurors should have been isolated during the trial and that the case could only get a fair hearing in a different place.

“The publicity here was so pervasive and so prejudicial before and during this trial that it amounted to a structural defect in the proceedings,” Nelson wrote.

The filing came as the impartiality of a juror in the case has been called into question after a photo surfaced of him at an anti-racism rally.

Legal experts had said Chauvin’s defense attorney could potentially use the photo of juror Brandon Mitchell as grounds to appeal the verdict, though the matter was not mentioned in Tuesday’s pleading.

In the photo, Mitchell, a 31-year-old Black man, is wearing a T-shirt with a picture of civil rights leader Martin Luther King Jr on it, as well as the words “Get Your Knee Off Our Necks” and the letters “BLM” for Black Lives Matter.

Mitchell is one of only two jurors who have publicly identified themselves since the high-profile trial.

In a questionnaire, potential jurors were asked if they had taken part in any of the protests against police brutality that followed Floyd’s May 25, 2020 death.

Mitchell said he had not and could serve impartially. He told the Minneapolis Star Tribune that the photo was taken at a march he attended in Washington in August 2020 to mark the anniversary of Martin Luther King’s famous “I Have a Dream” speech.

Jeffrey Frederick, a jury selection expert, said Mitchell’s answer may be “technically correct” since the Washington event was billed as a commemoration.

“It’ll be up to the judge to conduct questioning and to make a determination as to whether or not he felt that this juror was biased and, possibly, had lied during the course of voir dire or on the juror questionnaire,” Frederick told AFP.

The judge would then decide whether it “reaches a standard for affecting the outcome of the trial,” he said.

“The bar is high in terms of misconduct and the granting of a new trial,” he added. “Such determinations are rare.”

“Judges do not want to declare mistrials, particularly in a case where there has been a verdict and given the special circumstances of this case,” Tuller said.

Yilmaz, Mbappe and Neymar nominated for Ligue 1 player of the year

Briones urges teachers, other DepEd workers to get vaccinated vs COVID-19

DOT: No trees will be harmed in building of big vaccination hub on Nayong Pilipino lot

Time to hurry up immunization before vaccines expire – Bayan Muna

Esperon: ‘The master red-tagger is no other than Jose Maria Sison’

COVID-19 after vaccines: ‘You can still get infected if you are careless’

4 Zambales children get coronavirus from grandma

Why Maxene Magalona thinks it is healthy to acknowledge negative feelings

PBA teams could all resume training by May 20; Mid-June opening eyed

Chinese teams score own goals in ‘outrageous’ bid to lose