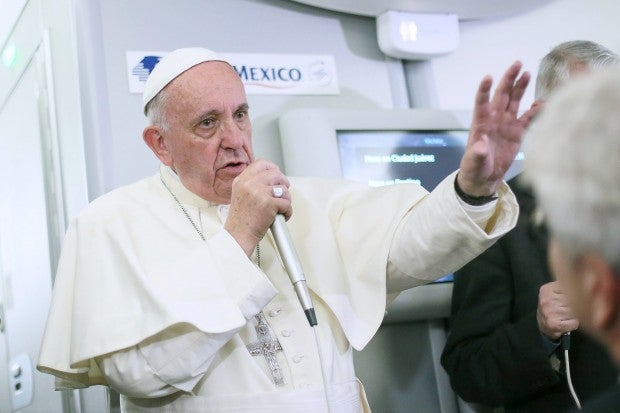 In this photo taken Wednesday, Feb. 17, 2016, Pope Francis meets journalists aboard the plane during the flight from Ciudad Juarez, Mexico to Rome, Italy. The pope has ordered the expulsion from the priesthood of a man accused of sexually abusing minors. AP FILE

Cristian Precht already had earlier been suspended from priestly duties for five years after an investigation into similar allegations. He is now in his late 70s.

Precht headed the Chilean church’s office in defense of human rights in the 1970s during part of the dictatorship of Gen. Augusto Pinochet.

Chilean authorities last month raided the headquarters of the country’s bishop’s conference as part of a widespread investigation into sex abuse committed by members of the Marist Brothers order.

The pope earlier ordered an investigation and denounced a “culture of abuse and cover-up” in Chile’s Catholic Church. /cbb

Ole Gunnar Solskjaer: I Think it was a penalty against Aston Villa
Philadelphia played in t-shirts with the names of black people who died at the hands of the police
Kompany tries everything at Anderlecht: he coached without a license (terrible), played 15 matches and invested 3 million euros in the club
Aston Villa coach on Manchester United penalty: A shameful decision
Paul Pogba: Winning the Europa League and the FA Cup are two of Manchester United's goals for this season
Manchester United's first ever Premier League win 4 consecutive games with a difference at least 3 goals
Brunu has scored 7 (4+3) points in his last 3 games for Manchester United
Source https://newsinfo.inquirer.net/1033154/vatican-expels-chilean-priest-accused-of-sexual-abuse

Three COVID-positive players tee off together at PGA event

Fair weather in most parts of PH on Friday

Pandemic could push 45 million in Latin America into poverty – U.N.

Tiger Woods to return next week at Muirfield Village

Most of Wall Street wilts amid worries on virus, economy

Landbank offers low-interest loans of up to P300K to parents

Migrant cat must go into quarantine, too

Marcial meets with coaches and managers for return-to-practice measures

We have to reopen the economy

Anakbayan-Makati blasts ‘Bato:’ It’s you who should find another job

Female power: These actresses are done compromising the things they believe in

Samsung brings together the complete TV experience and art appreciation

Medicine, healthcare just a tap away

Volkswagen can be sued anywhere in EU, says top court

6 killed in van-truck collision in Pakistan