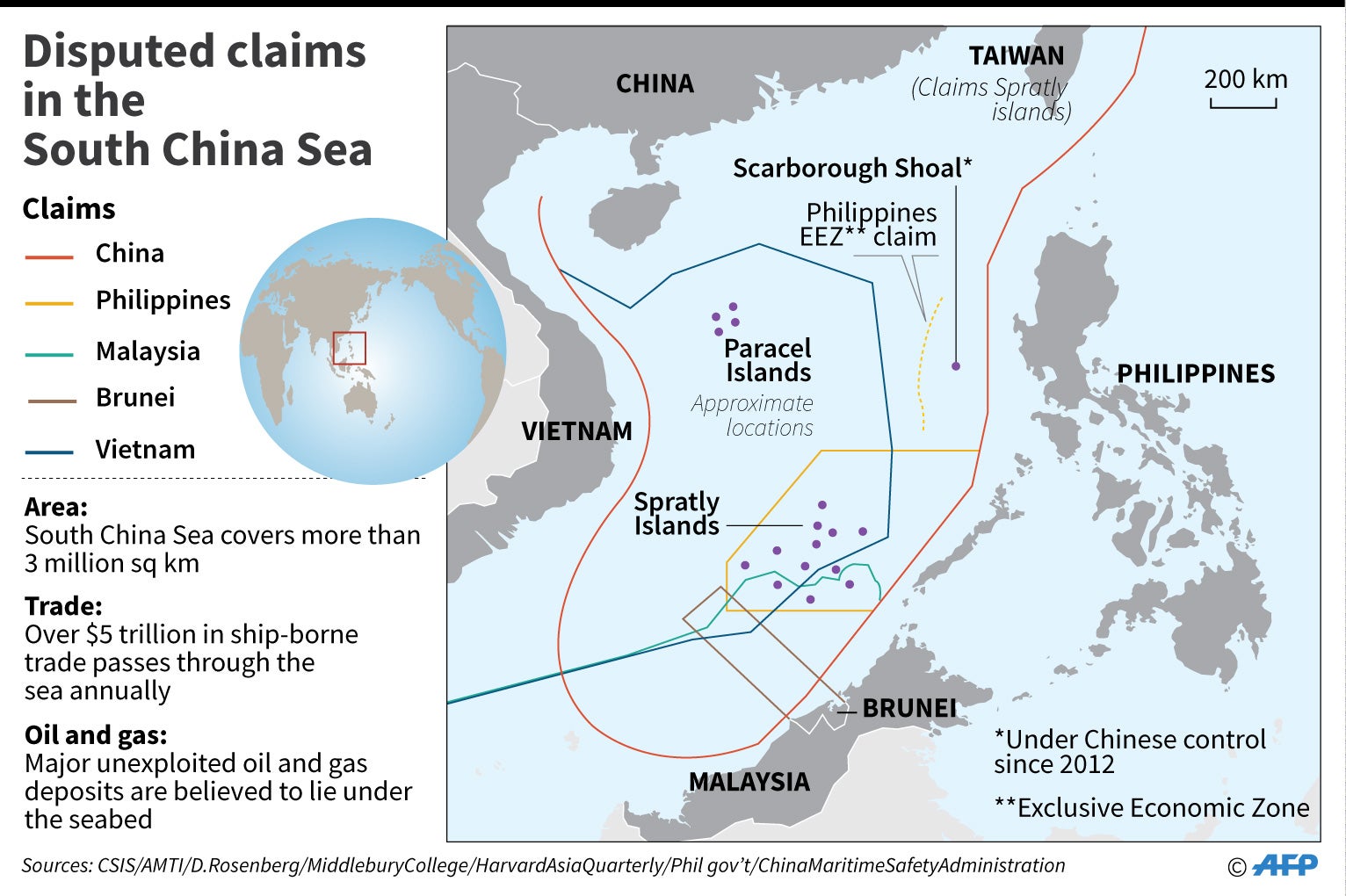 HANOI — Vietnam has accused China of trespassing and demanded a Chinese survey ship in the South China Sea withdraw in the latest flashpoint over the disputed territory.

The two countries have long been locked in a maritime disagreement over the resource-rich waters, with the Chinese claiming nearly all of it.

But the international community has largely sided with the other claimants — Vietnam, Philippines, Indonesia, Malaysia, Taiwan, and Brunei — citing the importance of freedom of navigation.

On Friday, Vietnam’s Ministry of Foreign Affairs criticized China’s survey vessel the Haiyang Dizhi 8, and its escort ships, for entering its waters in “recent days,” although it did not give exact dates.

“This is completely in the sea area of Vietnam,” a statement said, adding they had contacted the Chinese multiple times, on different diplomatic channels, “to protest” the act.

The Vietnamese have “persistently requested them to… withdraw all these ships from Vietnam’s waters and respect its sovereignty.”

While the Chinese did not confirm the presence of the vessel in the South China Sea, a Ministry of Foreign affairs spokesman said Wednesday that they hope Vietnam “can truly respect China’s… jurisdiction” over the waters.

“We hope that the Vietnamese side can… refrain from taking actions that may complicate the situation,” said spokesman Geng Shuang.

In June, a Chinese vessel and a fishing boat from the Philippines collided in the South China Sea, sparking public outrage as Manila accused the trawler of abandoning the 22 Filipino crew members.

China defended itself, saying their ship had “bumped” into the vessel and had attempted a rescue — but were “afraid of being besieged by other Filipino fishing boats.”  /muf

Sheffield will finish the Premier League season without defeats from clubs from London. 22 points in 10 games and 5 home wins
Bonucci on Juve's draw with Atalanta: We must look at the result. This is how Championships are won
Sterling surpassed Yaya Toure to become Manchester City's 2nd goalscorer in the history of the Premier League
Gasperini on two penalties for Juve: They are above any rules in Italy. Did we have to cut off our hands?
Sarri Pro 2:2 with Atalanta: We played with one of the best teams in Europe right now
Pep Guardiola: Manchester City have won a place in the Champions League on the pitch. I hope that UEFA will allow us to play
Atalanta extended their unbeaten streak to 14 games and is ranked 3rd in Serie A
Source https://newsinfo.inquirer.net/1144033/vietnam-criticizes-china-over-vessels-in-disputed-waters

Pistons’ onetime home, the Palace of Auburn Hills, torn down

‘The scariest’: What people are saying about ‘Aswang’

Android Users, Here's How to Prevent Your Facebook Info From Being Stolen

LIST: Where to get drive-through coronavirus tests in the PH

No masks on red carpet as Taiwan logs few cases

Let's Taco 'Bout It: Great-Tasting Tacos You Can Feast on at Home

Palace: Duterte 88% healthy,  just like any other man his age

This Online Shop's Succulent Dish Gardens Are Too Pretty for Words

As virus rages in U.S., Trump finally wears a mask

As coronavirus rages in US, Trump finally wears a mask

These Quirky Handcrafted Earrings Are for Fans of Pinoy Street Food