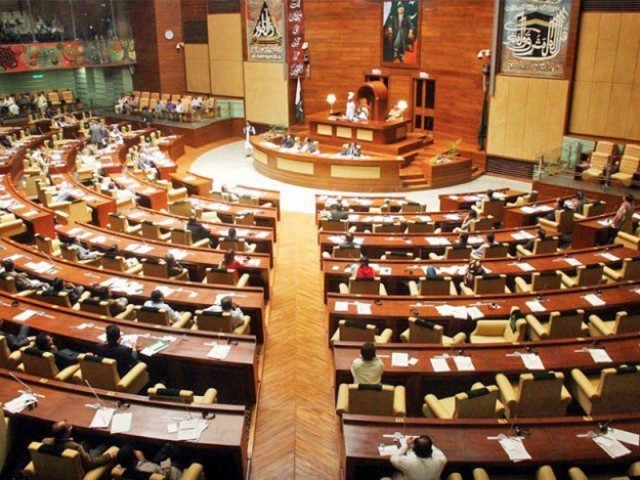 Deputy Speaker Rehana Leghari, who was chairing the session, denied that the session was summoned to facilitate anyone. PHOTO: ONLINE

KARACHI: With no end to the Sindh Assembly session in sight, the opposition MPAs now feel that the proceedings are a waste of time and public money. “The Sindh Assembly is being run on production orders,” remarked Leader of the Opposition Firdous Shamim Naqvi on the assembly’s floor on Friday.

“Please don’t make it production order business for particular people, who are supposed to be in the National Accountability Bureau’s (NAB) custody,” said Naqvi, referring to Sindh Assembly speaker Agha Siraj Durrani and Pakistan Peoples Party (PPP) MPA Faryal Talpur, who are currently in NAB custody in separate cases and are brought to the assembly on production orders. “Neither do we pass laws nor do we debate on issues of public importance. Why are we wasting public money?” he questioned, pointing to the month-long budget session that has been ongoing since June 12.

“Can anyone tell me how many bills have been passed in this month? If there is no legislation why have you continued this session?” he asked, adding that there were particular days mentioned in the rules of procedure to run the session, but it continued without any break. The opposition members thumped their desks in agreement.

Deputy Speaker Rehana Leghari, who was chairing the session, denied that the session was summoned to facilitate anyone. “No, this is not the issue,” she said.

Earlier, Sindh Local Government Minister Saeed Ghani confessed in the house that illegal buildings are being constructed in Karachi. Responding to a call-attention notice moved by Muttahida Qaumi Movement-Pakistan (MQM-P) MPA Kanwar Naveed Jameel regarding the construction of commercial plazas on residential plots in Liaquatabad, he said, “I admit that illegal construction continues and despite our efforts, we have been unable to stop it.”

According to Ghani, it is the Sindh Building Control Authority’s job to ensure that all constructions are legal and abide by the rules, but his department has now formed a committee under the supervision of a special secretary to identify buildings, people and government officials behind the illegal structures. “We have already taken action against our own officers involved in this practice and will continue to take action,” he remarked.

Around 80 per cent of the agenda was left unattended on Friday. The deputy speaker, who started the session at 11:50am, adjourned it after the question-answer session of the women department and a call attention notice till Monday.

Many call attention notices about public interest issues, besides privilege and adjournment motions moved by MPAs belonging to opposition parties, could not be taken up. “It’s Friday today and we all have to attend Juma prayer. So please adjourn the session today and always summon it after prayer timings,” said PTI MPA Khurrum Sher Zaman.

Most members from opposition and treasury benches endorsed the idea to hold the session after Juma prayer. “I adjourn the session and let’s meet on Monday,” said the deputy speaker.

During the question-answer, Minister for Women Development Shehla Raza responded to various queries about the workings of her department. She informed the House that they have drafted some important bills, including one against harassment in the workplace, an anti-dowry bill, functions related to marriages, amendments in the domestic violence law and acid attack bill. “My department, in consultation with women’s rights organisations and the Sindh Commission on Status of Women’s Rights, has finalised the anti-harassment law and sent it to the law department. Hopefully, it will be presented in the House soon,” he said.

Efforts underway to give boost to construction sector: Shibli