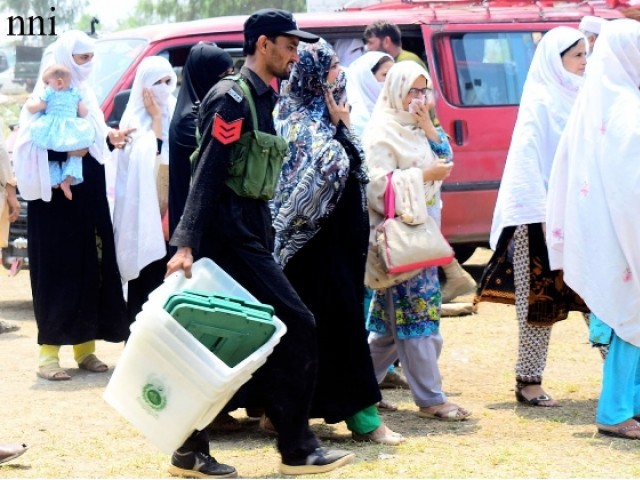 For the first time in over seven decades, voters from Khyber- Pakhtunkhwa’s tribal districts are casting their ballots to elect their representatives for the provincial assembly. The race is expected to be highly competitive today.

Voters from the erstwhile Federally Administered Tribal Areas (Fata) are taking part in the first polls after being merged with Khyber-Pakhtunkhawa (K-P) province in line with the 25th constitutional amendment passed by parliament last year. Earlier, the residents of Fata were only allowed to take part in the country’s lower house polls.

According to the Election Commission of Pakistan (ECP), a total of 285 candidates, including two women, are competing for the 16 provincial assembly seats.

Interestingly, while all major opposition parties are at loggerheads with the PTI-led government in the centre, they have opted for individual campaigns in these elections.

Pundits who closely observed the race have mixed views about the elections. Some are of the opinion that independent candidates are likely to influence the elections.

“Yes, these independent candidates are likely to influence these elections,” said Professor Ijaz Khan, who teaches at the University of Peshawar.

Other political observers believe that the ruling PTI is expected to bag a significant number of seats. It is the only political party that has fielded candidates for every constituency.

Similarly, the JUI –F another major religious party – is expected to do well in South Waziristan, North Waziristan and Kurram tribal districts.

Asfandyar Wali’s ANP is expected to perform well in Khyber and Mohmand tribal districts where the party has campaigned actively.

Meanwhile, the JI is confident about their party’s victory from the Bajaur tribal district – considered their political stronghold.

Interestingly, both ANP and JI have fielded two women candidates on general seats in Khyber and Kurram tribal districts respectively, in the heavily male dominated polls.

History in making for tribes people

People across the newly-merged tribal districts unanimously agree on the historic value of today’s elections.

“It is definitely a historic day in the history of tribal areas as it is the first time tribes people will vote for the provincial assembly,” said PML-N candidate for PK-101 Bajaur Nizamuddin Khan Salarzai. He feared, however, that a lack of media coverage may translate into the tribal districts being forgotten once again when it comes to development. Still, he hoped for an election ‘free from fear’ to ensure tribes people’s struggle from ‘bullet to ballot’ is not in vain.

ANP youth leader Noor Islam Safi, meanwhile, hoped that the elections, by placing tribal representatives in Peshawar, will result in a more responsive strategy for the tribal districts. “Although we could elect people in the National Assembly already, we have seen those who went to Islamabad lost touch with the tribal areas,” he said.

“This certainly is a great moment for the tribal areas,” said journalist Haq Nawaz. “Where once our fate was decided by the bullet, today tribes people are moving on from the past and on to the ballot,” he told The Express Tribune. He hoped the elections would result in greater funds for the tribal regions.

A total of 2.8 million voters, including 1.67 million men and 1.13 million women, are eligible to vote to elect their representatives for the provincial assembly.  The voting will take place under tight security at 1,896 polling stations, of which 482 are for men, 376 for women, and 1,038 are combined.

In addition to 16 seats, there are five reserved seats – four for women and 1 for minorities – which will be filled in line with the number of votes each party attains in the general polls.

Bajaur district consists of the largest number of voters which is 534,003 followed by Khyber district, which has 532,087 voters. Three seats each have been allocated for the two districts.

The election commission has also given district returning officer (DRO) and returning officers (RO), the authority of magistrate under which, they will be able to take actions against violators of the code of law.

According to ECP spokesperson, after receiving the results ROs will send the results to the provincial election commission.

The poll body has sought military’s assistance to conduct the elections in the region, which has witnessed threats from militant groups in the past.

Under the special security arrangements for the polls today, Pakistan Army troops will be deployed at highly sensitive and sensitive polling stations while CCTV cameras have also been installed to monitor sensitive polling stations.  In addition to the military, over 10,000 police officials are also being deployed across the region.  Pakistan Army will control the security arrangements.

North and South Waziristan and Khyber have been termed sensitive districts, According to the plan, 2,000 security personnel, including levies and policemen, are deployed in North Waziristan district.

The poll body has declared 554 polling stations as highly sensitive, while 461 have been termed as sensitive. The remaining 882 have been declared as normal.

Out of 103 polling stations in PK-101, four have been declared highly-sensitive, 13 have been termed sensitive and 86 normal.