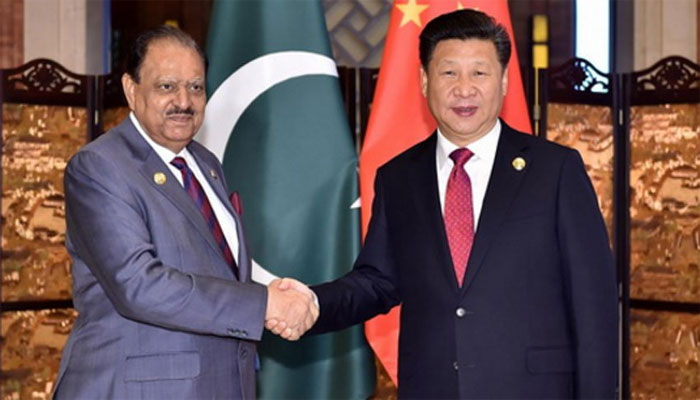 BEIJING: Within a period of two months, another high-level meeting is set to be held with Chinese President Xi Jinping to boost Pakistan China ties.

“Pakistan and China will sit together at the highest level and undertake to bilateral cooperation especially in the contest of China Pakistan Economic (CPEC) which is making smooth progress, but we have other areas of cooperation which are coming under CPEC, which would be discussed during the meeting” he added.

The upcoming 18th Shanghai Cooperation Organization (SCO) summit will be held from 9-10 June in Qingdao Shandong province of China, Mamnoon Hussain would lead the Pakistani delegation.

President of Pakistan will deliver the keynote speech during summit where he will define and outline Pakistan’s perspective on regional an international development and what kind of role Pakistan can play said, Masood Khalid.

Masood Khalid further said “The role of SCO and its common objectives for better understanding and goodwill between the people of SCO member states through better connectively, economic and trade road and transportations and communication linkages, these are important objectives which would be discussed during summit”

According to Ambassador, President of Pakistan is also expected to hold the bilateral meeting with other leaders of SCO member states, which we have an opportunity to review our relationship with SCO member states.

Masood stated that SCO is taking in that place which we have extremely close and friendly tie. This is the first-time head of state-level summit which Pakistan is attending as a full member state of SCO, Pakistan and India were acknowledged as full members of the SCO at last year in Astana summit.

“The Shanghai Cooperation Organization has made remarkable achievements in the past” he added.

SCO was founded in Shanghai on June 15, 2001, is composed of China, Russia, Kazakhstan, Kyrgyzstan, Tajikistan, Uzbekistan. It also has Afghanistan, Iran, and Mongolia as its observer states whereas Belarus, Turkey, and Sri Lanka as dialogue partners.