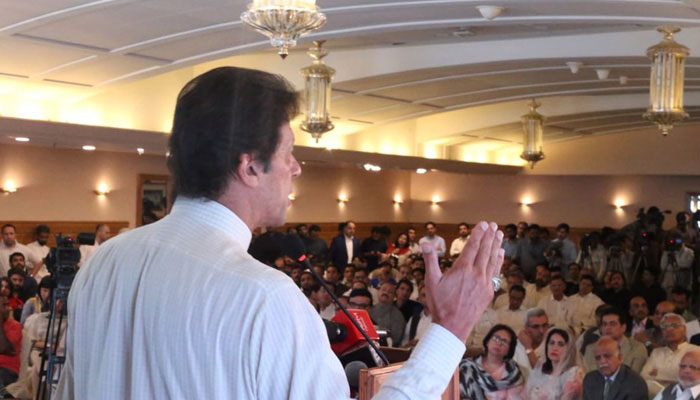 KARACHI: Prime minister Imran Khan has made some bold announcements in Karachi, including giving nationality to immigrants from Bangladesh and Afghanistan.

The Prime Minister says children of Afghan and Bengali refugees and migrant workers in Pakistan will get Pakistani passports.

He said that Karachi's underclass has moved towards criminal acts when they don't have access to education and jobs. "This zulm needs to end".

"A deprived class is turning to crime, we will address this immediately," he added.

"We need to uplift the poor and underprivileged. We have the Chinese model to emulate that moved 70 million people from the poverty line," he said.

He said that the crime in the metropolis is a result of lack of justice.

PM Khan said that waste disposal is a huge issue for the city, adding that he is giving the Sindh government two more months to address the issue otherwise the federal government will take charge.

He appreciated that the target killing numbers are down in the city but the street crime is increasing in the city due to joblessness.

"A deprived class is turning to crime, we will address this immediately," he added.

PM Khan promised the people present in the event to reforest Karachi. He said that the city is currently a concrete jungle and called it 'a heat trap'. "We will work to formulate and incorporate "Green Karachi".

The premier said that Governor Houses has exorbitant costs for the people of Pakistan.

"In a country where 43% of our children have stunted growth & millions out of school, how can we afford this ostentatious lifestyle?" he said.

The premier said that the federal government will address supply of water and transport in Karachi on an immediate basis and the construction of a Northern bypass to address traffic issues.