The National Government has concluded its consultation in preparation for the 2023 national budget.

The Budget Coordinating Committee (BCC) from the three government central agencies conducted the post-budget consultation following the launch of the 2023 Budget Strategy on Tuesday 13th September.

Permanent and Deputy Secretaries, Heads of Divisions, Financial Controllers, Human Resource Managers (HRMs) and Senior Government Officials from government ministries gathered over the four days to speak on issues of importance that will be reflected in the budget, and ensure the government deliver key priorities for 2023 fiscal year. 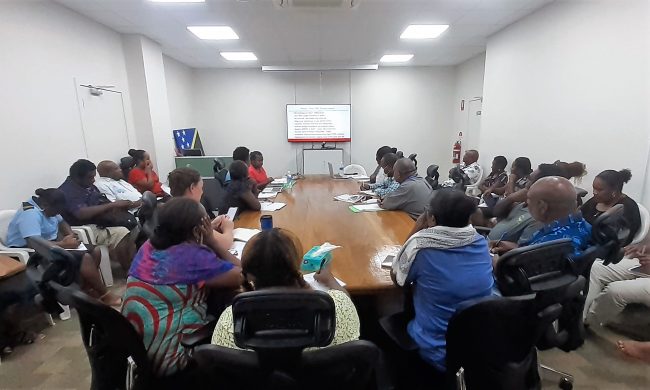 These guiding principles aligned to the overarching policy direction of the government as highlighted at the launching of the Budget strategy for 2023. The consultation also covered the 2023 Pacific Games preparation

MNPDC Chief Planning Officer (Budget), Dan Lenny highlighted that government ministries and agencies will use the 2022 budget baseline as guide when preparing their budget submission for 2023.

Ministries are to consider SIG existing contracts and obligations and trade-off between existing programmes and projects to support the 2023 Pacific Games related activities.

Ministries are also urged to streamline submissions to key priority areas as highlighted during the 2023 Budget Strategy launch.

Principal HRMIS Officer, Wendilyna Wale of the Ministry of Public Service highlighted that next year, the government will direct its resources towards the Pacific Games and the National General Election.

“MPS anticipates that business of government ministries and agencies will be slow as government officers and resources will be deployed towards these two major events.”

She said the 2023 Payroll Budget will still focus on the Productive and Resources Sector, primarily as a means to ensure that activities are geared towards ensuring economic stability, while also supporting the human resource capacity of fundamental and social sectors to achieve the DCGA redirection policy priorities.

During the 2023 Budget Consultation, government line ministries were given time to raise their activities and pressures pertaining to the 2023 budget for consideration by the three government central agencies.

By 30 September 2022, budget bids from government ministries will be submitted to MoFT, MNPDC and MPS for appraisal and compilation before proceeding on to the Budget Strategic Committee (BSC) and Cabinet for approval.

It was also confirmed that other stakeholders will be consulted in coming weeks before the final budget proposal will be presented to the Government.