The Japanese government through its embassy office and the United Nations Development program (UNDP) yesterday handed over Information and Communication Technology (ICT) equipment to the Solomon Islands Independent Commission Against Corruption (SIICAC) and the Anti-corruption Secretariat.

The ICT equipment worth SBD214,751 donated under the Transparency and Accountability Project (TAP) created by UNDP, the government of Japan and Solomon Islands to boost SIICAC’s efforts in fighting corruption in the country. 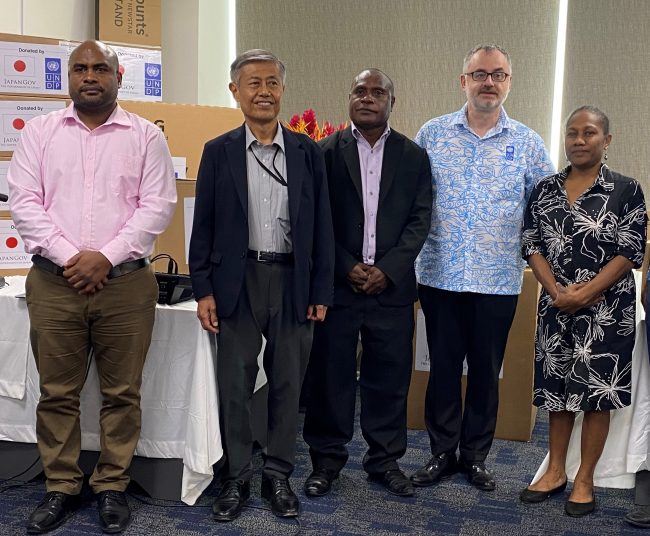 Speaking during the handing over Deputy Secretary óf the Policy and Programs within the Prime Minister’s Office Mr Tony Kabasi thanked UNDP and Japan for supporting SIICAC.

“This ceremony is a testament of the genuine partnership between the government of Solomon Islands, the government of Japan and UNDP, on that note on behalf of the office of the prime minister I wish to extend our sincere appreciation for the support given,” Mr Kabasi said.

Mr Kabasi said since the inception of the TAP program the project has become the lead initiative to support the objectives of the National Anti-corruption strategy and Solomon Islands government’s policy to strengthen the capacity of the integrated institution to combat corruptions.

“The project also provides technical and expert advice to the government through the anti-corruption secretary under the OPMC commission program unit,” he said.

Mr Kabasi added despite the challenges posed by covid-19 the project’s achievements so far is commendable.

“Our work at the end of the day is about change, for that to happen we need institutions and them being strengthened is one of the cornerstones of any assistance we can provide. So we are happy and pleased that Solomon Islands and the Pacific region as a whole have partners and supporters such as Japan,” Mr Bauadze said.

Japanese Ambassador to Solomon Islands His Excellency Miwa Yoshiaki said fighting corruption is a challenge for all countries and that there are two alternative ways available.

“The first one is very democratic where you expect the initiative of the civil society to create common understanding and red line that we should never go beyond, another is the extreme which is the authoritarianism which I don’t support at all, people will fear strict procedures of the government this kind of procedure should not contribute to the development of our society,” Mr Yoshiaki.

SIICAC has been supported by UNDP and the Japanese government through the TAP project since 2018.