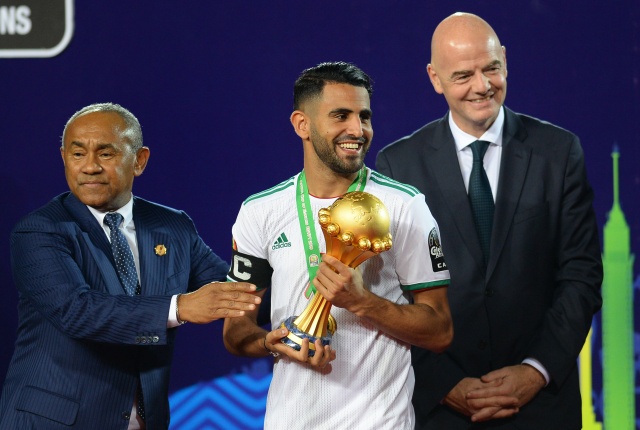 Fifa President Gianni Infantino (R) and Confederation of African Football (CAF) President Ahmad Ahmad (L) hand over the trophy to Algeria's forward Riyad Mahrez after the 2019 Africa Cup of Nations (CAN) Final football match between Senegal and Algeria at the Cairo International Stadium in Cairo on July 19, 2019. (MOHAMED EL-SHAHED / AFP)

Bounedjah gave Algeria a dream start against Sadio Mane's Senegal, the top team in Africa, in front of a large Cairo crowd when his deflected shot looped over Senegal goalkeeper Alfred Gomis.

The second-minute strike was enough to propel Algeria to a first Cup of Nations title in 29 years, and the country's first on foreign soil, having lifted the trophy as hosts in 1990.

"I'm very happy. Our whole nation, our people were waiting for this second star for a long time," said Belmadi, who took charge of a squad in disarray last August.

"It's our first Cup of Nations won away from home. It's incredible especially when you look at where we came from.

"I took over a team that was really struggling. To do what we've been able to do, and to put ourselves on the top of Africa in 10 months, is extraordinary."

The steely Belmadi signalled his intent early in his reign when he said his ambition was to make a run at the title in Egypt, despite inheriting a team that crashed out in the 2017 group stage and then fared woefully in World Cup qualifying.

"I said we were going to the Cup of Nations to win. I wanted to send a strong message to the players, to tell them I was committing to a strong project. Titles are what interest me," he recalled.

"I was asked if it was a transitional period. No, we're here (champions)."

For Senegal, who also lost to Algeria 1-0 in the group stage, the long wait for a first continental crown goes on as coach Aliou Cisse, the captain of the 2002 runners-up, again fell short in the final.

"We conceded the goal very early and on the whole I think we deserved to equalise but it didn't happen," said Cisse, on the losing end in the first title-decider to feature two African coaches since 1998.

"I want to congratulate my players. We've been working together a long time for this Cup of Nations and we wanted it but tonight it didn't go our way."

Senegal had understandably feared the absence of Napoli star Kalidou Koulibaly, banned after two bookings in the knockout rounds, although his replacement Salif Sane was desperately unlucky as Algeria grabbed the lead with scarcely a minute played.

Bounedjah took aim from 20 yards with his effort smacking off the defender before arcing high into the air and dropping underneath the crossbar and beyond a static Gomis, sparking delirious celebrations from both players and fans, some of whom arrived for the final on military planes provided by the Algerian government.

It was the first time Gomis had conceded in almost 400 minutes in Egypt having replaced the injured Edouard Mendy ahead of Senegal's final group game.

A tetchy encounter saw both sets of players embroiled in a scuffle as they headed for the tunnel at half-time, while Senegal thought they had won a penalty on the hour after a suspected handball by Adlene Guedioura.

Cameroonian referee Alioum Alioum initially pointed to the spot but reversed his decision after a VAR review.

Rais M'Bolhi tipped over a fierce drive from Youssouf Sabaly after Mbaye Niang screwed wide from a tough angle having rounded the Algeria 'keeper, and the Desert Foxes held on to emerge worthy winners of the expanded 24-team event.

"It's incredible. The win is for the whole country," M'Bolhi told beIN Sports. "It's a bit hard to soak in right now but I think we'll realise what we've done when we return home," he added.

CAS did not establish the majority of Manchester City's alleged violations
Manchester City: the Club welcomes the decision of the CAS and thanks for the correct judicial process
Mourinho's classic plan for big matches worked perfectly. Arteta's crude Arsenal is a convenient target
Bartomeu on Xavi in Barca: There is a time for everything. We are not looking for a coach right now
Mourinho about the Europa League: Ask Hamilton if he wants to win Formula 2
Manchester City will play in the Champions League. CAS has accepted the appeal
Carragher on the Premier League: Liverpool can repeat success, but need transfers
Source http://www.seychellesnewsagency.com/articles/11352/Algeria+sink+Senegal+to+claim+%27incredible%27+second+African+crown

Trial of 5 suspected Somali pirates to begin in Seychelles Aug. 30

Brazil's president contracts virus as US starts WHO withdrawal

13 more sailors in Seychelles have COVID; warning given on social gatherings

US 'looking at' banning TikTok and other Chinese apps: Pompeo

400 people -- Seychellois and foreigners -- have lost jobs in tourism downturn

Virus sours July 4 celebrations in US as Mexico cases soar

5G rollout in Seychelles met with mixed views on speed, price and health

Nearly 190 Seychellois could lose jobs due to COVID slowdown

Need an island-inspired facemask? These 4 shops in Seychelles can help

COVID cases in Seychelles rise to 69; no plan to close borders

Former Burundi president to be buried in state funeral

Maldives to reopen tourist resorts from mid-July after virus closures

In midst of pandemic, E. Africa braces for another locust invasion

Over one percent of humanity displaced: UN

3 island resorts in Seychelles that have re-opened after COVID

Lebanon president to discuss security after days of protests