National silat coach Romadhon, 33, dies after accident in Bali, was holidaying with family after SEA Games

SINGAPORE - Barely a week after a triumphant outing at the SEA Games in Hanoi, the national pencak silat squad were dealt a heavy blow with the sudden passing of coach Mochammad Ichsan Nur Romadhon.

The Indonesian died early on Saturday (May 28) in a road accident in Bali, where he was on holiday with his family following the Games' conclusion on Monday.

A former national athlete for Indonesia, Romadhon was 33. He is survived by a wife and two young daughters.

He had been employed by the Singapore Silat Federation (Persisi) for eight years and was one of four coaches in charge of Singapore's tanding (match) athletes in Hanoi, where he helped guide them to three gold, two silver and two bronze medals.

Silat returned from Vietnam with a total haul of four golds, three silvers and four bronzes, their best-ever showing at the biennial multi-sport affair.

"Even though he was from Indonesia, he gave all his heart to us and went through ups and downs together with Singapore silat through the years. Losing him is really saddening," said Sheik.

Women's tanding Class F (70-75kg) bronze medallist Siti Khadijah Shahrem said in an Instagram story: "You've done so much for me, your athletes and the country.

"Thank you for everything coach... we love and appreciate you coach." 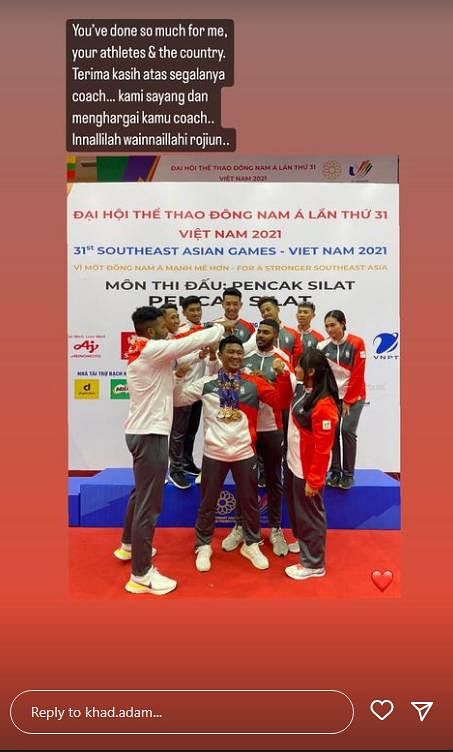 In a post on Facebook on Saturday, Persisi said: "Well-loved by everyone in the silat community, coach Romadhon has contributed tremendously to the team's achievements.

"Our sincerest condolences to his loved ones. We share in this time of grief, but also share in all the love and memories."

Persisi is conducting a drive to collect donations for Romadhon's widow. Those keen to contribute can contact the association directly through its Facebook page.

According to Sheik, donations to the family can be sent via Paynow or bank transfer:

Donors should indicate their names when they make their contributions.