A popular hangout for bats, tourists and now Covid sleuths 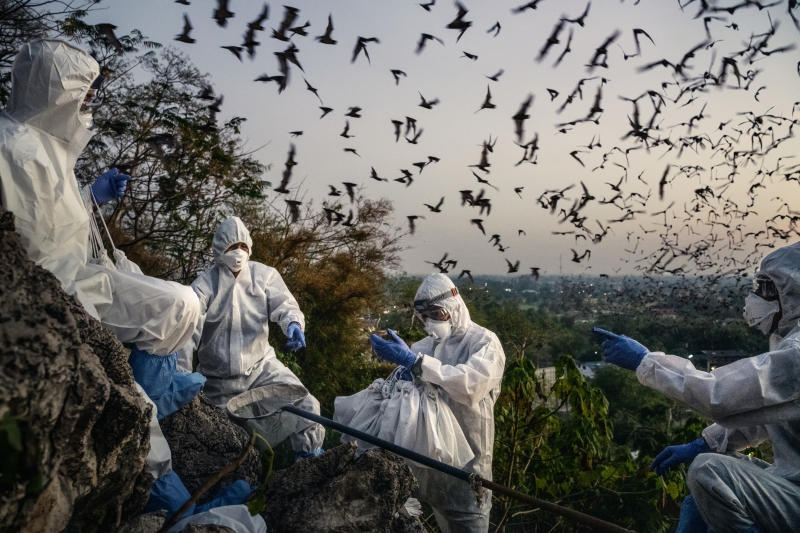 A team of researchers catch bats as they fly out of the Khao Chong Phran cave at dusk near Photharam district in Ratchaburi province, Dec 11, 2020. (New York Times photo)

In the murk of the grottoes, in a cave complex west of Bangkok, people in headlamps and with flashlights went about their business.

Pilgrims to the temple that owns the complex prayed to Buddha figurines in one of the caves, the statues’ carved expressions betraying no reaction to the plip-plop-ploop of bat droppings falling on their shoulders.

Collectors of bat dung, or guano, scraped up the droppings to sell as fertiliser, hefting bags of manure through an obstacle course of stalactites and stalagmites.

And medical researchers, overseen by one of the world’s foremost bat virologists, trapped the winged mammals to test them for traces of the coronavirus that causes Covid-19. Scientists believe it originated in bats.

Outside the complex, the abbot of the Buddhist temple, which calls itself the “temple of hundreds of millions of bats,” took to a loudspeaker to tell visitors that the resident flying mammals were harmless.

“Don’t worry. These bats don’t carry disease because they are insect-eating bats,” Phra Khru Witsuthananthakhun, the abbot, said. “Everyone knows that when fruit bats eat fruit, they share it with other animals, such as rats, and that’s how disease spreads.”

The temple’s abbot is correct that fruit-eating bats have been linked to serious viruses that have leapt into the human population. But insect-eating bats have given humans their share of deadly illnesses. Many virologists believe the horseshoe bat, an avid bug eater, may be linked to the coronavirus that causes Covid-19. And a national park report identified a species of horseshoe bat in the caves.

The area around the caves, Photharam district in Ratchaburi province, has tied its fortunes to bats — drawing tourists, fertiliser companies and, most important of late, chiropterologists, scientists who study flying mammals.

At the local economy’s tiny, fluttering heart — some bats can vary their heart rate by 800 beats per minute — is Khao Chong Phran Temple, which owns the limestone grottoes where the bats shelter during the day. In one cave alone, there are 3 million bats from 10 different species.

Nearly one-quarter of the world’s mammal species are bats, and their ability to fly while hosting a petri dish of viruses makes them both zoological marvels and efficient vectors of disease. Infectious diseases that are believed to have emerged from bats in recent decades include coronaviruses that cause severe acute respiratory syndrome (SARS) and Middle East respiratory syndrome (MERS), along with other viruses like Nipah, Hendra and Ebola.

Most of these viruses were transferred from bats to an intermediate host, like a palm civet or camel, before making their way to humans.

Although the coronavirus that causes Covid-19, which came to public attention in late 2019, has not been conclusively traced to bats, in Yunnan province in southwestern China, a researcher found evidence in horseshoe bats of a virus that closely resembles it. Horseshoe bat droppings from Cambodia have also shown some linkages. And the same bat family was the natural reservoir for the SARS coronavirus.

The discovery of the possible connection between horseshoe bats and the coronavirus linked to Covid-19 prompted Dr  Supaporn Watcharaprueksadee, deputy chief of the Center for Emerging Infectious Disease of Thailand and a specialist in bat-borne viruses, to investigate whether bats here may share a similar viral load.

Ms Supaporn said her team has found no trace of a coronavirus similar to the one that causes Covid-19 in the bats of Khao Chong Phran Temple, although other coronaviruses have been discovered there. Nor has she found any horseshoe bats there.

Testing of human residents in and around Khao Chong Phran, including of guano collectors who have spent decades in proximity with bats, turned up no antibody evidence of the virus, either. 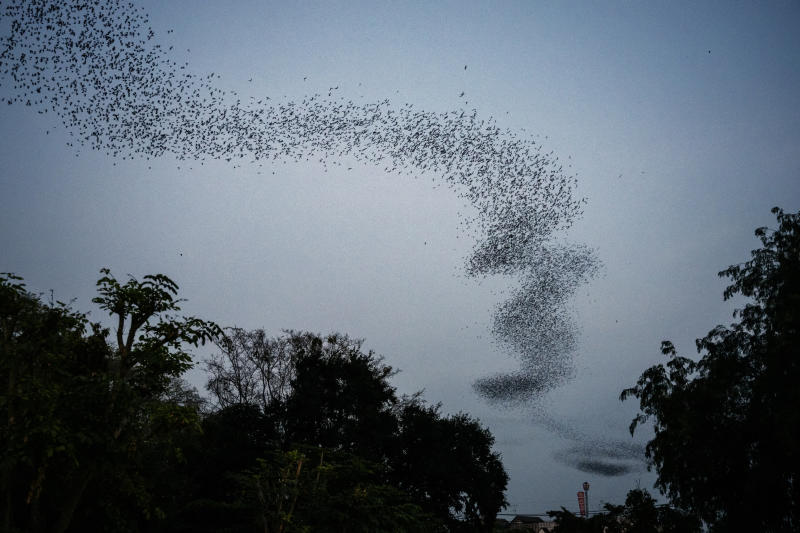 Hordes of bats stream out of Khao Chong Phran cave at dusk, near Photharam district in Ratchaburi province, Dec 13, 2020.

Nevertheless, the sight of researchers, clad head to toe in personal protective equipment, has surprised a community that relies on bats as its economic mainstay.

“There’s no Covid here,” said Auenjit Kaewtako, a district health volunteer who has been coming to Khao Chong Phran for 40 years. “Why should we blame the bats?”

Although Thailand was the first country outside of China to confirm a case of Covid-19 — in a Chinese tourist visiting in early January — the nation had appeared since May to have all but strangled local transmission. People have been generally vigilant about wearing face masks, and the country’s borders were ordered closed to prevent the virus from arriving from abroad.

But in recent weeks, the coronavirus has begun spreading across the nation after first being identified in migrant communities entering through the porous border with Myanmar. Thailand went from no cases of local transmission in months to reporting hundreds of cases a day in late December and January.

Xenophobia has spiked, along with chiroptophobia, the fear of bats.

In the view of the guano collectors of Khao Chong Phran, which is not far from the frontier with Myanmar, the anxiety caused by bats is overblown. There are 17 species of bats in the area, and only two are fruit-eating bats tied with the spread of disease, they say. The rest consume insects, which means the bat droppings shimmer with iridescent residue from bug wings.

“Even before my grandfather’s generation, we collected guano from the caves,” said Jaew Yemcem, 65, resting on the temple grounds with her bare feet nestled in soft mounds of bat excrement. “They were fine, and we are fine.”

Every Saturday morning before dawn, Khao Chong Phran allows guano collectors, some wearing homemade balaclavas to protect themselves from dripping dung, to enter the caves and mine for the nitrogen-rich fertiliser. Many of the workers walk barefoot to better negotiate a ground slippery with condensation and bat gunk.

After buying the guano from the collectors, the temple auctions it to farmers or agricultural middlemen, who say just a handful of the fertiliser added an alluring sweetness to guavas and an impressive girth to papayas.

The collectors receive about 25 baht per bucket of guano and can accumulate a dozen pails each day if they are lucky.

In some Southeast Asian countries, bats are prized eating. While temple stalls at Khao Chong Phran once sold barbecued bats, locals no longer eat them because they have been designated protected animals, said Ms Supaporn, who has been researching the area’s bats for a decade.

But Prangthip Yencem, who works as a cook’s assistant at a local school during the week and mines guano on Saturdays, said bat consumption, while lower, continues. Bat tastes good in any number of preparations, she said, including sautéed with chile and holy basil or deep-fried with garlic and white pepper.

For men, bat blood with a shot of alcohol is an invigorating cocktail, she said.

Residents of the area do not hunt bats anymore since the abbot has warned them against it, Ms Prangthip said. But if the odd bat happens to fly into a telephone pole and plummets to the ground, who would turn down a free meal?

“Even now people eat bats,” she said, “and they don’t get Covid.”

The population of bats in Photharam district has declined in recent decades, victims of the urban sprawl that is eating up rural Thailand. The heavy use of pesticides has also deprived bats of their food.

With fewer bats around, there is half as much guano collected as a decade ago. The existence of fewer bats has disrupted pollination patterns, harming tropical ecosystems in a similar way to the decline in bees.

And, crucially, some bat virologists believe a spike in stress among bats could make the animals more vulnerable to symptoms of disease, possibly increasing the chances of viruses leaping to other species.

Normally, bats can live healthy lives with multiple viruses coursing through their bodies. But the accoutrements of human development — tall buildings, electricity wires and expanses of cement — may stress bat bodies as they work overtime to use echolocation, the pinging of sound frequencies to determine their surroundings.

Phra Somnuek, now a monk at the temple, remembers when he was a child the sky darkened for more than two hours at dusk with the shadows of millions of bats heading out for their evening feeds. The flight of the bats, still a tourist attraction, is now done in 45 minutes, he said.

“I’m worried that one day bats will only be a legend here,” he said. “If we lose our bats, we lose what makes us special.”

Klopp on 2:0 Sheffield: Many have written off from the accounts of Liverpool. We need to win, we can't get to the Champions League without it
Milan scored their 15th penalty of the season in Serie A - the most in the league. Before the record-three 11-meter
Liverpool scored 7,000 th goal in the top division of England - only Everton has more
Manchester United have 0 wins and 1 goal in 7 matches against the big six this season in the Premier League
The Hudson-Odoi hand show: Maguire said the umpires were told it was a penalty. VAR baffled us
Jota misses the match with Sheffield due to illness, Alisson-due to the death of his father
Loew is ready to consider the return of Muller, Hummels and Boateng to the national team
Source https://www.bangkokpost.com/thailand/general/2052371/a-popular-hangout-for-bats-tourists-and-now-covid-sleuths