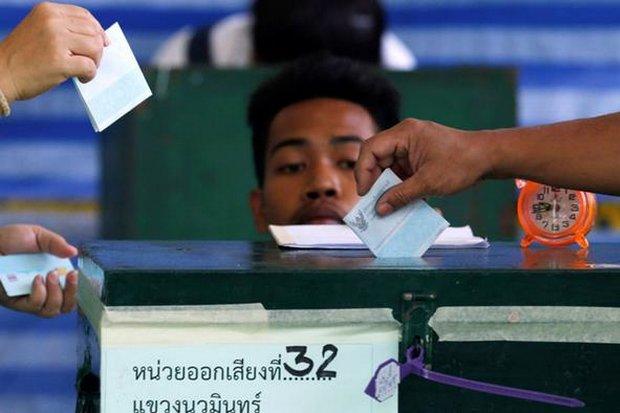 The Election Commission is preparing to ask for a Section 44 order to allow political parties to get down to business and begin selecting candidates. (Reuters file photo)

The Election Commission (EC) will ask the National Council for Peace and Order (NCPO) to lift the ban on political activities if Tuesday's meeting of the Constitutional Court backs an NCPO order on the political parties law.

The court will rule Tuesday on whether Order No.53/2017, issued by Prime Minister Prayut Chan-o-cha as the NCPO chief to amend the organic law on political parties, violates the constitution.

Under the order issued on Dec 22 last year, members of parties are required to produce letters confirming their membership and pay party fees by April 30 or lose their status.

The Office of the Ombudsman decided to seek a ruling on the order following petitions by the Democrat and Pheu Thai parties which argued it violates basic rights to party membership and creates unnecessary burdens.

EC secretary-general Jarungwit Phumma said Monday that the commission is awaiting the court's ruling on the matter as it will have a bearing on political parties' poll preparations.

If the court rules that the order does not violate the constitution, the EC will ask the NCPO to issue a Section 44 announcement to allow parties to resume activities such as holding meetings, setting up party branches and holding primaries.

This will give parties enough time to prepare for the poll expected in February next year, he said.

The EC will also ask the NCPO to authorise the poll agency to draw electoral boundaries without the need to wait for the bill on the election of MPs to come into effect, Pol Col Jarungwit said.

On May 30, the charter court ruled that the bill on the election of MPs did not violate the constitution. The next step is to submit the bill for royal endorsement, which can take up to 90 days.

After the bill is endorsed and published in the Royal Gazette it will take another 90 days to come into effect.

Pol Col Jarungwit explained that primaries can be held only after the EC finishes drawing electoral boundaries and the law regarding the election of MPs takes effect.

The primary vote system, a new element introduced in the organic law on political parties, has drawn heavy flak from parties which say it will cause a great deal of alarm.

Under the organic law which took effect on Oct 8, last year, political parties must organise primaries where members choose the candidates they want to stand in both constituency and party-list elections.

Parties are concerned that a primary vote is a time-consuming process that will prove costly and leave little time for them to prepare for the election.

However, Deputy Prime Minister Wissanu Krea-ngam said Monday there was no need to use any "special law" to draw electoral boundaries.

Mr Wissanu said that the EC already has the authority to do so. All it has to do is to ensure the electorate is evenly distributed across the constituencies.

Player the Premier League has admitted that he is gay anonymously. The letter was sent to the newspaper by the Foundation named after a football player who committed suicide after coming out
Messi has given 20 assists in La Liga. This is the best result of the tournament in 11 years
Chelsea lost by at least 3 goals in the Premier League for the first time in 11 months
Messi scored 20+20 points for the season in the League and repeated the achievement of Henri. In the XXI century, only they did it
Legia won the Polish championship for the 4th time in five years. It repeated the League record for titles (14)
Lazio has lost 3 matches in a row and can concede 2nd place in Serie A if Atalanta wins against Juve
A Parma employee has a coronavirus. The team is isolated on the base, but will continue to play in the championship
Source https://www.bangkokpost.com/news/politics/1478893/ec-poised-to-request-politics-ban-be-revoked

'Dozens' of US Marines on Okinawa have virus

61 US marines on Okinawa have virus