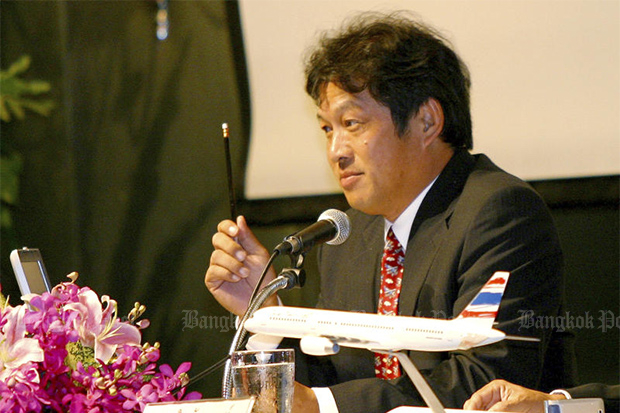 Udom Tantiprasongchai announced additional routes for Orient Thai Airlines on Aug 12, 2007. He died on Saturday at the age of 66. (Post Today photo)

Udom Tantiprasongchai, best known for his introduction of the first low-cost airline in Thailand, has died at 66.

Udom died on Saturday and the chanting rite for him will be held at Wat Depsirin from Sunday to Saturday at 6pm. The cremation will take place on Jan 24 at 5pm.

The cause of his death has not been officially announced.

"Thank you for your contribution to the Thai sky and Thai aviation industry," said a message posted on @aviaknowledge, a Twitter account created for the Thai aviation sector.

Udom started his business in Cambodia in 1994 with Cambodia International Airlines operating regular flights out of Phnom Penh to Phuket before expanding its wings to other destinations in the Southeast Asian region.

He launched Orient Thai Airlines in Thailand months after his Cambodian airline licences were revoked by the Cambodian government at the end of 1994.

He challenged domestic airlines in Thailand by introducing flights between key cities without passing through the hub at Don Mueang airport. The Orient Thai managing director foresaw growing travel demand from the North to the Northeast and South,.

Orient Thai later added Don Mueang to its destinations, but claimed the government was blocking its access to Thai airports to protect the business of Thai Airways International.

Udom moved one step further in 2012 by setting up Thailand's first no-frills carrier, One-Two-Go, as the goverment opened the skies to new competition, including from Malaysia's AirAsia.

One-Two-Go operated as an off-shoot of Orient Thai.

"We are prepared to go one step ahead of AirAsia and match its offerings both in terms of destinations and fares,'' the One-Two-Go chief executive officer said in an interview with the Bangkok Post that year.

One-Two-Go fought bitterly with other low-cost rivals accused of dumping air tickets but the real trouble came in 2012 when a flight from Don Mueang crashed while landing at Phuket airport, killing 90 people on board, most of them foreigners.

The McDonnell Douglas MD-82 jet veered off a runway in the heavy rain before hitting an earth embankment, breaking into two and bursting into flames.

Orient Thai ceased operations in 2018 after the Civil Aviation Authority of Thailand revoked its licence due to debt problems with other aviation agencies.

In September 2019, a Paris court sentenced him in absentia to four years in jail and fined him €75,000 (2.5 million baht at the time) over the Phuket crash following a suit filed by the families of nine French passengers on the flight.

Udom, who lived a low-profile life, never responded to the court and was not detained.

The final nail in the airline's coffin came on Jan 5 this year when the Royal Gazette published an announcement declaring Orient Thai bankrupt and ordering the Legal Execution Department to seize its remaining assets to pay its debtors.

Ole Gunnar Solskjaer: Manchester United don't get a penalty after a month or two ago there was a fuss about it. Coaches influence referees
Klopp on 2:0 Sheffield: Many have written off from the accounts of Liverpool. We need to win, we can't get to the Champions League without it
Milan scored their 15th penalty of the season in Serie A - the most in the league. Before the record-three 11-meter
Liverpool scored 7,000 th goal in the top division of England - only Everton has more
Manchester United have 0 wins and 1 goal in 7 matches against the big six this season in the Premier League
The Hudson-Odoi hand show: Maguire said the umpires were told it was a penalty. VAR baffled us
Jota misses the match with Sheffield due to illness, Alisson-due to the death of his father
Source https://www.bangkokpost.com/business/2052367/founder-of-first-low-cost-airline-in-thailand-dies