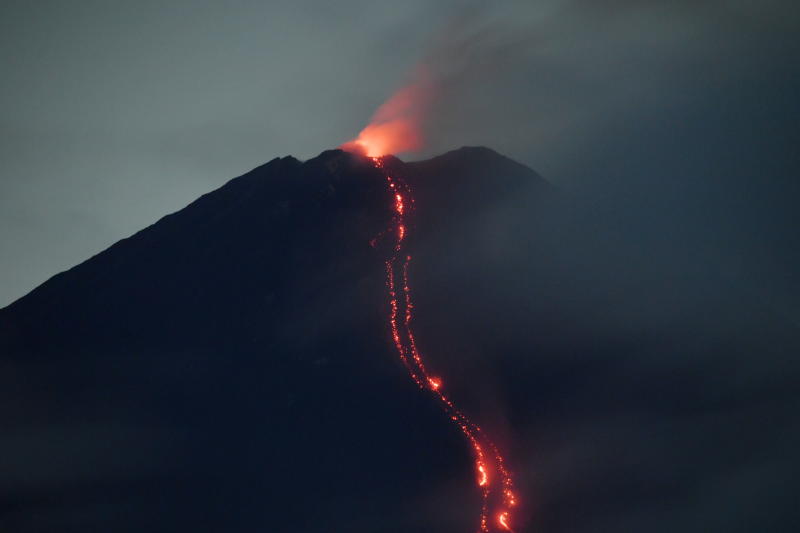 People shouldn’t carry out any activities within a radius of 1km from the crater, the country’s national disaster mitigation management in a statement on Saturday. The volcano alert level was at “watch,” two notches below the highest “warning” rating.

Indonesia’s 18,000 islands sit along the Pacific Ocean’s “ring of fire” zone of active volcanoes and tectonic faults, making it prone to natural disasters such as eruptions and earthquakes.

Indonesian authorities have had to deal with several natural and man-made disasters this month.

A 6.2 magnitude earthquake rocked West Sulawesi on Friday, killing dozens. Hundreds of people were injured and about 15,000 people were evacuated.

At least five people in Manado, North Sulawesi, died from floods and landslides due to adverse weather on Saturday. Last week, at least 11 people, including rescuers, were killed and 18 hurt in West Java, after torrential rain caused mudslides.

On Jan 9, Sriwijaya Air Flight 182 carrying 62 people plunged into the Java Sea shortly after take-off from Jakarta. No survivors have been found.

Ole Gunnar Solskjaer: Manchester United don't get a penalty after a month or two ago there was a fuss about it. Coaches influence referees
Klopp on 2:0 Sheffield: Many have written off from the accounts of Liverpool. We need to win, we can't get to the Champions League without it
Milan scored their 15th penalty of the season in Serie A - the most in the league. Before the record-three 11-meter
Liverpool scored 7,000 th goal in the top division of England - only Everton has more
Manchester United have 0 wins and 1 goal in 7 matches against the big six this season in the Premier League
The Hudson-Odoi hand show: Maguire said the umpires were told it was a penalty. VAR baffled us
Jota misses the match with Sheffield due to illness, Alisson-due to the death of his father
Source https://www.bangkokpost.com/world/2052355/indonesian-volcano-spews-ash