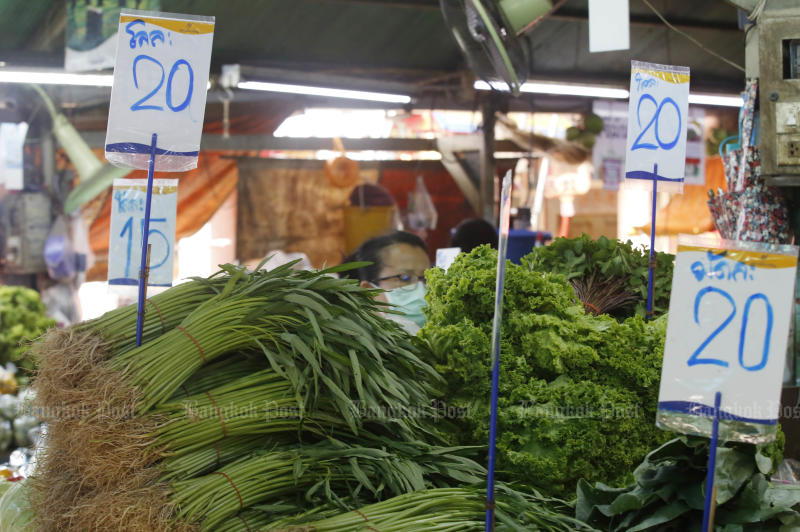 Policymakers are urging the government to promote vegetable consumption as a way of curbing deaths from non-communicable diseases (NCDs) and childhood obesity, the incidences of which are increasing in the country.

The move came amid revelations that the average Thai child consumes more than twice the recommended daily intake of sodium per day -- among the highest in the region, researchers said.

Speaking at the recent United Nations' Food Systems Summit Dialogue over Zoom, Renu Garg, a Medical Officer for the World Health Organization (Thailand), raised her concerns over the amount of sodium in an average Thai meal.

The current national nutritional guideline recommends around 600mg of sodium, equivalent to about one-tenth of a teaspoon of salt, per meal.

However, Dr Garg said common street food items such as som tum regularly contain up to 1,800mg of sodium.

Instant cup noodles contain around 1,935mg of sodium per serving, while tom yum goong may contain as much as 2,200mg of salt -- almost four times the recommended amount per serving.

"Eating too much salt is a problem, as it could lead to obesity, diabetes and hypertension -- and the trends are headed in the wrong direction," she said.

"Indeed, NCDs remain the top cause of death in Thailand each year, with as many as 400,000 deaths reported each year, which is equivalent to a death every minute."

On the other hand, she continued, the consumption of fruits and vegetables among Thais remain low.

The WHO recommends an adult to consume around 400g of fruits and vegetables each day, but the average Thai generally consumes less than 250g of greens a day, she said.

The promote a healthier diet among children and adolescents, Dr Garg said all concerned parties must work together to improve lunch offerings at schools nationwide.

One way, she said, is by increasing the serving of fruits and vegetables in school meals, before adding authorities should consider banning or restricting the sale of sugary drinks around school premises.

The government can also adopt stricter regulations on the marketing of unhealthy food and beverages, while at the same time ramping up campaigns to promote healthy diets to the public, she added.

Dr Garg said a combination of subsidies and taxes will encourage manufacturers to reconsider the amount of salt they put in their products, and perhaps incentivise them to incorporate more fruits and vegetables into their product.

Assistant CEO of the Thai Health Promotion Foundation (ThaiHealth), Pairoj Saonuam, said promoting the adequate consumption of fruits and vegetables is relevant to the nation's 13th economic and social development plan and, as such, should be placed higher on the national agenda.

"Food security is the foundation of human security and national security. Sufficient food will bring positive effects to health. Much research worldwide has also emphasised the importance of fruits and vegetables for out health, particularly in preventing NCDs," he said.

Spalletti on the leadership of Napoli: Expectations from us have increased, but there is something to add
Talalaev about 2:1 with Rostov: Akhmat's game needs to be improved. There were a lot of nerves at the end
Aroyan is the first Armenian to score in La Liga. The defender of Cadiz scored a goal in the game with Rayo
Ansu Fati returned to the Camp Nou like a king: he scored, shook the stadium, barely left the fans
Payet played the 600th match in his club career. He scored twice against Lance, but Marseille lost
Ansu Fati has not played for almost a year and promised his parents to score immediately. I went out for 10 minutes - and immediately scored
Maurizio Sarri: I didn't think that I would get so much adrenaline from the derby, and such satisfaction from the victory

More than 3,000 houses affected by severe flooding in Chaiyaphum