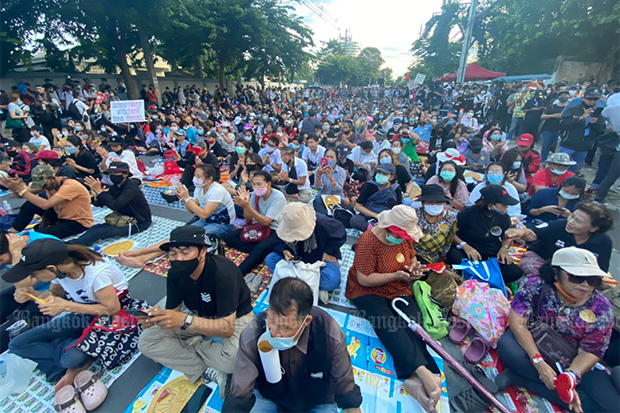 Protesters wait outside Parliament for the outcome of a vote on six charter amendment bills on Thursday. (Photo by Nutthawat Wichieanbut)

Parliament has delayed by a month the vote on six motions on charter amendments and to set up a tripartite panel as pressure mounted outside Parliament.

MPs and senators voted 431-255 to delay the vote and 432-255 to set up a committee at the joint sitting for the first reading on Thursday.

After the vote, Pheu Thai and Move Forward MPs walked out in protest and did not nominate anyone to the new 45-member committee.

Party leader Pita Limjaroenrat tweeted later his party did not agree with the setup of the panel to stall the process by several months. “We’re disappointed but let’s not lose hope. We’ll find another way to amend the charter.”

The remaining parilamentarians then went on to choose members of the new committee. Without nominees from the opposition, the committee consists of 31 — 15 senators and 27 MPs from coalition parties (8 from Palang Pracharath, three from Bhumjaithai and three from Democrat)

Around 1,000 protesters seeking a rewrite of the charter gathered outside, as MPs and senators debated whether to accept the bills for consideration.

The wildcards were the 250 junta-appointed senators, 84 votes of whom are needed for the bills to pass the first reading.

The protesters became anxious in the evening after the coalition proposed to the parliament president that the vote be delayed and a 45-member committee with members from the three sides — the coalitions parties, the opposition and senators — be set up to study the amendments.

They view the move as a stalling tactic and key protesters took turns speaking on stage about the role of senators.

Parliament went into recess after the meeting ended at 8.30pm on Thursday. If the bills are voted down in the next meeting session from November to February, Pheu Thai, the owner of five bills, must wait eight months before it can propose them again.

Klopp on 2:7 from Villa: the Players reacted as I expected. They struggled and won two games
Diego Maradona: Ronaldo and Messi are ahead of the rest. No one can do half of what they do
Bartomeu did not resign at a meeting of the Barca Board of Directors
Del Piero on the Juve-Barcelona match: Pirlo should play 4-2-4
Samuel Umtiti: The last two years have been the worst of my career. I ended up making a complete ass of
Putting together a dream team of the best players in history. Starting with goalkeepers!
Gian Piero Gasperini: Ajax has always been my reference point. Miranchuk is ready to play
Source https://www.bangkokpost.com/thailand/politics/1991059/parliament-delays-charter-vote-set-up-panel

Anon released, then held in another case