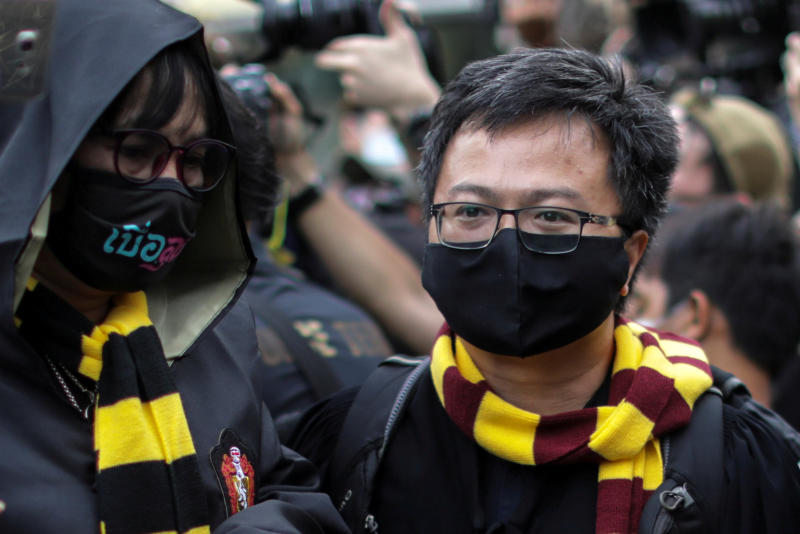 Police have summoned five organisers of student-led protests against the government, saying they had violated a coronavirus emergency decree that forbids large gatherings, a senior officer told Reuters on Wednesday.

Among those called for questioning was human rights lawyer Anon Nampa, who two days ago had demanded reforms of Thailand's powerful monarchy, a highly sensitive topic.

Police said, however, Mr Anon, 35, was being summoned over an earlier protest in July outside the army headquarters.

That demonstration was among a series of near-daily, student-led rallies around the country since mid-July that have demanded the resignation of Prime Minister Prayut Chan-o-cha and amendments to a military-drafted constitution they say maintains army influence over the political system.

"Anon and four others have been summoned for questioning and to hear the charge of breaching the emergency decree," Pol Lt Col Athich Donnanchai, deputy superintendent of Nanglerng police station, told Reuters.

Mr Anon was separately the subject of an official complaint on Wednesday that asked police to take action against him for breaches of the emergency decree and of the constitution, concerning his remarks about the monarchy.

Defaming the monarchy is punishable by up to 15 years in prison under Thailand's strict lese majeste law, which Mr Anon had also criticised.

Mr Anon did not immediately respond to a request for comment.

Police said they were looking into what took place at Monday's protest, where Mr Anon was a key speaker.

The government last month said the emergency decree in place since March would only be used as a measure against the coronavirus and from August onwards said it would not be used to prevent political rallies.

Six protest leaders or political activists in two different provinces were summoned last month for breaching the emergency decree, among other alleged offences.

In remarks at a military academy on Wednesday, army chief Apirat Kongsompong made no specific mention of the protests, but told military cadets they must be loyal to the nation.

"(Covid-19) is a curable disease, but hating the nation, hating one's own country, this a disease that is not curable," Gen Apirat said.

Aaron Ramsay: Under Pirlo, Juve players have more fun
Aubameyang on the decision to stay at Arsenal: Arteta is a key factor. He said: You can create a legacy here
You will get high from Rostov's goal as from your favorite song. Shomurodov from the fly in touch closed a crazy pass Normann 40 meters
Valery Karpin: Maccabi is a playing, pressing team. It is very dangerous to let her do everything
Barcelona will make one last attempt to sign Lautaro
Lingard's agents are in talks with clubs from England and Europe
Boateng said he dyed his hair purple because he lost an argument to a friend
Source https://www.bangkokpost.com/thailand/general/1963311/police-summon-protest-leaders-for-breaching-emergency-law