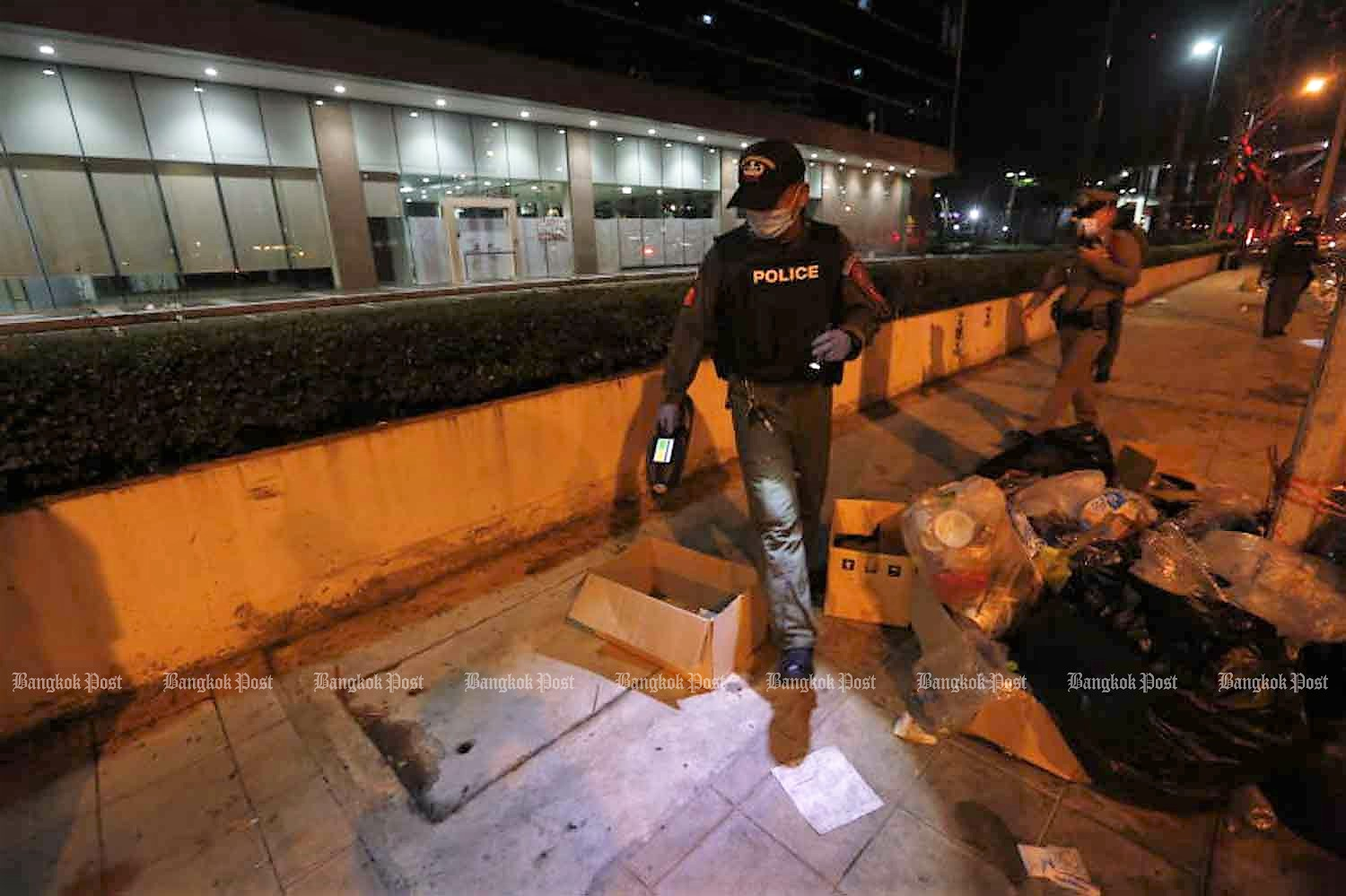 Police examine the protest site outside Siam Commercial Bank headquarters, across from the area where the shooting occurred, in Chatuchak district, Bangkok, after the rally ended on Wednesday night. (Photo: Arnun Chonmahatrakool)

The shooting heard after the protest at SCB Park ended on Wednesday night involved students from rival vocational schools who worked as guards during the rally, according to police.

Pol Maj Gen Piya Tawichai, deputy commissioner of the Metropolitan Police Bureau, said on Thursday the incident occurred after the rally ended outside the headquarters of Siam Commercial Bank (SCB).

Gunshots were heard and an explosion, possibly a firecracker, about 10pm.

The deputy commissioner said a young man with one group of vocational students fired shots at a group of rival students. One person was wounded, taken to Praram 9 Hospital and admitted to intensive care.

The students were from Minburi Technical College in Bangkok and Pathumthani Vocational Education College in Pathum Thani province.

The students had argued while working as rally guards on the SCB Park side of Ratchaphisek Road. Their dispute continued after the rally ended and they had crossed to the opposite side of the road, and the shooting occurred there.

"There are surveillance camera recordings and videos taken by reporters and other people who were in the area," Pol Maj Gen Piya said.

He warned organisers to ensure their rally guards were unarmed, otherwise any future quarrel could result in injury to innocent demonstrators.

Police later reported that two people had actually been injured during the shooting on Wednesday night.

The second was the gunman, who was given a sound kicking and later taken to Saint Louis Hospital.

On Thursday afternoon, Pol Maj Gen Jirapat Phumjit, deputy commissioner of the Metropolitan Police Bureau, identified the man who was shot as Wanchai Aree, and the gunman as Pasapong Kul-amornkan. Both were 25 years old and former students of the two vocational schools.

He said one group of rally guards first threw a ping pong bomb and fled. The other group chased them, and Wanchai fired a revolver. The clash resulted from a personal conflict and doctors had not allowed police to question the two men, he said.

Liverpool and PSG offered contracts to Alaba, but the player chose Real Madrid. He dreamed of playing for Madrid
I believe in Zlatan. Ibrahimovic asked about Milan's chances of winning the Scudetto
Man City have yet to offer Aguero and Fernandinho contract extensions
Frank Lampard: Chelsea do not have Hazard, who accounted for 50% of goals and assists, and Diego Costa with 30 goals for the season
Let See ten Mangalica and we win the Champions League. The Milan newcomer was a nightmare for Messi, quarreled with Pep and was a favorite of Allegri
Real Madrid can sign Aguero, Giroud or Milik after Jovic's departure
Chelsea spent the most in Europe on transfers in 2020. Manchester United - 2nd, Man City-3rd
Source https://www.bangkokpost.com/thailand/politics/2025891/rival-students-blamed-for-shooting-near-protest-rally-site