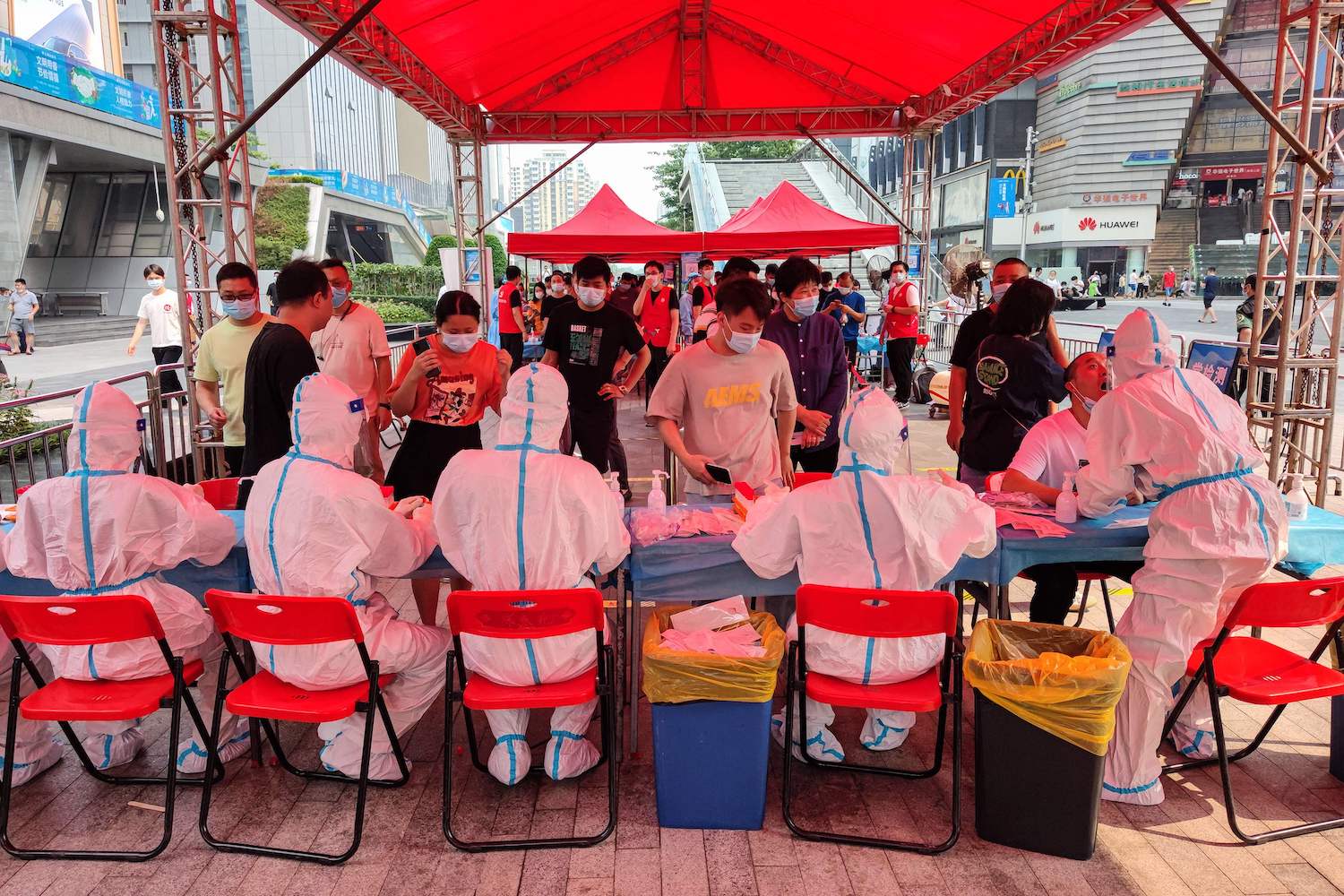 The airport in the southern Chinese megacity of Shenzhen cancelled hundreds of flights and tightened entry controls on Saturday after a restaurant employee tested positive for the Delta coronavirus variant.

Anyone entering the facility must show a negative virus test from the last 48 hours, Shenzhen Airport Group said in a statement.

Health officials in the city of 13 million said a 21-year-old waitress at Shenzhen Baoan International Airport had been infected with the Delta variant of the virus. She tested positive during a routine test for airport staff on Thursday.

Shenzhen, just across the border from Hong Kong, Hong Kong, is home to some of Asia’s biggest tech companies including the telecoms equipment maker Huawei and the gaming giant Tencent.

China on Friday reported 30 new coronavirus cases, including six local transmissions in the southern province of Guangdong where Shenzhen is located.

Nearly 400 flights to and from the airport were cancelled on Friday, data from the flight tracker VariFlight showed. Dozens of flights scheduled for Saturday morning were also dropped.

Passengers would receive refunds on their tickets without penalty, the airport authority said.

Millons of Shenzhen residents have been tested for the virus in recent weeks after a small outbreak at the city’s port earlier this month.

In other Covid news:

Indonesia will receive 50 million doses of Pfizer-BioNTech vaccines with the first batch expected in August, a senior health ministry official said on Saturday.

“Pfizer vaccines will start arriving from August, with shipments of between 7.5 million to 12 million doses per month,” said Siti Nadia Tarmizi, adding that the supply is the result of a direct government purchase.

The BioNTech Covid vaccine triggered “substantially higher” levels of antibodies than the Chinese-developed Sinovac jab, the South China Morning Post has reported, citing a study by the University of Hong Kong.

The results suggest some recipients of the Sinovac vaccine may need a third shot, the newspaper said, citing lead researcher Benjamin Cowling. The epidemiologist led a government-commissioned study that tracked antibody responses of 1,000 vaccinated people.

Cowling said the tests might fail to pick up small amounts of antibodies generated by the Sinovac jabs. He was commenting on a recommendation by the government’s scientific advisers to cut quarantine time for vaccinated travelers who test positive for antibodies but negative for the virus, the newspaper said.

The government of Singapore said more than half its population has received at least one Covid vaccine shot, the first Southeast Asian country to cross the milestone. No other country in the region is remotely close.

The update is some respite for the city-state after the government scaled back reopening plans amid dozens of new cases over the last week, even as some countries with similarly high rates of vaccination allow a resumption of social activities and freer travel. The government reported 14 new cases on Saturday.

Singapore’s portion of population with at least one jab is double that of Hong Kong, where the figure is 25%, according to Bloomberg-compiled data.

Singapore will be able to keep most businesses open, but a resumption in travel, and keeping food and beverage outlets and gyms operating would require the vaccination rate to go higher, Ong said.

“We are vaccinating as fast as we can but we are constrained by supplies, due to the high global demand,” he said.

The governor of Tokyo has announced that all mass public viewings of Olympic and Paralympic events would be cancelled as part of precautions against the coronavirus.

Yuriko Koike told reporters that some of the six venues planned to be used for screenings of events will instead be offered as Covid vaccination sites.

The announcement was made with just about one month to go until the opening of the Tokyo Olympics, with public concern about a potential spike in coronavirus cases driven by more contagious new variants remaining strong, while Japan’s vaccination rate is still low compared with many other developed countries.

The Japanese government has said it will allow up to 10,000 people at large events in the country, as long as they do not exceed 50 % of venue capacity, in areas that are not under a state of emergency.

Government and Olympic officials are considering applying the policy also to the Olympics.

The UK government is considering changes to quarantine rules, with Britons who have been double-vaccinated possibly being spared a 10-day period in isolation if they come into contact with a Covid carrier, according to The Times of London.

Instead, people who have been contacted under the test-and-trace system could opt to take a test each morning for a week, with each negative result giving them a 24-hour waiver from the legal requirement to self-isolate, the paper reported

Moscow on Saturday reported a pandemic high for new coronavirus cases for the second consecutive day, as the city’s hospitals are flooded with new patients due to the Delta variant.

The new wave of infections come as Saint Petersburg, the country’s worst Covid hotspot after Moscow, is slated to host seven Euro 2020 matches — including a quarter-final on July 2 — expected to draw thousands of European football fans.

Having claimed the worst of the pandemic had passed over winter, officials are now scurrying to reintroduce pandemic restrictions and roll out new beds dedicated to coronavirus patients after months of near-normal life.

On Monday, Saint Petersburg announced a tightening of restrictions including no food sales in its Euro 2020 fan zones.

Measures have been more drastic in Moscow, where Sobyanin on Friday shuttered the city’s fan zone, banned gatherings of more than 1,000, suspended all mass entertainment events and closed dance halls.

India hangs on to vaccines

“Once our immediate need of vaccinating a significant proportion of Indian people is achieved and vaccine stockpiles are visible from multiple sources, we would then like to play the role of serving others,” Paul said. India can expect at least 740 million doses between August and December, he said.

The world’s biggest producer of vaccines was sending jabs to over 90 countries in January, but curtailed the export programme by April after a virulent second wave made India the world’s worst hotspot. Paul declined to say when he thought exports may resume.

Last month, the Serum Institute of India, the world’s largest supplier of vaccines, said it may not be able to start delivering doses until the end of the year. 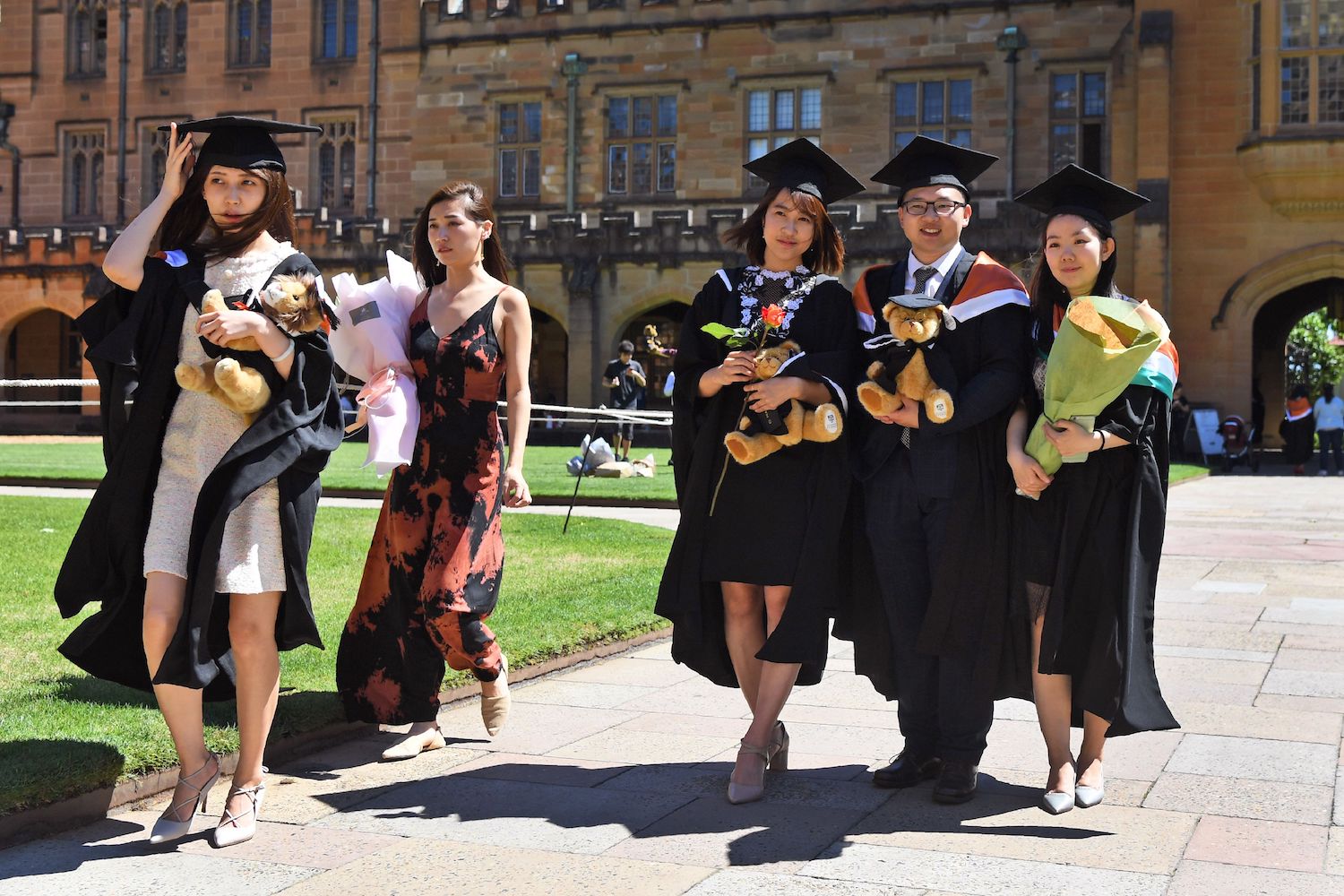 Students from China pose for family photos after graduating from Sydney University in October 2017. (AFP Photo)

Australia could open its international borders to foreign students before other visitors as a trial for travel bubbles the country is attempting to establish, The Australian newspaper said, citing an interview with Prime Minister Scott Morrison.

Mr Morrison told the newspaper the government is considering conducting early trials of a new recognition system for vaccinated arrivals on foreign students and has held initial talks with Singaporean Prime Minister Lee Hsien Loong on building a border clearance system that is compatible.

“Doing it (with) students would be a good first run-around to prove up the system,” he said. Other trials could be set up with regions including Singapore, Japan, and South Korea, the newspaper said.