Swiss voters refuse to rein in immigration from EU 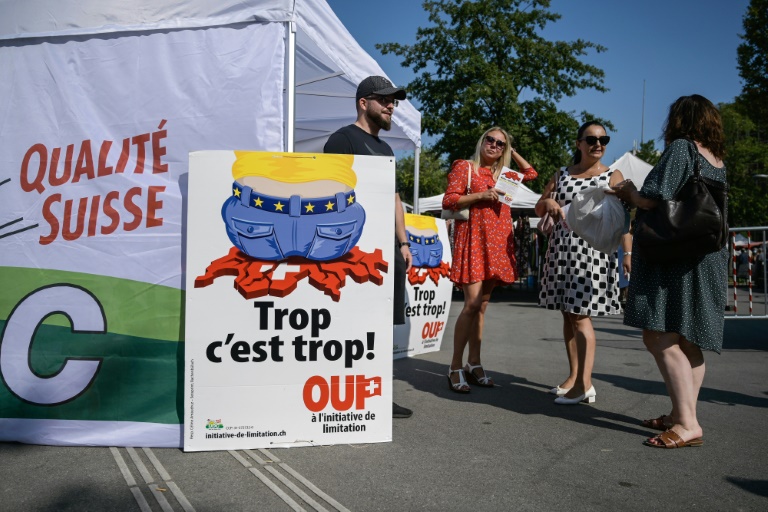 The right-wing Swiss People’s Party rolled out a campaign poster showing a jeans-clad behind with an EU-starred belt sitting heavily on a map of Switzerland, under the words: "Enough is enough!"

GENEVA: The Swiss have rejected a bid to dramatically reduce immigration from the EU, but have embraced offering paid paternity leave for the first time, projections from several votes in the country Sunday showed.

Shortly after polls closed at noon (1000 GMT), projections from gfs.bern polling institute indicated that 63 percent of Swiss voters had balked at the initiative to tear up an agreement permitting the free movement of people between Switzerland and the surrounding EU.

The initiative, backed by the populist right-wing Swiss People's Party (SVP) -- Switzerland's largest party -- had been opposed by the government, parliament, unions, employer organisations and all other political parties out of fear it would jeopardise overall relations with the bloc.

Public support for the initiative had also been seen slipping in recent opinion polls, but the suspense remained high since SVP has eked out surprise victories in the past in its war against tightening relations with the EU.

Most people vote in advance in the popular polls and referenda held in Switzerland every few months as part of the country's famous direct democratic system, usually making it possible to quickly surmise which way the vote is headed.

SVP's initiative called for Switzerland to revise its constitution to ensure it can autonomously handle immigration policy.

The party, which has built its brand by condemning immigration and EU influence, warned that the wealthy Alpine country was facing "uncontrolled and excessive immigration".

But the government had cautioned that if Switzerland unilaterally voided the free movement accord, a "guillotine" clause will come into force to freeze the entire package of deals with the EU, its largest trading partner.

SVP parliamentarian Celine Amaudruz said it was the mention of the guillotine clause that frightened people away from her party's initiative.

The European commissioner for the economy, Paolo Gentiloni, meanwhile hailed the projections, tweeting that it was "a beautiful democratic Sunday".

The EU had been following the vote with concern. A similar SVP initiative narrowly passed in 2014 threw Swiss-EU relations into disarray, and it has taken years to mend the damage.

A range of other issues were also on the ballot Sunday.

The expected large backing of introducing paid paternity leave is seen as a major change in Switzerland, which is considered quite traditional in terms of family models and gender roles, and still lags behind much of Europe when it comes to parental leave.

The country, which did not grant women the right to vote until 1971 and which first introduced 14 weeks paid maternity leave in 2005, will now offer new fathers the chance to take two weeks paid leave after the birth of a child.

"It took 20 years and more than 30 attempts in parliament to achieve this result," Swiss public broadcaster pointed out.

The Swiss parliament gave the green light for the two-weeks paternity leave last September, but SVP and other opponents had gathered enough signatures to put the issue to a referendum.

With Sunday's vote, paternity leave will like maternity leave in Switzerland offer the parent 80 percent of their salary, up to a ceiling of 196 Swiss francs per day.

Other issues on the ballot Sunday included referenda on dishing out six billion Swiss francs ($6.6 billion, 5.6 billion euros) for new fighter jets and on a revision of Switzerland's hunting law, to make it easier to take measures against the rapidly growing wolf population in the country.

The projections showed both of those votes were very close but tilting towards a "yes".

Juve are in talks with the sacked Sarri to terminate their contract. The coach received 5.5 million euros a year
Fonseca Pro 0:0 with CSKA Sofia: The quality of Roma's game in Serie A is different, but that's normal. Rotation is needed
Wolfsberg midfielder Lindl is among the contenders for the Europa League player of the week. He scored 3 goals for Feyenoord
Arteta after 3:0 with Dundalk: now it will be more difficult for me to choose the starting line-up for Arsenal
Cherchesov congratulated Maradona on his 60th birthday: Human happiness, Diego!
Milan - the first club to have 3 players born after January 1, 1999 scored in a Europa League/Champions League match
Zenith is necessary to protect the Semak. He can become as much of a legend as Semin is to Loco. Sabitov about the coach of St. Petersburg
Source https://www.bangkokpost.com/world/1992491/swiss-voters-refuse-to-rein-in-immigration-from-eu

Man arrested after allegedly slicing a man’s face with sickle