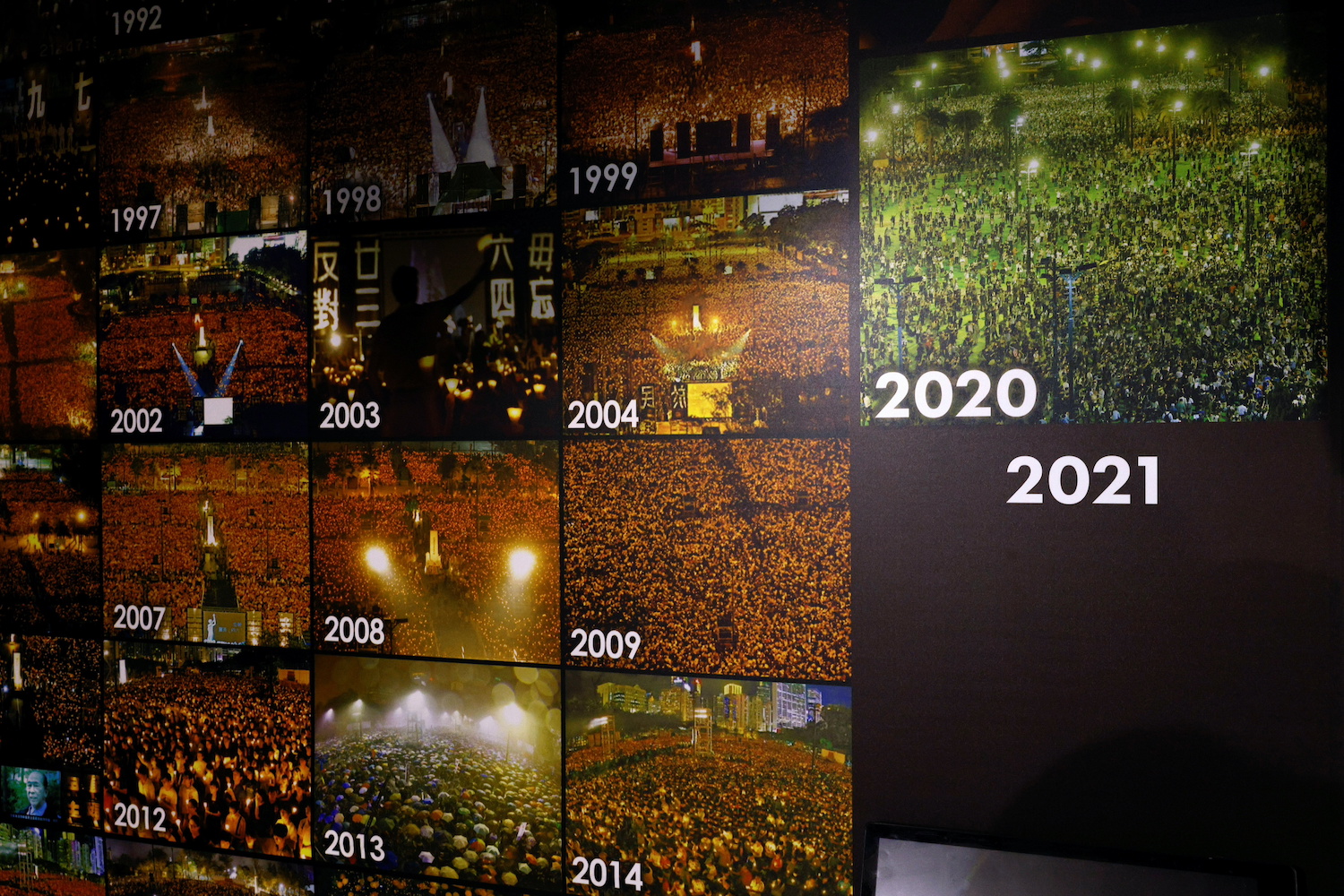 A display shows images of the crowds at the annual candlelight vigils held in Hong Kong to remember those who died during the military crackdown on the pro-democracy movement in Tiananmen Square in Beijing in 1989, at the June 4th Museum in Hong Kong. The commemoration was banned this year and while the physical museum has been closed, a website is still open. (Reuters Photo)

HONG KONG: The pro-democracy group that for three decades organised vigils in Hong Kong commemorating the victims of Beijing’s Tiananmen Square crackdown voted to disband on Saturday in the face of China’s sweeping crackdown on dissent.

The Hong Kong Alliance was one of the most prominent symbols of the city’s former political plurality and its dissolution is the latest illustration of how quickly China is remoulding the territory in its own authoritarian image.

After announcing the decision to disband, a representative of the alliance read out a letter from its chairman Lee Cheuk-yan, who is currently in jail.

“A regime cannot take away the people’s memory and conscience,” the letter read. “The beliefs of the Hong Kong Alliance will be passed on in the hearts of Hong Kongers.”

Many of the alliance’s leaders are in custody for taking part in the city’s democracy movement.

That same week, officers raided a shuttered museum that the group ran commemorating the deadly 1989 Tiananmen Square crackdown, hauling away exhibits, memorabilia and photographs of the historic event.

Police also ordered the group to take down its website and social media platforms and authorities vowed to revoke its registration as a company.

The alliance’s leadership was split on whether to disband.

“I still hope to show Hong Kong Alliance’s beliefs to the world and continue this movement that has already lasted for 32 years,” Chow Hang Tung, a barrister and one of the three leaders charged with subversion, wrote from prison earlier this week.

But other key figures, including Lee and Albert Ho, had signalled they supported dissolving the group.

Huge and often violent democracy protests engulfed Hong Kong in 2019. China responded by imposing a new national security law that has criminalised much dissent and launching a campaign to purge the city of people and groups deemed to be disloyal.

More than 90 people have been charged under the law, while dozens of civil society groups — including unions and political parties — have dissolved.

The alliance was told it was under investigation by the national security unit earlier this year and was ordered to hand over a host of documents and details on its membership.

Unlike many opposition groups that quickly folded or obeyed police requests, it took a more defiant approach. Many of its leading figures are lawyers and they argued the police request was illegal.

Once the alliance confirmed it was not going to cooperate with the investigation, police brought subversion charges against its leaders.

Officially titled the Hong Kong Alliance in Support of Patriotic Democratic Movements of China, the group was founded in May 1989 to support students holding democracy and anti-corruption rallies in Beijing.

A month later, China’s leaders sent tanks and soldiers to crush the movement in Tiananmen Square, a decision it has since heavily censored and removed from public record on the mainland.

Over the following decades, the alliance kept the memories of Tiananmen alive and called for China’s communist leaders to embrace reforms with slogans like “End one-party rule” and “Build a democratic China”.

Each June 4, the group organised candlelight vigils in Hong Kong’s Victoria Park that were routinely attended by tens of thousands of residents, the crowds swelling in recent years as anger over how Beijing was running the city intensified.

That anger exploded in seven months of democracy protests in 2019.

Beijing has since made clear it will no longer tolerate Tiananmen remembrance in Hong Kong or Macau, the only two places within China where public remembrance could take place.

China’s top official in Hong Kong recently described those who call for “ending the one-party dictatorship” as “real enemies”. Police action against the alliance then intensified.

The last two Tiananmen vigils were banned, with authorities citing the coronavirus pandemic and security fears.

Ceferin - Infantino about the World Cup every 2 years: The consequences can be terrifying. This is harmful for clubs and leagues, but they do not have the right to vote
Newcastle gives Dembele a salary of 15 million euros a year and a signing bonus of 15 million. Barcelona will not repeat this offer
Gianni Infantino: The enemies of football are not FIFA or the World Cup, but other youth activities. It is necessary to understand how to regain her Interest in the game
The last season when Barcelona did not get out of the group in the Champions League: a very strange coach, primal Rivaldo and crazy 3:3 with Milan
Valbuena about the intimate video: Benzema did not talk to me about money, but he was persistent. It was as if he wanted me to be afraid
Coulibaly on racism in the match with Fiorentina: I didn't sleep for two days. It would be nice to meet this guy
Few people humiliated Barcelona more. In 1997, Dynamo Kyiv took out the Catalans with a total score of 7:0

Myanmar's economic woes due to gross mismanagement since coup - US official