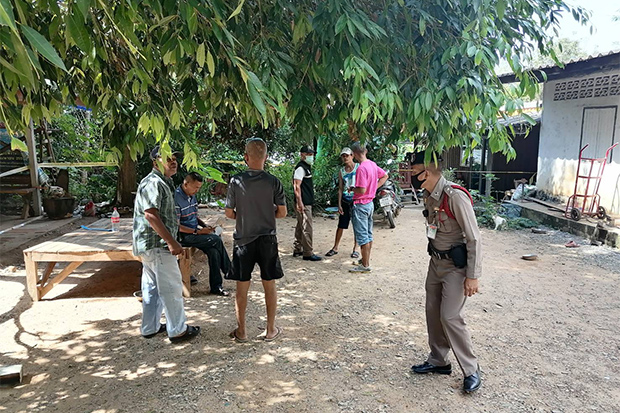 Police work at the house where Aree Narit killed her nephew Sommai Wuthisak, who wounded her husband in Chawang district of Nakhon Si Thammarat, on Saturday. (Photo by Nujaree Raekrun)

NAKHON SI THAMMARAT: A woman fired a shot that killed a man who attacked and wounded her husband with a knife in Chawang district of this southern province on Saturday, police said.

The woman, Aree Narit, 61, told police that the incident stemmed from a quarrel between her husband, Krachang, 64, and his nephew, Sommai Wuthisak, 43, who lived in a house about 30 metres away.

She said that after a heated argument, Sommai attacked and wounded Mr Krachang with a big knife. When she tried to stop him, Sommai instead charged at her with the knife. She then ran to grab a .22 pistol and when Sommai continued to attack her, she fired one shot that hit him in the chest, killing him on the spot.

The woman said she had to intervene, otherwise Sommai could have killed her husband.

Mr Krachang, her husband, was admitted to hospital for treatment.

An investigation of witnesses was underway. Mrs Aree was detained for further questioning pending legal action.

Gattuso on Granada: If Napoli were killing time like this, we would have been smeared in the press
Dzeko is Roma's top scorer in European competitions. He scored the 29th goal and beat Totti
Mikel Arteta: We got to give them two goals. Would hate to fly out of the Europa League
Milan kicked 18 penalties for the season. This is the best result in the top 5 leagues in Europe
Man City can offer Borussia more than 100 million pounds for Holand and Reina. The club is exploring this possibility (90min)
Ajax have won 11 matches in a row. The last defeat against Atalanta in December
Aubameyang pro 3-2 with Benfica: Arsenal showed character and deserved to win
Source https://www.bangkokpost.com/thailand/general/2052375/woman-shoots-dead-husbands-nephew-after-row