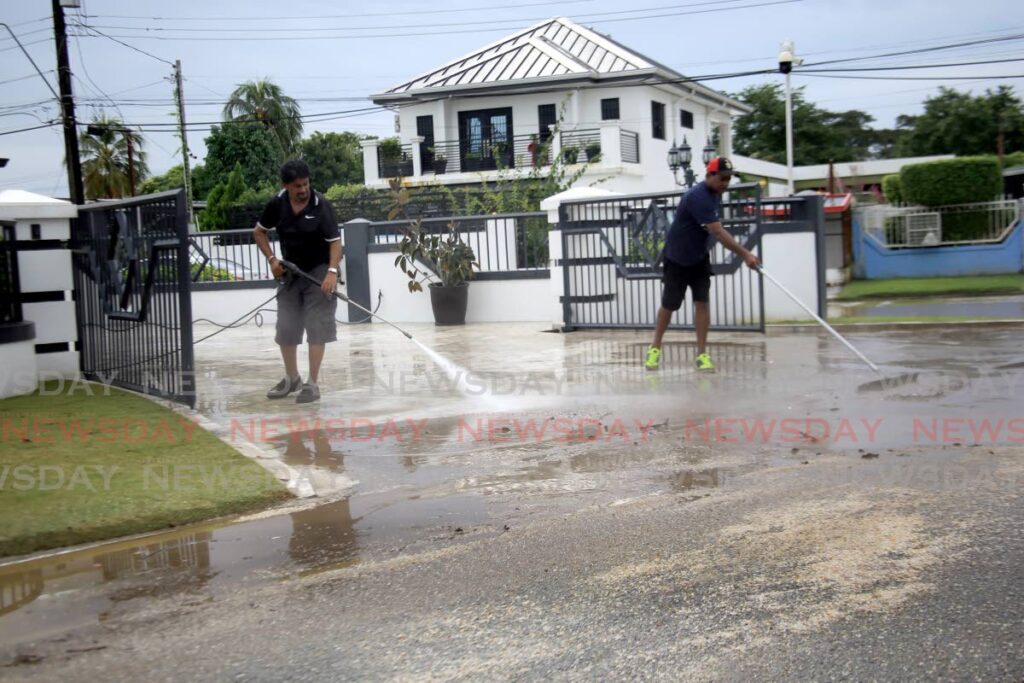 Residents of Mayfield Drive, Valsayn North clean up silt and debris after their community was hit by flash floods on Saturday. - Photo by Sureash Cholai

HEAVY overnight and morning showers on Saturday have inundated rural and suburban communities across the country with flash flooding, landslides, fallen utility poles and trees.

While the runoff was quick in some areas, thousands of people were confined to their homes, with many surrounded by impassable levels of water, while others have been unable to traverse out of their communities because of landslides and other blockages on minor and major roads.

At just after 3 pm on Saturday, the Meteorological Service issued a riverine flood alert – yellow, taking effect until Monday, unless revised.

It said accumulated rainfall has caused major river levels across Trinidad to be near or above 80 per cent, and smaller watercourses at "critical levels."

Periods of rainfall, the Met Service said, will likely continue over the next 24-36 hours, which will result in further elevation of the river levels.

"As a result, there is now a moderate risk to public safety (and) livelihood."

The Office of Disaster Preparedness and Management (ODPM) also issued a statement on Saturday afternoon, highlighting the dozens of areas where landslides and floods have been reported.

The south central region alone accounted for 18 of the entire 33 reported incidents of flooding across the country, with parts of Couva; Freeport; Caparo; Claxton Bay; Guaracara Road; Clalifornia; and Point Lisas among the worst affected.

In the north west region, there were landslides in Malick and Lady Young Road, the latter of which was closed to vehicles by the Ministry of Transport on Saturday.

Abattoir Road, located a short distance from City Gate, Port of Spain, has once again experienced near impassable flooding.

Meanwhile, residential flooding in the south west region has been reported in Penal; La Romaine; Debe; Lower Barrackpore; Barrackpore at Lalbeharry Trace; and Penal Rock Road. There was one reported landslide in Penal, at Railway Road, San Francique.

In eastern Trinidad and Tobago there were reports landslides, respectively, in Biche and Speyside.

The ODPM urged the public to "remain vigilant and to continue to take the necessary actions to preserve life and property."