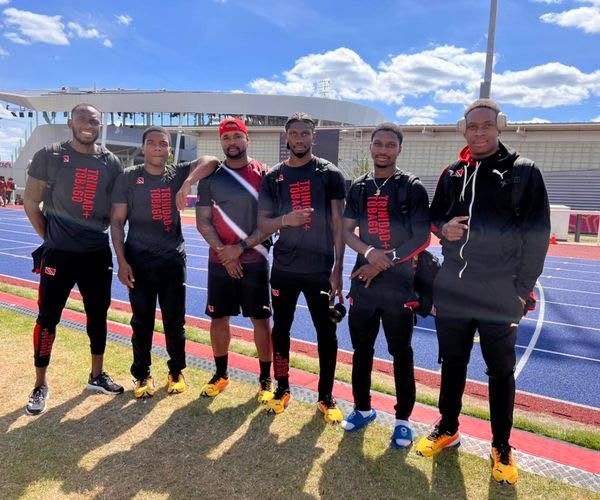 THE absence of Trinidad and Tobago sprinters Keston Bledman, Richard Thompson, Marc Burns, Emmanuel Callender and Aaron Armstrong on the world stage has certainly left a void in men’s sprinting.

Bledman, who served as TT’s coach at the 2022 Commonwealth Games in Birmingham, England, said the silver medal earned in the men’s 4x100-metre event is an indication that the future of track and field is bright.

The quartet of Jerod Elcock, Eric Harrison jnr, Kion Benjamin and Kyle Greaux finished second in a season’s best time of 38.70 seconds. England won in a time of 38.35 and Nigeria took bronze in 38.81.

Akanni Hislop was also part of the TT contingent, participated in the first round heat, which helped the team to seal a place in the final.

Bledman, who was elated to contribute to the success of the team in Birmingham, said the athletes and other coaches deserve credit.

“While I appreciate the respect and congratulations, I cannot take all the credit as these medals are a result of the hard work and efforts of the athletes on and off the track as well as the other coaching and support staff. I am definitely proud to be a part of the victories,” Bledman said.

Bledman was part of a fruitful period in TT sprinting. The TT men’s 4x100m relay team copped gold at the 2008 Beijing Olympics and silver at the 2012 London Olympics. Bledman’s relay teammates Thompson and Burns both competed in the men’s 100m final at the 2008 Olympics. Thompson snatched silver behind Jamaican Usain Bolt and Burns finished seventh.

Speaking about the performance of the men’s 4x100m team over the weekend, Bledman said the athletes have the quality.

“It was a great moment witnessing the team medal at a major championship games. It shows the potential TT has as we move forward.”

Prior to the Commonwealth Games, TT ended the 2022 World Athletics Championships in Eugene, Oregon, US without a medal.

Bledman said the effort shown by the Commonwealth Games athletes will serve as motivation.

“Every athlete competes to win and, while this did not happen at the recently concluded World Championships, our athletes came to the Commonwealth Games and performed well earning them a spot on the podium. The performances at these games will give the athletes a huge boost of confidence for the future.”

Paul and Richards were TT’s two standout athletes at the games. Richards ran a personal best on his way to the 200m title.

“Jereem is an extremely talented and hard working individual, so the sky is the limit for him as an athlete.”

Bledman said after being an athlete for so long it will help him in his new role as coach.

“While new to the coaching side of athletics, as a former athlete for the past decade and more I understand and know what an athlete wants from their coach so I am now able to provide that to the athletes.”

He said one of his challenges being a coach is keeping his athletes motivated.

“The most difficult aspect so far is mentoring an athlete after he or she did not perform as expected. However, this will become easier as I continue to collaborate and work with the athletes.”

Bledman did not necessarily plan to get into coaching immediately after retiring, but he is relishing the opportunity.

“Honestly, I did not know what my post career path looked like but I am thankful that God put things in place for me to transition naturally into my new role. I am truly enjoying it and look forward to greater things as a coach.”