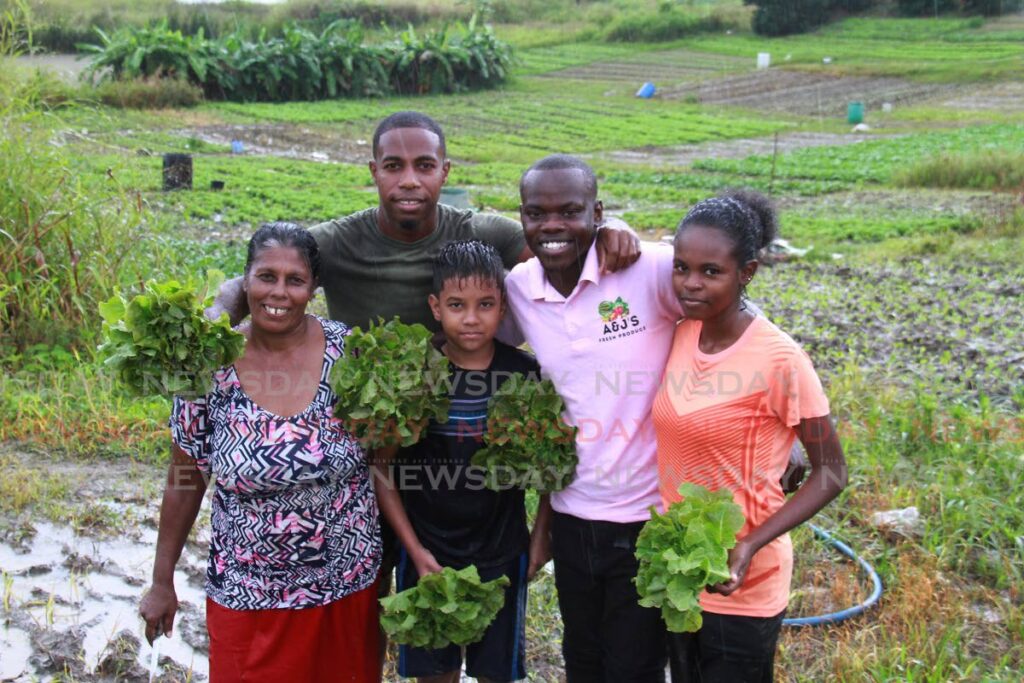 Curtis Carabai, second from left, owner of Carabai Fresh Produce, and Joshua Hercules, second from right, of A&J's Fresh Produce together with members of the community display lettuce from their farm in Mon Desir, South Oropouche. - MARVIN HAMILTON

Curtis Carabai first learned about agriculture from his grandfather St Clair Henry Roberts, who was a small-scale farmer, while he was growing up. With that knowledge he launched Carabai’s Fresh Produce. Carabai now produces vegetables for Food Basket’s south branches, Anand’s Low Price Supermarket, La Romaine, wholesalers at the Macoya Wholesale Market and other retailers.

Following the theme of healthy eating, he is also a nutritionist at the San Fernando General Hospital.

He explained his business model and how it benefits him and the community.

“What I do is more community-based farming, since I don’t believe in competition, only collaboration.

"So one thing we do is, we work together to help supply our demand, so for most of the farmers here, we connected the work. It’s like, if I don’t have my weekly order, I could go by one of the villagers' farms and he’ll help supply my order, and it works vice versa.”

He also began teaching young people in the Mon Desir, South Oropouche area about agriculture and helped them create their own businesses. Carabai started his own business six years ago, but his teaching programme started in June after a Young Leaders of the America Initiative fellowship programme in Colorado, US.

“Luckily, I was chosen to go and it was a fully-funded trip. I went to the state of Colorado and worked alongside some of the best large-scale farmers there. It was a three-week programme, and they equipped us with new knowledge, their style of agriculture – a more modernised style of agriculture, which we can’t practise here because of machinery.

"But basically strategically-wise, like how they will plan the farm and stuff – I think that I could implement back in my farm.”

That programme is an annual exchange scheme for 280 young business and social entrepreneurs from 37 countries across Latin America, the Caribbean and Canada, who are matched with businesses and organisations across the US.

“The farm I went to in Colorado is more wheat and grain farming, and it may sound impossible and unrealistic, but I want to implement grain farming down here, seeing as though we have no grain farmers.

"I believe in implementing new things where I’ll get government support.”

Carabai said he believes the government will take an interest in what he wants to offer, since it's new and can provide food security for wheat products. He said the government knows traditional farming works, since so many people are already doing it. But he has a gut feeling they’ll be eager to hear him out once he brings this idea to life.

“I want to start to at least do some trials here in Trinidad. Two people have already reached out to me and they are interested in the trial.”

Carabai said these trials will begin during the dry season, and when they are successful, he will take his results and the idea to the Ministry of Agriculture.

Aside from farming and producing for the wider population, Carabai teaches the young people of Dow Village about farming and even fishing.

He allows them to learns hands-on with his own garden, and teaches them what chemicals to use, how to take care of the plants, how to get the best-quality goods and gives sales and marketing advice. 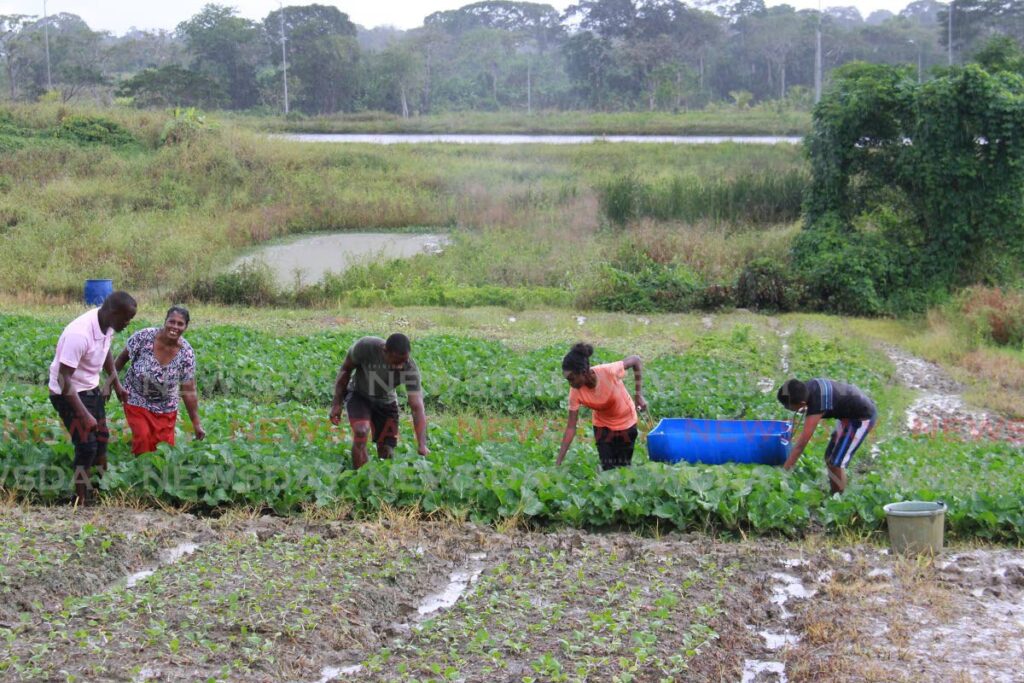 So far, he’s had one successful trainee, Joshua Hercules, who went on to open his own stall and create a sustainable business for himself. Hercules launched the popular A&J’s Fresh Produce stall that can be found at the front of the playpark in Corinth Hills, San Fernando.

Carabai said, “I realised that their (farmers in the US) style of agriculture is not just to provide, but to teach, since they believe in the generation to come.

"It's something that I've always been doing, I always use my farm as a hub to promote agriculture. But the drive really came from being a part of the training in the US to really implement programmes that could encourage youths in agriculture.”

Hercules, 23, met Carabai at the San Fernando General Hospital, where he also works as a nutritionist, and insisted Carabai teach him the ins and out of farming.

“Working with Curtis has been a blessing for me, because of his entrepreneurial (spirit). It kinda rubs off on you. He’s a person that you cannot be around and not be progressive also.

"When I met Curtis, I was interested in doing wholesaling and retailing, and he thought I was joking, so he didn't really take me seriously.”

But eventually Carabai gave him the chance to visit the farm and see what produce he was working on.

“He gave me the opportunity to come on the farm, and bit by bit he started teaching me how to buy and how to sell, and applying the trade to become more practical. So I started taking goods from him." Hercules would drive around selling produce from the trunk of his car, "And before I knew it, I started enjoying the business even more. Then he started helping me structure the business to become more profitable, but yet still being affordable – because one of the things that he does on his farm is, he creates affordability.”

Hercules explained that Carabai taught him perishables shouldn’t be unobtainable, so part of his training included not being unreasonable with the mark-up price.

“He streamlined my business in making me profitable, but yet still affordable in my community, which is in Corinth Hill. So after taking the green leafy veggies and stuff, I started tapping into the market of fruits, vegetables, dry goods and stuff and I would drive around different communities, to the point where I decided to open a market stall.”

Hercules’ business took off in 2020, after a video advertising his business – still done out of the trunk of his car at the time – became popular.

“I did a spontaneous video and it really picked up from there, because that is what gave me the capital to open a market stall.

"Now, I always wanted to open a stall, but I didn't have the capital needed to invest in it all at once. So when I did the video and the video went viral and people from all over the country came to buy from my stall, it didn't have a place in the country.

"So when I got that exposure, instead of running wild with the profits, I started streamlining the profits right into the vision I had from the start, which was owning a market stall.”

Carabai said for him, selling is never a problem, because he usually needs more markets just to get the produce off his hands. He added that when he was at the SATT award ceremony on November 19, he had a chance to speak to managers of Xtra Foods.

He'd spoken to sales managers there before, but with the produce he has now, he’s ready to take it more seriously. He added that along with the two acres of land he is using currently, there are three more at the back of his house to be used.

Hercules added that he had to incorporate other items for sale just to earn an income.

“It’s easier to buy a box of KFC than go and to buy a pound of tomatoes for $20 and you still need other ingredients to complete the meal. So at this junction, the business a little bit difficult. So what I've been doing is, I've been diversifying the business. Instead of doing dry goods and vegetables alone, I started going into soap powders, detergents, cases of water and stuff. These are things that will stand the test of time just to keep me afloat.”

He said in the past, he and his wife would have to use what they earned at the stall to fund supplies for the business.

“We would go weeks without benefiting personally from the business, just small basics. But we placed the money into buying tents, coverings and other things like that. When we first started the stall, we would supply to very small groceries as well. The only thing now is, because of the rain, the price to secure goods is a bit high, so we have consumers shopping less.”

Carabai is giving himself a three-year timeline to get all five acres of land into farming condition to grow his business further. He added that with extra resources, he’ll be able to achieve his dream of becoming the top supplier to groceries throughout Trinidad.

As for Hercules, his plans include using his business as a way of reaching out to areas like Corinth Hills to bring affordable fresh fruit and vegetables.

“When we look at the way our education system has taken a shift in the last seven years, where they are saying that they don’t want any more snacks. it’s because they’ve realised that the nutritive content in these snacks (is) not really doing anything for the kids.

"But when you look at it, the day-to-day struggle of a family to secure fruits and vegetables isn’t an easy task. So my goal is to set up more small shops in different areas and allow them to sustain the areas, while being affordable.”