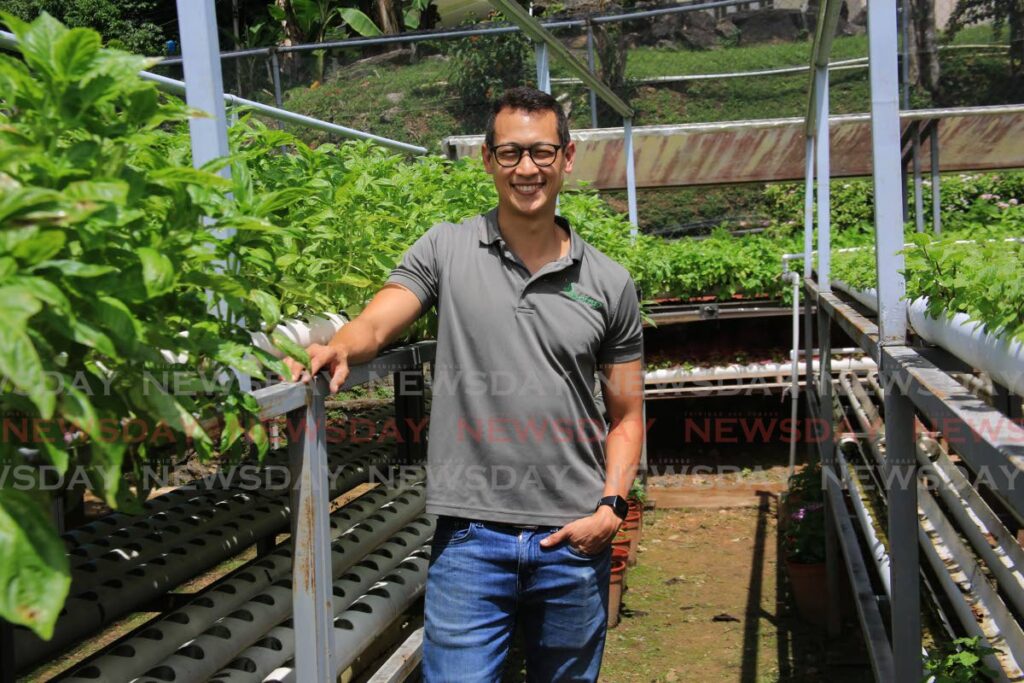 Christian Young Sing alongside basil and mint plant at his hydroponic facility in Cascade. - Photo by Sureash Cholai

The Young Sing family is known for the mass manufacturing of fixtures for every room of people's homes and have been in that business since 1973.

He has college diplomas in fisheries and aquaculture as well as business management completed at the Vancouver Island University, British Columbia and Conestoga College, Ontario, Canada, respectively.

He then ventured into food production and now provides restaurants and groceries with freshly grown, healthy and organic herbs. He sells his produce under the commercial name Crisp and offers herbs such as baby arugula, micro-greens, basil and mint.

Young Sing, 36, uses hydroponics to produce these herbs for mass production, but his company – Epilimnion Aquaculture Ltd in Cascade – was not launched to provide TT with these herbs. Before transforming his company to solely use the hydroponics system and produce herbs, he had a fish farm that used a re-circulating tank system to spawn tilapia.

After having consultations with the Institute of Marine Affairs on a feasibility study, he determined that a small aquaculture farm would not be successful.

"It was decided that there was more economic opportunity in the production of plant based crops than in the production of tilapia due to the limited demand in the local market for tilapia and the high capital and operational costs associated with running an aquaculture facility." 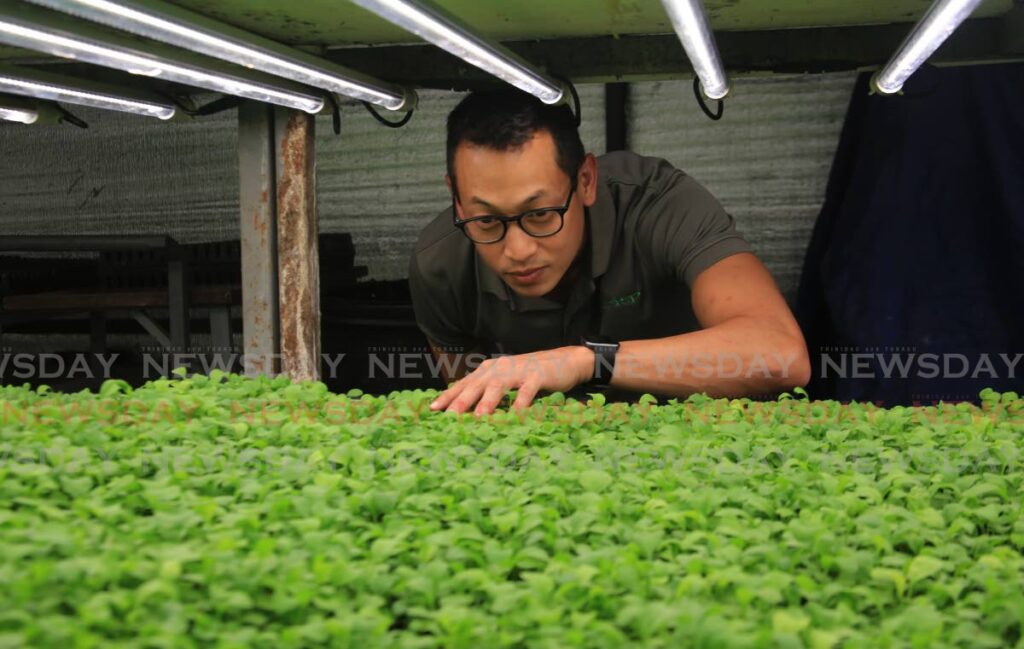 Young Sing kept the tilapia for a while and used their waste to fertilise plants, but this system was discarded six years ago due to a lack of space and the high cost to maintain it. Only in the last year was he able to build two climate control rooms to grow baby arugula and micro-greens.

The climate controls rooms are used to hydrate the plants with water that contains nutrients for the herbs. These rooms ensure the plants receive the required amount of care and so there is constant production. Upon entering the climate control room with baby arugula, the temperature is initially slightly cooler than outside, but after about ten minutes, the room becomes increasingly cold. The micro-greens climate control room though is left cold because they can only survive and flourish in a colder environment.

Both rooms are sealed off and the temperatures fluctuate between warm and cold with the help of timed heating, ventilation, air conditioning, dehumidification (HVAC-D) units. In addition to regulating the temperatures, the baby arugula and micro-greens are left under blue and red LED lights so the plants can photosynthesise throughout their life span.

"Our hydroponic systems are all re-circulating and reuse less than 95 per cent of system water as well as the condensate from the air removed by the HVAC-D units deployed in the controlled environment agriculture (CEA) modules."

As for the basil and mint, those can thrive under local weather conditions so Young Sing uses a PVC-assisted hydroponic system on the outside. The PVC pipes are placed on shelves with rows of four where the basil and mint springs up in all its glory. There were no dried or withered leaves on either of the basil or mints plants. Young Sing's aim with these herbs is to directly substitute imported items to help reduce the forex demand and subsequently, the food import bill. 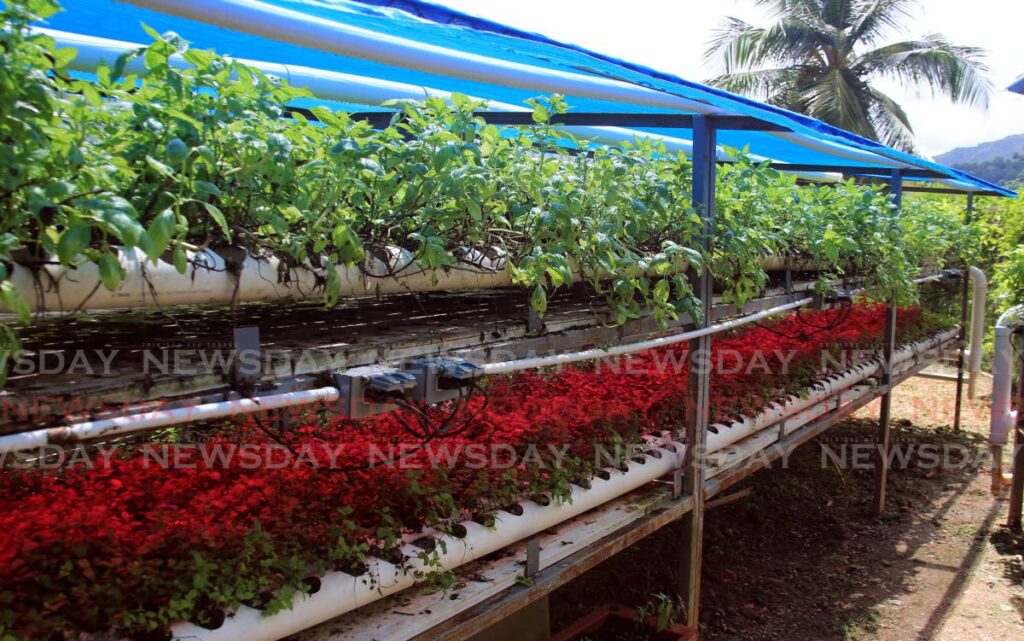 Red LED light is used on a row of basil at Epilimnion Aquaculture Ltd in Cascade. - Photo by Sureash Cholai

With his company celebrating ten years of existence, Young Sing saw the need to expand and so applied for an innovation challenge facility grant from the Ministry of Planning and Development's grant programme – Shaping the Future of Innovation. Epilimnion was one of 15 companies that received a grant during an awards ceremony at the Hyatt Regency, Port of Spain on July 21. The programme was launched in conjunction with the European Union and the Inter-American Development Bank (IDB) to help businesses in TT grow and prosper. The grants ranged between US$75,000 and US$500,000. Small to medium-sized enterprises are required contribute 15 per cent of the cost to their projects while large firms contribute 50 per cent.

Young Sing could not disclose the amount awarded to Epilimnion since contracts with the ministry have not been signed yet, but said he plans to use the money to fast track expansion of the facility. Upgrades of environmental controls for the herbs, equipment, monitoring and data logging to produce more and grow their market base will be financed with the allocation.

"I anticipate achieving the targets set out in the proposal. The fact that the expansion was already underway will be a huge advantage to executing the project as many of the supporting activities have already begun."

Epilimnion has made significant investments and achievements as one of the few companies to market micro greens in commercial volumes, developing the product line to cater to chefs to broaden their options for high-end plating. Young Sing said he encountered many problems at the start of his business which included funding, but also having to familiarise himself with new technology.

"Financing is always a challenge for small businesses, but through the Agricultural Development Bank I was able to access funding which was integral to the development of the business. Learning the technology was also a challenge in the beginning as I was transitioning from a knowledge base primarily focused on aquaculture, to one based on plants and plant biology," he said.

Young Sing now has to deal with issues that may result in the loss of income.

He said, "Now the challenges are mainly management of operational costs, capital expenditure to get the farm to maximum capacity and making sure the operations of the farm are maintained as agriculture is unforgiving due to the perishability of the outputs. Every mistake in the growing process costs money as it directly affects yield, so having the processes on the farm managed and planned out correctly is imperative to success." 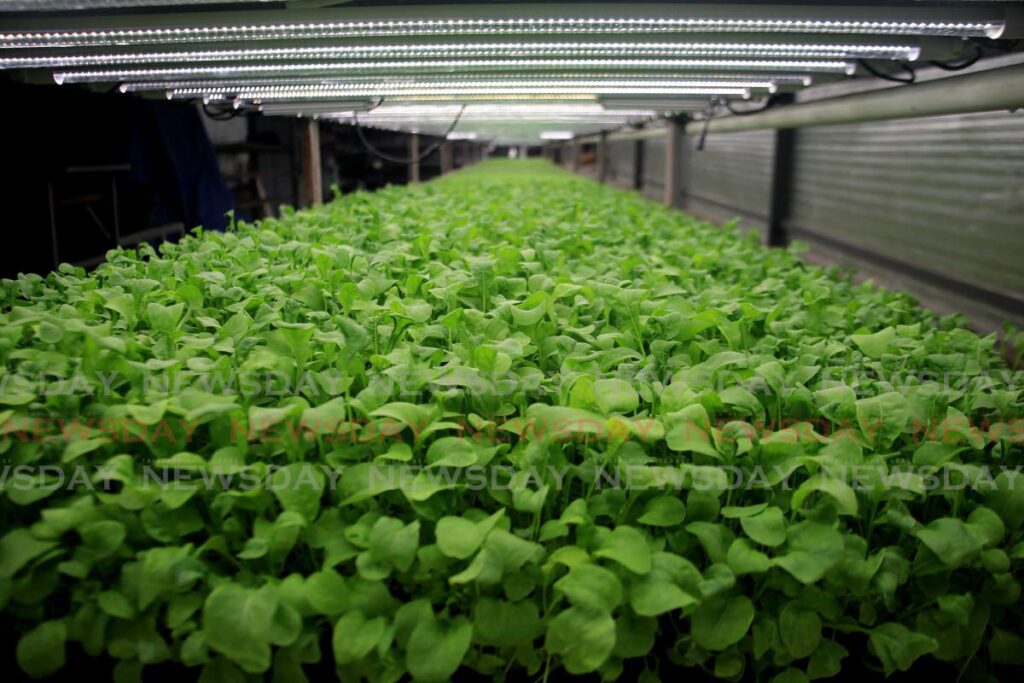 A bed of baby argula at Epilimnion Aquaculture Ltd in Cascade. - Photo by Sureash Cholai

"One recent issue that had to be dealt with was an upgraded connection from TTEC that was initiated in September 2021 and was not completed until July 2022. This is an example where doing business in Trinidad can be extremely inefficient and can have a negative impact on the development of the economy as a whole.

"It should be noted that there is a percentage of contribution that the company is obligated to meet to access the funding which is determined by the type of costs you have applied for."

While explaining about the grant received from the ministry, he said the application process was a rigorous one because of the many specific requirements the proposal needed before presenting it.

"There was a detailed concept proposal then a very thorough and detailed submission that included an implementation plan, itemised budget, investment evaluations, table of depreciation on purchases, project feasibility and business canvas model," he said.

"In addition to these submissions, there was a pitch to the evaluation committee and finally a question-and-answer segment from the heads of the respective organisations involved."