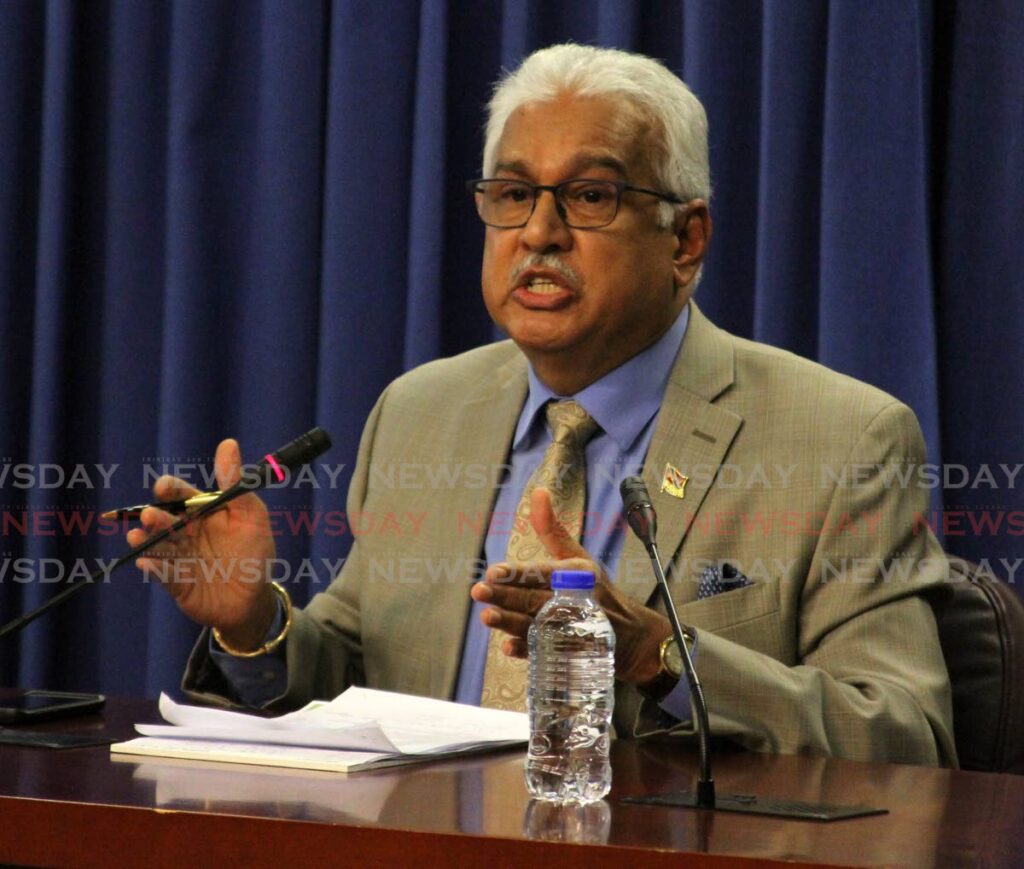 HEALTH Minister Terrence Deyalsingh defended his leadership of the country's efforts against the covid19 pandemic, in reply to criticism in an opposition's private members motion in the Senate on Tuesday. He began by chiding the opposition for moving that motion at a time that he'd have preferred to have been tending to his constituents amid current bad weather.

The minister said the pandemic had revealed the resilience of TT's healthcare system, as he hailed his ministry's technical team under chief medical officer Dr Roshan Parasram, ORTT.

Taunting the opposition, Deyalsingh alleged that whenever a health issue is to be debated in the Senate, an opposition senator falls ill, only for Dr Tim Gopeesingh to appear in his/her place as an acting senator. Replying to the Opposition's criticism of not having partnered the public sector with the private sector, Deyalsingh said the former had 1,000 beds and the latter 400.

Denying opposition claims of a shortage of PPE, he recalled a Caura Hospital nurse publicly saying her cousin who is a nurse in New York had wished to have the same PPE supplied in TT.

"There was never a shortage of ventilators," he said, "but this is the UNC."

Deyalsingh chided the motion's reference to inequalities, saying the word meant that only rich people could come in, as he mused,"Where did Senator Nakhid get that from?"

The minister read out several letters to the editor praising the healthcare offered at TT's public hospitals during the pandemic, including a man who had surgery at San Fernando General Hospital. The minister boasted of cutting maternal mortality, saving the lives of 12-15 women per year, and cumulatively of some 100 babies, as compared to affairs under the former government.

Deyalsingh hit the opposition for advocating the drug hydroxychloroquine against covid19, while The Lancet medical journal had disparaged it. In his response, temporary Opposition Senator Dr Tim Gopeesingh said the Opposition had merely asked if the government was aware the drug was a possible remedy.

Deyalsingh also scoffed at the opposition for saying sunlight could kill covid19. Gopeesingh shared five studies which said that sunlight killed the virus quicker than expected.

He blamed many of TT's covid19 fatalities on the high prevalence of non-communicable diseases in the population, saying 54 per cent of victims had diabetes which he said weakened the immune system, plus the vaccination rate of just 51 per cent. Deyalsingh said it was hard to compare case fatality rates between countries - the ratio of deaths to cases of infection. He explained that some countries test very widely among the population, resulting in many infections being detected but decreasing the overall case fatality rate ratio. More so, he said while some countries keep down their death number by counting only those deaths caused by covid19, TT also adds in individuals who had died "with" covid19 (to those who died "of" covid19.)

"The UNC took a calculated decision to work against the people of TT by bringing all these frivolous lawsuits."

Disputing Deyalsingh's statement that the UNC had sabotaged the government's vaccination efforts, Gopeesingh said he had advised the population to take the Sinopharm vaccine.

Gopeesingh criticised government's handling of the pandemic, citing the report prepared by the committee appointed to investigate the factors contributing to clinical outcomes of covid-19 patients in TT.

"Staff shortages were common at every level. Junior doctors were taken in straight from internships, and had to sleep on matresses on the floor. The staff complained of an inability to get meals, severe undersatffing, long hours in personal protective equipment, and extreme mental stress.

"The minister only wanted to use PCR tests so he had patients suffering under tents for six days, rather than using available antigen tests."

Gopeesing joined with his colleague Senator David Nakhid in calling for a commission of enquiry into government's management of the pandemic.