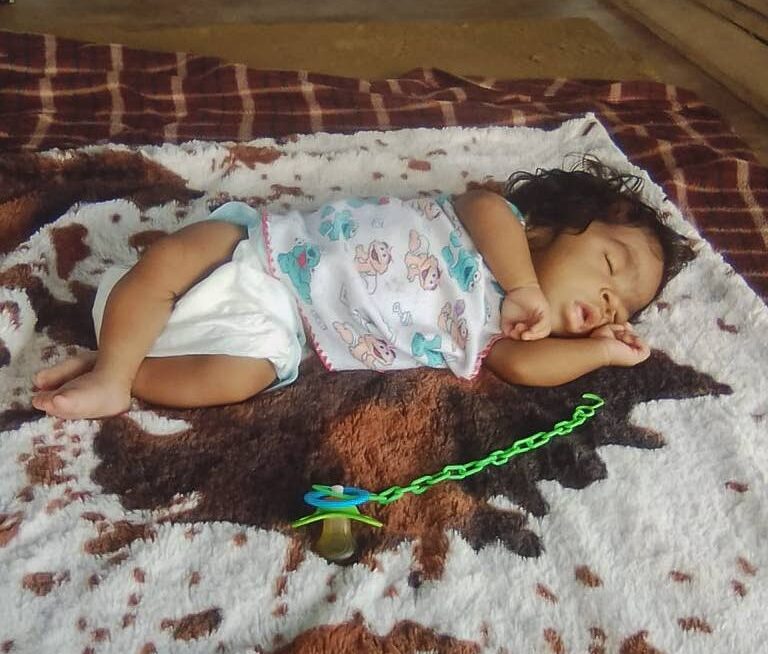 HOURS before baby Selieen Ramsaroop's final farewell, her paternal relatives are speaking out, denying she was abandoned by her father Sunil Ramlal, as other relatives have said.

The baby, who was reportedly poisoned by a female relative, is to be laid to rest at 1 pm today. A service is to be held at Boodoo's Funeral Chapel, Penal, after which she will be interred at the Batchyia Cemetery, Penal.

Selieen's father claimed her body and has made the funeral arrangements, said one of his aunts, a businesswoman who was only willing to give her name as Savi.

Savi said her nephew was always present in Salieen’s life from birth until three weeks before her death.

“My nephew (Ramlal) is not a person who like media or social media. He is being accused of all kinds of things, I don’t want to be biased, but they are not true.

"He took care of his children. He went to the San Fernando General Hospital (SFGH) to pick them up, but she was gone when he got there.”

She did not know why the baby was taken to her maternal grandparents' home at New Grant after leaving the SFGH three weeks ago.

She said Selieen was always a healthy and happy child. She didn’t know whether her mother was suffering from depression.

Savi said the family heard and read reports of a child dying after being fed poison, but did not know her identity until the following day.

“All of this is causing this family more grief. Sunil would have wanted to be there when his daughter took her last breath. Maybe he could not have saved her, but he could have lifted her fingers, lifted her foot, touched her. He would have been with her in her last moments.

“He was a good father. He loved his daughter.”

In the aftermath of the child’s death and the police detention of a close female relative, Savi said she was worried about the future of Selieen’s two older brothers, who were living with their father.

The baby also had another brother, ten, who lives with her grandparents at New Grant.

“I am looking at these two innocent children and I am worried about their future. I look at my nephew and see a single father.

“Anywhere you saw him, the woman (Selieen’s female relative) was always with him. They were inseparable. I don’t know how he will live now...It is really a difficult time for us."

The aunt said she was one of the perople who identified the baby’s body at the Forensic Science Centre: "And when it hit me – this lifeless body was that of my (great) niece, who was leaving this life before getting a chance to live it – it is painful.”

Savi disputed reports that Selieen had tested positive for covid19, saying there was no mention of the ailment on the autopsy report.

The report, by forensic pathologist Dr at Dr Somu Gajula, gave the cause of death as pulmonary oedema, pending a toxicology report. Pulmonary oedema is a condition caused by too much fluid in the lungs, which makes breathing difficult.

Savi said some people has called the family to say they would not be at Thursday’s funeral because they were afraid of contracting the disease.

Selieen’s maternal stepgrandmother Sharmela Deonarine insisted a covid test done on the baby at the Princes Town District facility, where she was treated on September 21, came back positive.

Savi asked why, if the baby tested positive, her maternal relatives were not quarantined. She said this information was not conveyed to the funeral home, either.

Homicide Region III, which is investigating the baby’s death, has sent a file to the office of the Director of Public Prosecution for advice on the detention of a 30-year-old mother of four, before any charges can be laid.