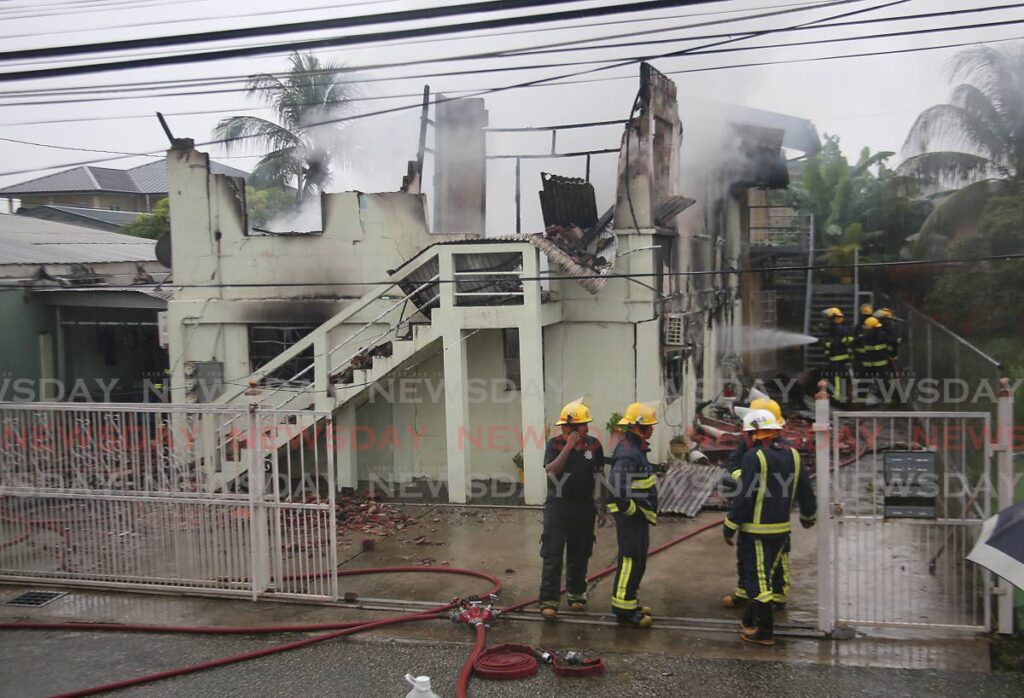 Firefighters at the scene of a house fire on Prescott Lane, Tunapuna in which 88-year-old Zobida Mohammed died. - Photo by Sureash Cholai

AN exploding gas tank was thought to have caused the blaze at a block of rental rooms in Tunapuna on Sunday that killed a woman identified by police sources as 88 year old Zubida Mohammed. The house at Prescott Lane next to the Priority Bus Route and near Royal Castle, Tunapuna, was reduced to a smouldering ruin of scorched walls, twisted galvanise roof sheets and scattered clay blocks.

About 20 displaced tenants stood uncertainly under a galvanise-covered structure next door, sheltered from a constant drizzle of rain as acrid smoke continued to rise from the ruined house.

Minutes before, Mohammed's body had been taken away in a hearse under police escort, even as an ambulance remained for a few minutes at the site before also leaving.

A senior fire officer, Mr Alleyne, told Newsday, "We had a fire at this house this morning. There was a fatality at the house. We recovered the body after we extinguished the fire. The undertakers just came and took the body after the DMO (district medical officer) pronounced the person dead."

With the flames doused, fire officers inspected the site as TTEC officers temporarily locked off the electricity supply to the premises (including an officer in a mechanised bucket being lifted high to overhead power lines) so as to let the fire officers work in safety, TTEC acting supervisor Brandon Harricharan told Newsday.

Tenants were too distraught to talk to Newsday, a man who knew them well told Newsday. "They're not really in a condition to talk to you right now."

Among the group of tenants sheltering, a young man told Newsday one person had died, but he did not want to talk too much.

However one woman tenant, Giselle Kallicharan, recounted her recollection of the fateful morning. She said she had been smelling gas since Saturday night and she blamed a gas leak for an explosion and subsequent fire that led to the death of Mohammed whom she said lived there alone.

She said she had heard an explosion in the victim's room, located at the front and ground level floor of the building. The explosion and fire happened just before 9 am, she recounted.

"I'm saying it was a gas leak because I am smelling the gas last night."

"I don't know if she went to light her stove and just burned."

She said a big blaze had broken out very rapidly.

"The lady was just bawling.

"She was bawling but I couldn't help her."

Newsday spoke to a fire inspection officer on the site who had referred us to a colleague at fire headquarters in Port of Spain but up to press time we had been unable to get any information from that anyone in the inspection unit.