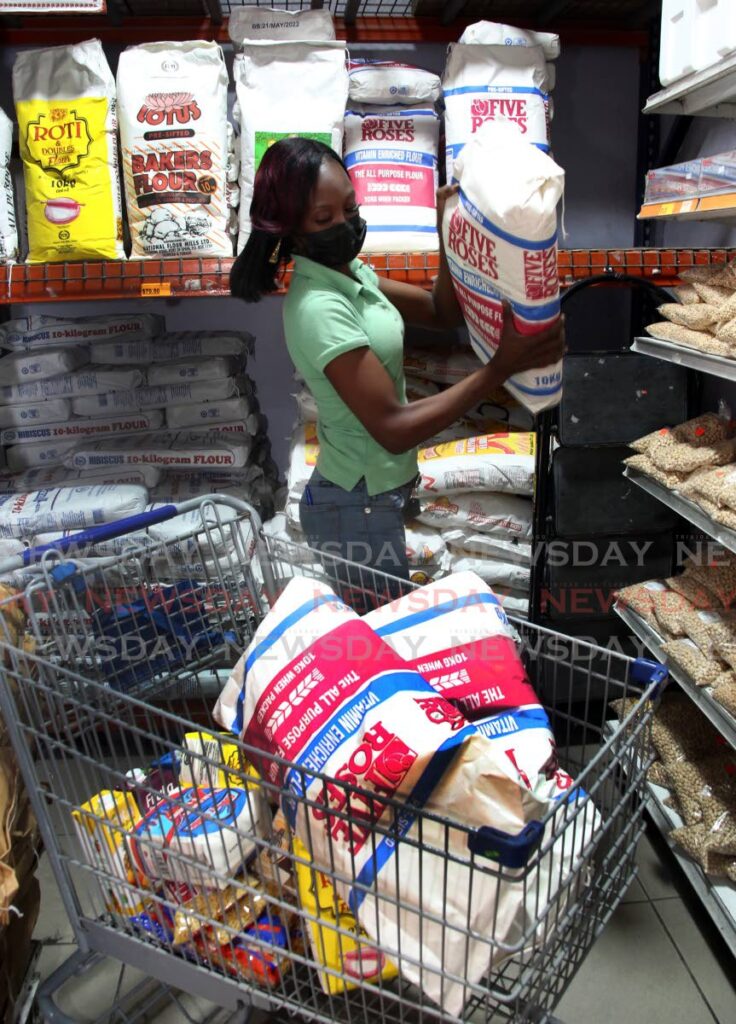 Antoniana Clarke stocks up on flour at Better Deal Supermarket, Aranguez. The prospects of Guyana wheat and soya production can be a solution to regional food security. - SUREASH CHOLAI

Trade and Industry Minister Paula Gopee-Scoon said the memorandum of understanding (MOU) between Trinidad and Tobago and Guyana for renewed and enhanced co-operation will provide a sustainable solution to issues of food prices, security and availability.

She made the statement after the signing of another MOU between the Ministry of Tourism and the Royal Caribbean at the Trinidad Hilton, Port of Spain on Monday.

“The major concern is prices, but what is also becoming more intriguing is the issue of availability,” Gopee-Scoon said.

She described the signing of the MOU between Guyana and TT as “fortuitous” because an enhanced relationship between the two countries in the area of agriculture could provide the inputs to produce basic food items at a price that could be better controlled.

“Guyana has a vast land mass and therefore countries like Guyana and Belize can produce these items (wheat). Once we get the production of these basic items going there will be no concerns over availability. Then, of course the price could be settled within the region.”

“If we get into growing soya bean then that means that you are going to be able to supply soya bean oil. After that there will be the mash which is an input in the production of animal feed. All round, it is going to benefit. These are the kind of sustainable initiatives.”

She said outside of these initiatives, there is very little that can be done on a policy level to control the prices or offset any price increases.

“We have already taken off value-added tax (VAT) and suspended the common external tariff (CET). We are having discussions with NFM and we are concerned about the pricing, but it is the consumer that we are most concerned about. What we are looking at it actual production. That is where we will be able to have more control over price and availability.”

Last week, Agricultural Society president Darryl Rampersad told Newsday price increases in products that come out of grains like flour and feed were impending because of worldwide shocks such as India's ban on the export of wheat.

He said although TT does not buy directly from India, the country could still be affected by the lack of availability as it gets its wheat from a third-party dealer.

The World Bank said in its commodity markets outlook report in April that the war in Ukraine has sent shockwaves through worldwide markets, significantly altering global trade, production and consumption patterns that would keep prices historically high through the end of 2024.

The World Bank said agriculture and meals are expected to increase over 20 per cent in 2022.

On May 14, India, the world’s second largest wheat producer, announced a ban on its exports. The government said it chose to protect food security for its population which is about 1.4 billion. India also announced on Wednesday that it will limit its sugar exports to 10 million tonnes for the marketing season that runs through September. The Narendra Modi government said it took the decision to maintain stocks in India after a large growth in exports last year and during the current financial year, from October last year to September.

India is the largest producer of sugar in the world and the second largest exporter behind Brazil.

Sugar mills in India have signed contracts for about nine million tonnes, so far, for the current financial year. Over the last year, India shipped over seven million tonnes of sugar overseas.

After a three-day agriculture forum and expo in Guyana, both the TT and Guyana governments signed the MOU which seeks to address partnerships in trade and investment, including non-tariff barriers, agriculture and food security, energy, infrastructure, education, tourism, sports and culture.