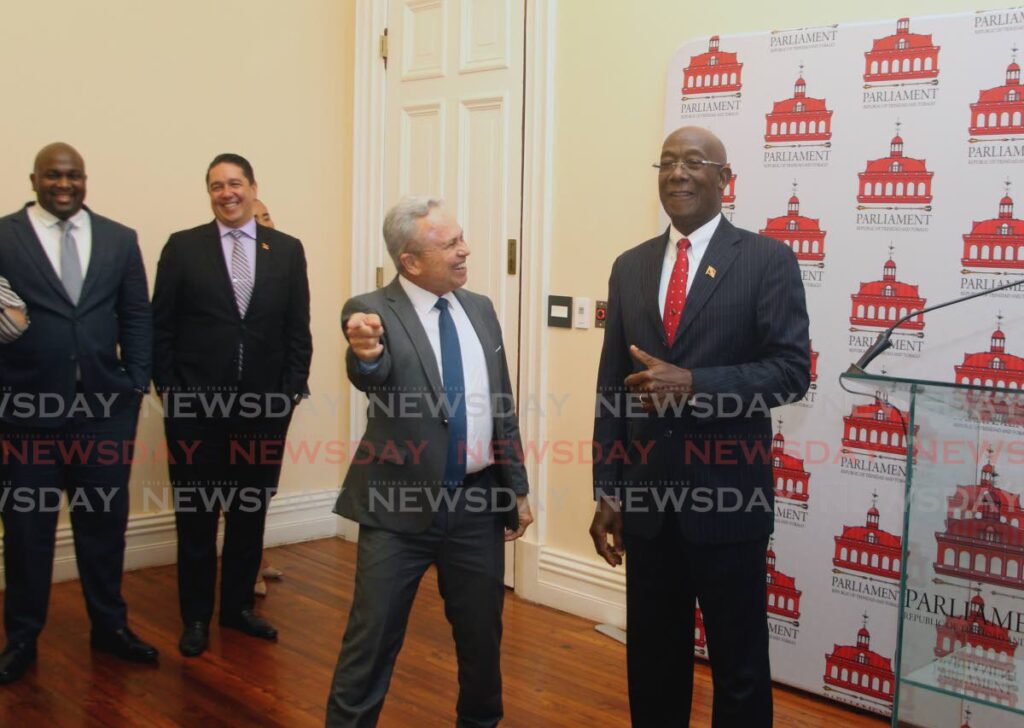 PAY your portion, Finance Minister Colm Imbert intimated to the people during his 2023 budget delivered on Monday in the House of Representatives.

In what could be described as a give and take budget, the giving side of Imbert saw help for the vulnerable in society, help for young people and help for SMEs (small and medium enterprises) recovering from the pandemic. Tobago got $3 billion in benefits, direct ($2.521 billion) and indirect. There was a $210m gratuity for health workers.

He said TT is in a state of fiscal deficit and debt-servicing with no great surplus in revenue.

The taking side of the minister saw drivers face an immediate increase in the price of fuel at the pump – the sixth in the past seven years (and second this year) – the elderly no longer travel for free on the inter-island ferry and higher fares to travel to and from Tobago on the airbridge.

Labour leaders and the country's public servants were told flatly there would be no increase in the four per cent salary increase offer. The country, Imbert said, simply cannot afford any higher offer.

With the increase in the price of fuel, everyone rich or poor, can expect a consequent rise in items and services which depend on transportation – including food. Those approaching retirement soon are likely to have to work until 65.

He said TT's finances were improving – with US$4 billion balance of payments, US$6.8 billion in reserves and debt-to-GDP at 70 per cent .

Imbert announced $210 million for gratuities to 20,000 "exemplary and heroic" healthcare workers for their pandemic service. He said people earning $7,500 or less per month, would pay no income tax.

Youngsters at tertiary level who have already accessed GATE for diplomas, associate degrees or N1 exams may now do full degree/tech voc training, with $50 million in extra going towards GATE.

He promised a 150 per cent tax break to any company taking on youngsters as apprentices, and mooted a national service programme and six youth development centres.

"To incentivise further and create a more agile and robust manufacturing sector, I propose to introduce a one-time manufacturing tax credit for companies which make an investment in new machinery, production lines and equipment." This would be a tax credit of up to $50,000, costing the government about $50 million.

For oil/gas firms he increased the investment tax credit from 25 to 30 per cent, and cut supplemental petroleum tax (SPT) for operators in shallow waters.

"We believe that these reduced rates of SPT for new oil production in the marine areas will allow companies to access the required financing to increase their drilling and get approval for new exploration and production programmes thus increasing the production of much needed oil."

He offered $50 million in tax-breaks for deep-water exploration, cutting the Petroleum Profits Tax from 35 to 30 percent.

He offered another tax amnesty to businesses on penalties/interest on taxes owed up December 31, 2021, hoping to earn $300-500 million.

Imbert envisioned, "We are anticipating increasing levels of revenue from the implementation of the property and gaming taxes and the new revenue authority.

"At the same time, we are screening and rationalising public expenditure while reshaping the structure of Government expenditure to target social, educational, and health-care programmes."

Sticking to the CPO's four per cent wage offer for 2014-2019, he said even that would be difficult for the Government to afford in terms of back pay plus annual extra expenditure, while saying the PSA's counter offer of a 19 per cent increase was totally unrealistic as this would lead to $30 billion in back pay and $3.3 billion extra in recurrent expenses annually.

Imbert provoked some groans from opposition MP by announcing pensioners would no longer enjoy free ferry travel but have to pay $25 for a one-way trip to Tobago.

Lamenting the Government's $1.9 billion annual fuel subsidy, he proposed to add $1 to three types of fuel, and 50 cents to diesel per litre.

He said a 20lb cylinder of cooking gas will still cost $21, at an annual government subsidy of $300 million.

Imbert announced his intention to restrict ownership of assault rifles which meanwhile will attract a $5,000 licence fee, even as he promised to double to the standard firearm user licence fee,