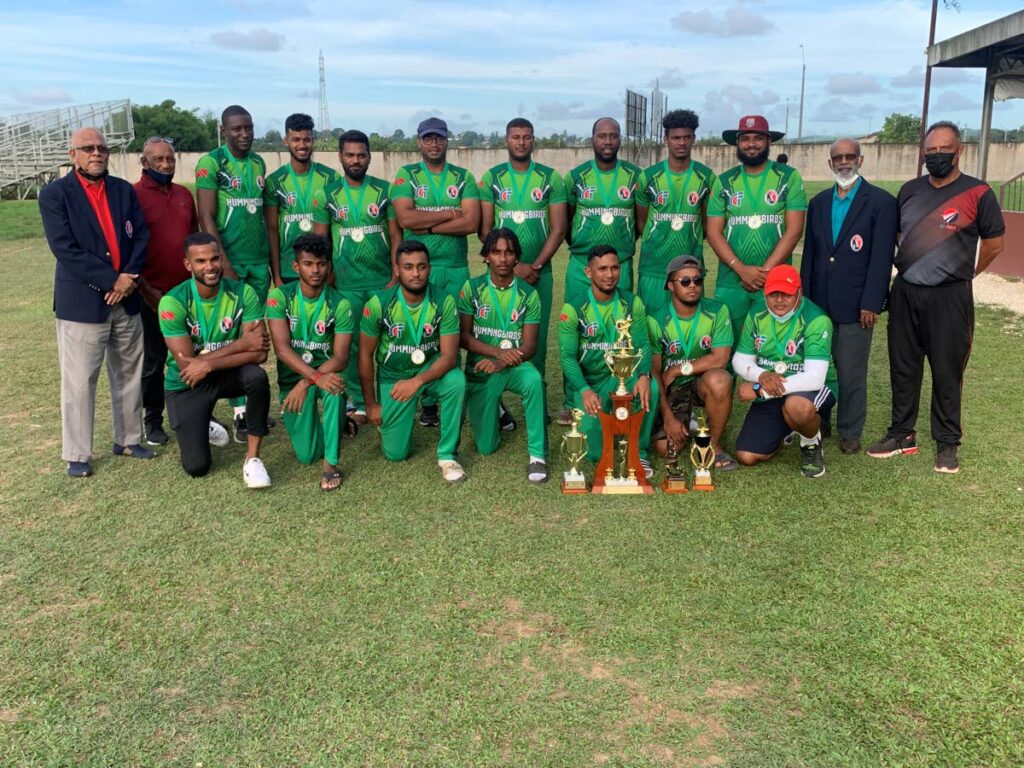 The Hummingbirds team with their awards, after they defeated Scarlet Ibis in the final of the Sports and Culture Fund 50-Overs Senior competition on Sunday, at the National Cricket Centre, Couva. Also in the photo are officials from the TTCB. PHOTO COURTESY TRINIDAD AND TOBAGO CRICKET BOARD. -

AN UNBEATEN knock of 119 runs from opening batsman Kyle Ramdoo steered Hummingbirds to a six-wicket win over Scarlet Ibis and the Sport and Culture Fund/TT Cricket Board senior 50-over title on Sunday.

After winning the toss and opting to bat first, at the National Cricket Centre in Couva, Scarlet Ibis were dismissed for 226 in 45.2 overs.

The Hummingbirds team with their awards, after they defeated Scarlet Ibis in the final of the Sports and Culture Fund 50-Overs Senior competition on Sunday, at the National Cricket Centre, Couva. Also in the photo are officials from the TTCB. PHOTO COURTESY TRINIDAD AND TOBAGO CRICKET BOARD. -

In their turn at the crease, Hummingbirds’ openers Kyle Roopchand (29) and Ramdoo put on 50 for the first wicket, before Roopchand was trapped leg-before by left-arm spinner Ricky Jaipaul.

Ramdoo and Adrian Ali buckled down to construct a vital 97-run second-wicket partnership. When Ali was dismissed by Jaipaul with the score on 147, caught off the bowling of Jaipaul, who then removed Rajeev Ramnath for five.

Bidassie (23) was next to go but Ramdoo and Richards led Hummingbirds to a victorious 230/4 with one over to spare.

Ramdoo’s unbeaten knock came off 140 balls and comprised nine fours and four sixes. He was adjudged man of the match while Jaipaul finished with Scarlet Ibis’ best bowling figures of 3/38.