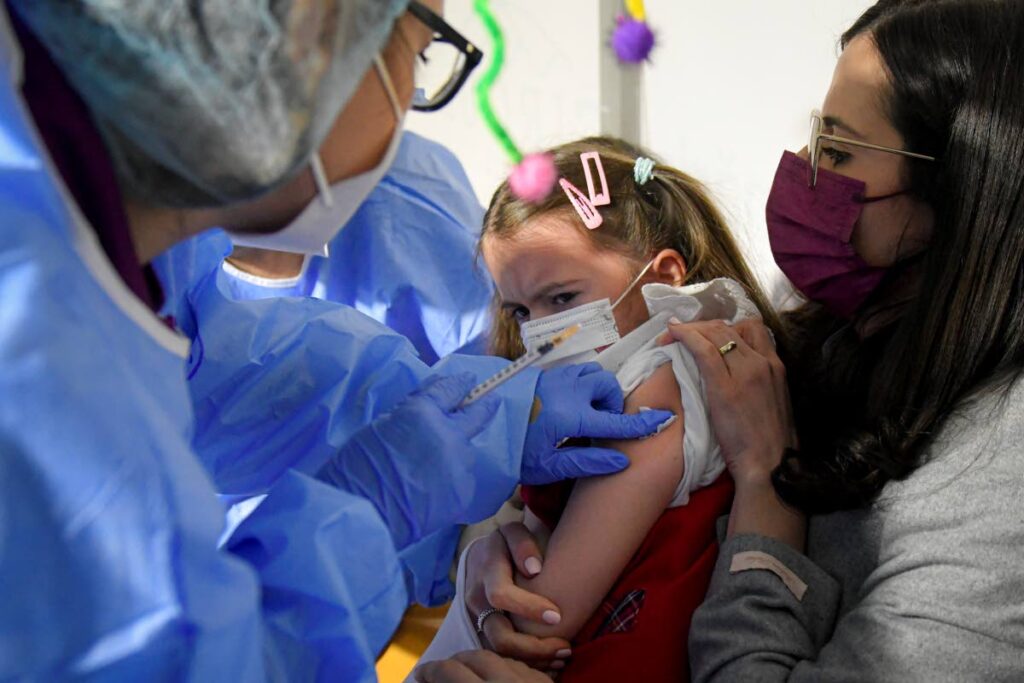 Patricia, eight, grimaces after getting her first dose of the Pfizer-BioNTech covid19 vaccine for children 5-11, at a vaccination centre in Bucharest, Romania. - AP Photo

The Trinidad and Tobago Medical Association has said it is encouraging parents to vaccinate their children aged five-11 against covid19 in order to prevent them from being negatively affected should they catch the virus.

It said it continued to strongly support the Health Ministry’s vaccination initiative against covid19.

In a release, the association said locally doctors have reported seeing children in this age group infected with covid19 with predominantly mild symptoms.

It aslo said there had been a surge in paediatric cases in all age groups at health centres, district health facilities and by family doctors and paediatricians. Sadly, it added, 12 children under 16 locally had died from complications arising from covid19.

It said as a fraternity the association was concerned about the number of multisystem inflammatory syndrome in children (MIS-C) cases, seen predominantly among children brought tohospitals with covid19 symptoms.

“There have been 86 so far. Their illnesses range from new-onset seizure disorder, to diarrhoea and severe abdominal pain, and they require hospitalisation. Internationally, increases in MIS-C cases have been directly linked to increased covid19 infection and it is not unreasonable therefore for us to feel that the trend here is the same.”

It said parents should havet their children vaccinated to reduce the spread of the virus among the primary school age group and the resultant MIS-C admissions.

The association pointed out that the Pfizer BioNTech covid19 vaccine for the five-11 year age group has been approved internationally and regionally by the World Health Organization (WHO), USFood and Drug Administration, Pan American Health Organization (PAHO), Caribbean Public Health Agency (CARPHA), among others,, and procured locally for children.

“To facilitate optimal uptake," it suggested, "vaccines should be available after school hours at the mass vaccination sites so as to reduce school absenteeism. There should be sufficient opportunity to engage in discussion about this with a health care provider, at all vaccination sites to aid parents in making an autonomous decision on behalf of their children.”

Vaccination began for ages five-11 on May 25.

A group of eight doctors – Feroze Omardeen, David Strisiver, David Bratt, Nilash Ramnarine, Rajiv Seeraram, Keith Koo Min Chee, Gautam Tewarie, Sharon Lackan and Johnny Siu Chong – wrote an open letter to the media on June 1 in which they questioned the need for covid19 vaccines for children aged five-11 and the efficacy of these shots for juveniles.

They expressed concern at the vaccine being given to low-risk children and said this practice was not supported by satisfactory evidence of an acceptable risk-benefit ratio, ignored the medical ethical tenet "first do no harm," and ignored the principle of informed consent.