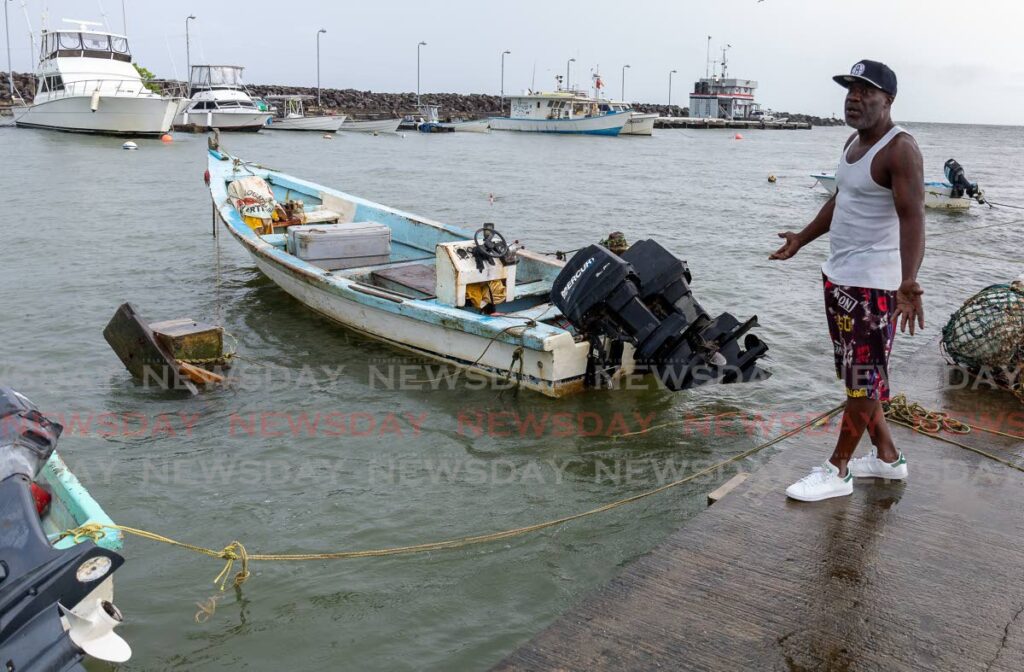 Fishermen at the Scarborough Fishing Depot are voicing concern over the dilapidated conditions under which they are forced to work, which they say makes it harder for them to make an honest day's living.

Under a white tent outside the fishing depot, at the port compound, the fishermen who use the depot were seen huddling together to get away from the rainy weather last Thursday.

Speaking with Newsday, one fisherman, George Alexander, said this wasn’t the only issue affecting the fishermen, and the major one is getting from the jetty to their boats on a daily basis.

He said as a result of the heavy rain which caused rough seas that day, the concrete strips leading from the jetty giving access to the boats were damaged.

“There were a number of concrete planks coming alongside the jetty for the fishermen to walk on to go to their boats. The planks over the years have been left to deteriorate and now there are no planks to walk on. The last of the plank has fallen with the rough waters.”

He said as a result, two of the boats had to be saved.

“We had to tie rope and cut and pull up – cut the ropes away from the planks – for the boats not to go underneath.”

He said while the challenge previously was getting from the planking to the boats, this now creates a further problem.

“As it is now, they have no way of getting on to the boats.”

Another fisherman added: “That is it now, we have to swim the rest, because that is the last plank.”

He said they raised the issue with the THA Division of Fisheries, but have had “no favourable response.”

Fisherman John Wayne Edwards said the issue is an old one and over the years it has been left to deteriorate.

“Everything break out long years ago. They not checking us out at all. They doing things down here like nobody doesn’t really care about us here at this side."

The said they also raised the issue with the All-Tobago Fisherfolk Association (ATFA). When contacted, ATFA’s president Curtis Douglas said he planned to visit the site.

Officials at the THA Division of Food Security, Natural Resources, the Environment and Sustainable Development told Newsday they have since visited the area and submitted a report to the Division of Infrastructure, Quarries and Urban Development.

Secretary of the Division of Infrastructure, Quarries and Urban Development Trevor James said he will look into the issue.