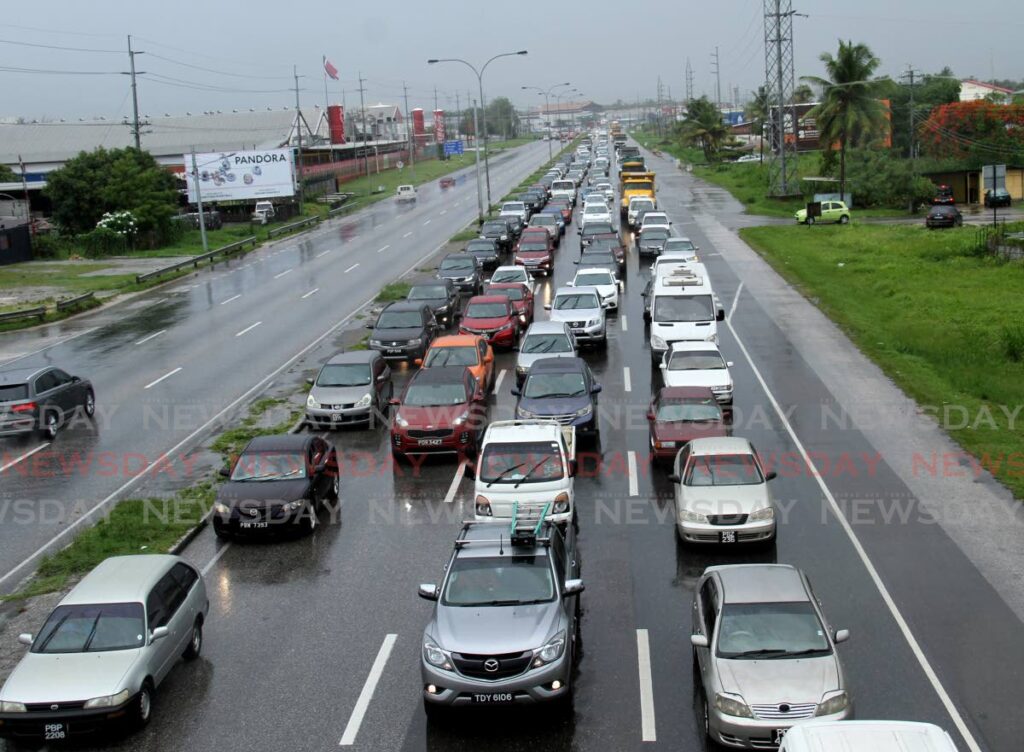 Heavy rush-hour traffic has become the norm once again as work-from-home arrangements for public-service and private-sector workers came to an end as covid19 regulations were lifted. - AYANNA KINSALE

Dr Rowley was speaking at a post-budget press conference on Monday evening.

With the increase in fuel prices (diesel $4.41, super gasoline $6.97, premium $ 7.75 and kerosene $4.41 per litre), journalists asked Rowley if the government is reconsidering a work-from-home policy.

The PNM's manifesto for the 2020 general election listed reduced traffic and the implementation of work-from-home practices as reasons to vote for the party.

It said, "The PNM will support and facilitate remote working and work-from-home (policies) in both the public and the private sector. The reduced burden on the working population will have a positive influence on community and family life."

But on Monday, Rowley said, "I don't know that we are sufficiently prepared for that to be a major initiative, largely because it requires certain technical infrastructure and a certain level of discipline.

"Some people not even working in the office, so we have to be careful how we talk about that."

He said in the private sector, and if it "happens to be useful" to the public sector, the government would not be opposed to such a change, but "we have not really embarked upon that as a major initiative.

"We still expect people to be at the workplace."

Ahmed Nicholls told Newsday it was one of "the most disgusting utterances" he has ever heard from Rowley.

Nicholls said it was further insulting that Rowley seemed to ignore the effectiveness of work-from-home policies applied during the height of the covid19 pandemic, which was "a policy he rescinded without any plausible explanation."

A public-sector worker who preferred not to be named asked, "What he mean we ain't ready for that? I genuinely feel that it have too many old people in Parliament.

"I understand (Rowley's) concern for the stereotypical 'Trini mentality,' but we as a country were forced into the electronic age work by an actual pandemic and managed to come out the other end with relative success.

"Isn't this what the digital transformation initiative is about?

"It's not a matter of starting from scratch but more building on what's already been proven to work, for better. A lot of work that's done requires nothing more than a computer and working internet by both parties. Re-engage the work-from-home in steps if need be.

"We survived a pandemic at home, a fuel hike should not be more difficult to facilitate in that way."

Jason Dookeran said TT is "more than ready" for such a policy, especially as the average person is "pretty technologically set up.

"Most people our age (who) make up the bulk of the workforce are internet-savvy, but the internet is a strange and mythical beast to older people – those at the top of the pile. They only know one way to work, and are adamant against having to learn anything new because they not in school any more."

Ximena Lama-Rondón told Newsday, "We did work-from-home for two years already. You can't ask people to 'rethink how they use fuel' one second and deny them a way to cut their consumption in half the next."

Another woman who sought anonymity said she is very disappointed in the government.

"To use work-from-home initiatives as part of their manifesto to get the young voters' attention, to then now say that this is something that can't be inputted is a slap in the face.

"It worked during the pandemic, so why can’t it work now? If the few bad employees are the problem, then they must work on weeding out these people who have poor productivity."

And a man who also sought anonymity told Newsday it's clear the policy can work in TT.

"The creative, analytical, finance and information sectors made the switch to work from home without many hiccups, often on employees' own equipment, during the pandemic.

"For workers like these, there is no really good argument against work from home."

But he added that for this policy to work, there's a need for investment in proper hardware, software and security, "and may require more of the business process to become digitalised.

"What the PM probably means when he says we aren't ready for (it) is that managers similar in characteristics to him are not comfortable with undertaking the investment and frankly, institutional learning, required to properly facilitate (it)."

One woman told Newsday, "The PM has a history of making insensitive and seemingly out-of-touch off-the-cuff remarks throughout his tenure, and this ranks up there with the best of them."

But she added, "I don’t think our culture is there yet where managers feel comfortable learning how to manage employees in a different way where you do not need to see them to ensure that you’re doing the work."

Another man said, "He basically stood there and told the nation that what was in the PNM manifesto was just an election tactic and 'we,' as the government, haven’t really given much thought to it.

"He brazenly says, 'Some people are not even working in the office.' Bingo! He has identified one of the main issues of the public sector. What now? How about making accountability a fashionable thing again? How about trying to change that culture by implementing stricter measures to see that those type of employees do not reap the rewards of their doh-care attitude come pay time? How about training the public sector employees better? How about not shifting the blame to culture of the workforce and focusing on changing it? How about starting the ball rolling?"

Others told Newsday they view the public sector as inefficient and fear performance would worsen if public-sector employees were allowed to work remotely.

CEO of the Employers Consultative Association Ronald Ramlogan told Newsday, by e-mail, "Given the fundamental changes that have taken place in the last two years within the world of work because of the covid19 pandemic, we at the ECA support the use of hybrid work arrangements which has become an integral part of business continuity and a new modality of work.

"However, notwithstanding, we must be mindful that this does not happen – or at least not effectively – without the right systems, policies, and infrastructure."

He said there must also be "available access to connectivity for all end users and more importantly, it must be practicable for the organisation.

"We also believe that for hybrid work to be effective, leaders of organisations must bear and act on their responsibility to engender the necessary change among their workforce.
"

He said the ECA is there to lend technical support to employers but also to "encourage more conversations on these issues at a national level so that the right solutions can be implemented."

President of the Greater San Fernando Area Chamber of Commerce Kiran Singh told Newsday while a work-from-home policy isn't plausible for every category of worker, it can work for many people.

"I think it's something we can progress towards."

He added, "It certainly would help with traffic congestion on the road."

George said the world is moving towards remote working.

"People can be just as productive and effective, and sometimes even more so, using the technology that's available. It's not necessarily a situation where we have to remain stuck in time in the old mode of methodology."

He said the covid19 pandemic "opened our eyes" as to how effective these policies are.

"It's a question of how we put it together and how we manage it going forward. To me, TT should not close the door to the idea and we should not blind ourselves to the reality of what is happening at companies like Apple, Google and all these international corporations. We have to eventually get to that point."

He said several hours are wasted stuck in traffic to get to and from offices.

CEO of the American Chamber of Commerce (AMCHAM) Nirad Tewarie told Newsday he too believes the world of work is changing.

He said Rowley is "probably correct" in outlining the current situation in the public sector, adding that many companies – including AMCHAM – have adopted flexible workplace policies.

"As we think about the society that we want to create, the systems we want to implement to increase productivity and even in the context of ongoing negotiations, there is probably an opportunity to explore opportunities for remote work for some types of jobs in the public sector.

"The processes and systems that would enable remote work in the public sector would also likely improve the ease with which citizens interact with the state."