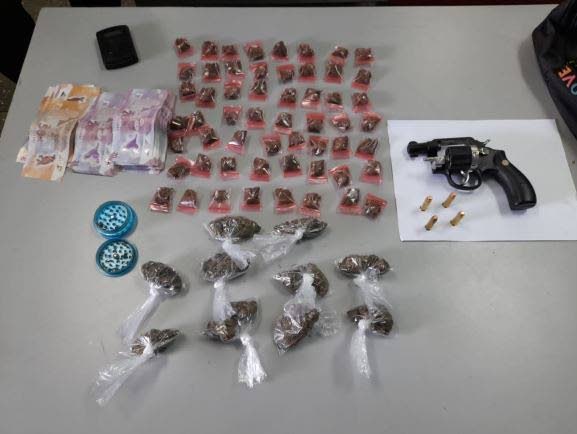 The police have found 13 guns in a series of anti-crime exercises nationwide over the past few days.

Between 3 am and 9 am, on August 8, officers from the North Central Division Task Force, Area West, went to Valsayn Trace, St Joseph and searched a basketball court.

They found a Beretta pistol and some cocaine at the base of the basketball ring.

An exercise in the Southern Division on Monday between 4 am and 8 am led to the arrest of a 28-year-old man from San Fernando.

The police were on patrol in Friendship Village, where they saw the man putting something under a car. Police found an Uzi gun, a magazine and three rounds of ammunition.

During an exercise in the Central Division on Monday at around 7 am police found a revolver and four rounds of ammunition at Diamond Road, Claxton Bay.

The same officers later arrested a 30-year-old man from the district for having a quantity of marijuana.

In the North Eastern Division, officers carried out "an intelligence-led surveillance exercise" on Monday between 3 pm and 6 pm in Malick.

They went to Ninth Street, Malick, where they intercepted a car with two male occupants.

When they searched the car they found a pistol with a magazine containing seven rounds of ammunition.

They arrested two men, 22 and 24, from the district. The 24-year-old had been under sustained surveillance "for some time," the statement said. He is wanted in connection with shooting and robbery offences in the North Eastern, Northern and Central Divisions.