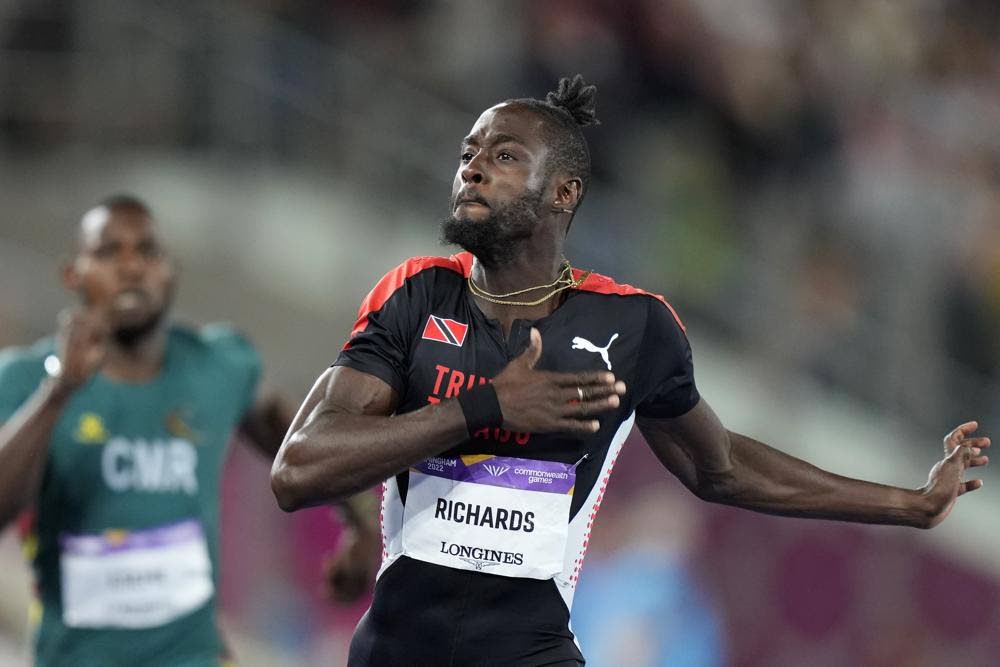 TT’s Jereem Richards celebrates after winning the gold medal in the Men’s 200 meters during the athletics competition in the Alexander Stadium at the Commonwealth Games in Birmingham, England, in this August 6 file photo. - AP

RECORD-BREAKING world indoor champion sprinter Jereem Richards was celebrated twice with the Champion Sports Award (18-35) and Youth of the Year Award, when the Ministry of Youth Development and National Service hosted the 26th National Youth Awards, on Sunday night.

Richards, who is out of the country, was up against national men's team footballer Keston Julien, who played in last year's UEFA Champions League, and Teneil Campbell, who continued to break new ground as a road cyclist as part of the UCI Women's World Team (Team Bike Exchange-Jayco).

The ceremony, attended by several government ministers and dignitaries, took place at Hyatt Regency, Port of Spain, on Sunday night.

In a video recorded for his nomination, Richards said, "I believe I am deserving of this sporting award because of two of my achievements this year. This year, I was able to become the world indoor champion, being the first TT athlete to ever win a World Indoor Championships (event).

"Also, I was able to defend my Commonwealth Games title in a games record, also becoming the third person ever to win a back-to-back title."

At the Commonwealth Games in Birmingham, England in July and August, Richards broke the Games record while clocking a personal best time of 19.80 seconds, while defended his 2018 200m gold medal.

Just before the Commonwealth Games, Richards recorded a time of 19.83 seconds at the National Open Championships – the fastest recorded on local soil – for an easy gold medal.

Youths from all walks of life receiving awards for their efforts in an array of categories from agriculture, youthful resilience, leadership and advocacy, and sport.

In his pre-recorded address the Marlins swimmer said, "I think I deserve this award because for past year, 2022, my training has really paid off to the point that I can break national and international records and become the seventh fastest freestyler at the world juniors."

Earlier this month, Blackman placed seventh in the 50m freestyle at the FINA World Junior Championships in Lima, Peru, clocking 22.83 seconds, the best time ever recorded in the age group from both the Carifta and CCCAN regions.

The Futsal Association of TT, an affiliate of the TT Football Association, won the Youth Project Impact Award, although no description was given as to the merit for winning the award. It won ahead of the Can Bou Play Foundation, an organisation that seeks to fill gaps between professional athletes and aspiring youths; and 4-H Leaders Council of TT, a worldwide programme that encourages individual and group activities, and the development of essential life-skills.

Minister of Education Nyan Gadsby-Dolly spoke at the event. "You are our future crop of leaders," she said. "You carry the future of TT in your laptops, iPads, tablets and social media posts. Look and these and tell us: how does our future look?"