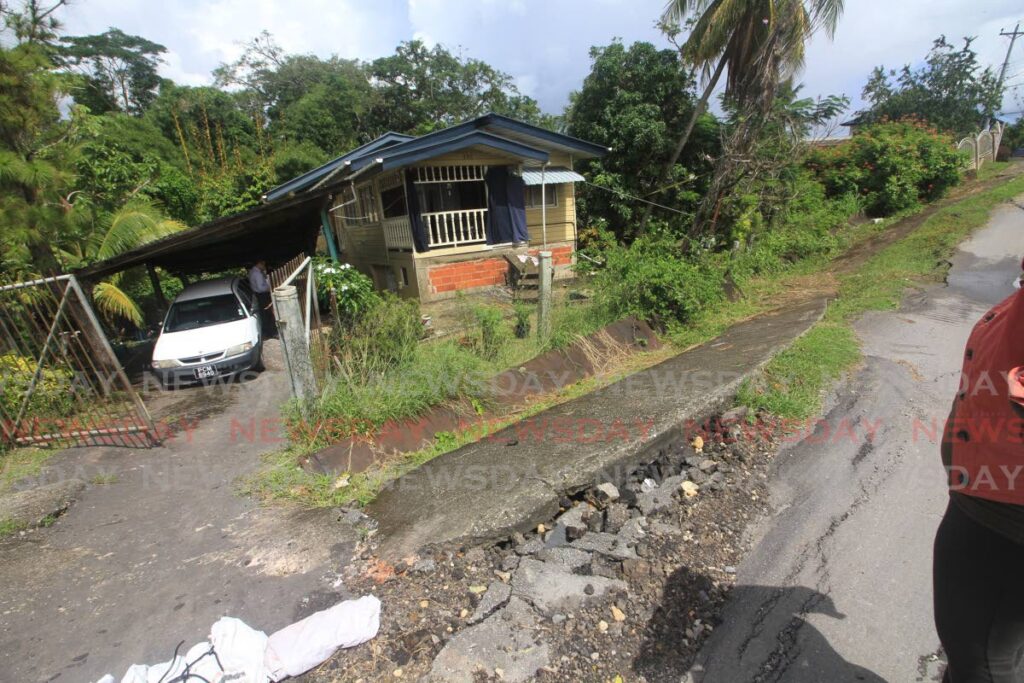 The Pluck Road, San Francique home of the Narine family. A landslip has been treating to destroy their home. - ANGELO MARCELLE

ATTORNEY Prakash Ramadhar is seeking help for members of the Narine family, whose house at Pluck Road/Santa Cecelia Trace, San Francique, was damaged by a nearby landslip.

Ramadhar sent a pre-action protocol letter to the Water and Sewerage Authority (WASA) chairman Ravindra Nanga on Saturday. A copy of the letter was also sent to the Ministry of the Attorney General and Legal Affairs on the same day.

Speaking to the media outside the Narines' house on Tuesday, Ramadhar said water from a nearby WASA line had started to gush into their property again and further undermine it. The Narines have been experiencing this problem since last February.

"We have been concerned about that. The viability of the home is a real concern."

He claimed WASA had not taken any responsibility.

Ramadhar said there is always leakage into the Narines' property from the line whenever there is water in it, and that happened most recently on August 6. 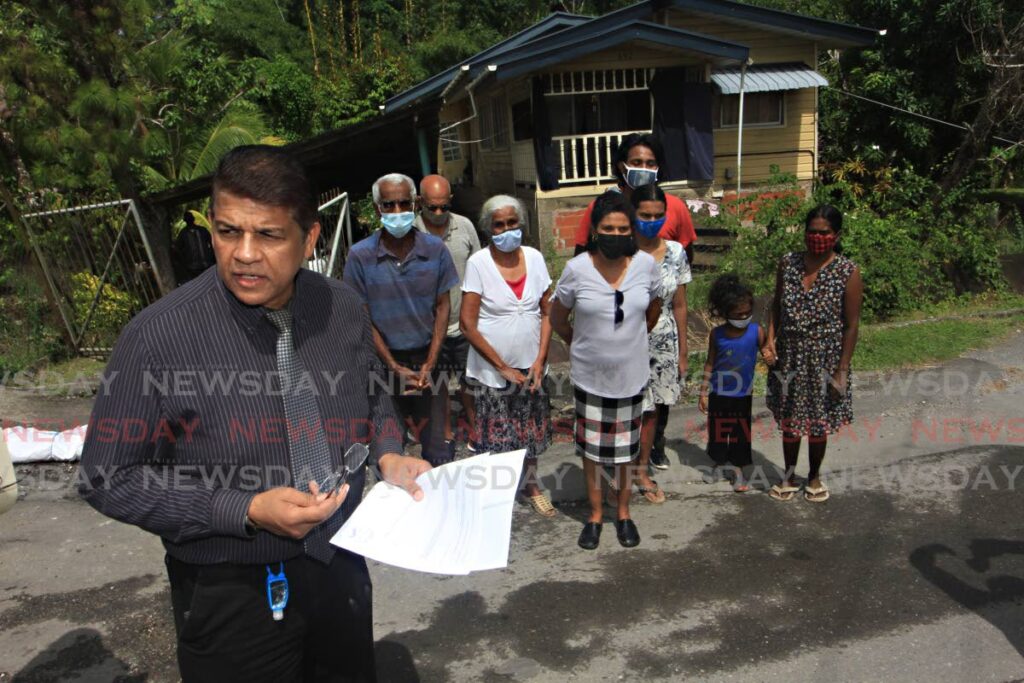 Attorney Prakash Ramadhar (left) speaks to the media on behalf of the Narine family (at back) outside their Pluck Road, San Francique home, where a landslip has been threatening to destroy their home. - ANGELO MARCELLE

He was concerned about efforts by the Works and Transport Ministry to have the house classified as a ruinous structure.

According to Section 176 of the Municipal Corporations Act, an engineer assigned to a local government corporation can classify a structure as unfit for use or occupation. Such structures are defined as ruinous. The owners of such structures can subsequently be directed to demolish, secure, repair or rebuild part or all of the structure.

Referring to copies of letters between the Works and Transport Ministry, Rural Development and Local Government Ministry and the Siparia Regional Corporation, Ramadhar said the corporation's engineer assessed the property and determined it was not a ruinous structure.

Ramadhar believed the Works and Transport Ministry should have been speaking with the Narines with respect to either helping to repair their home or having them properly compensated if they have to move.

But, he said, "They (Works and Transport Ministry) attempted to do something under the guise of law which I consider to be dishonourable."

Ramadhar argued that the ministry is liable for the damage to the Narines' home because it did not maintain the nearby road properly. He claimed the ministry has adopted a similar position elsewhere.

As Ramadhar spoke, vehicles tried to pass behind him along the road.

Ramadhar promised to represent the Narines legally in this matter "as far as it goes."

The pre-action protocol letter to WASA invites the authority to inform Ramadhar within 14 days of its plans to address the Narines' concerns about the damage to their property.

Ramadhar said, "We want to ensure that this family and many others who are in this situation understand that the law protects them, and the liability for those who do not live up to their legal responsibility remains."

Asked about the best outcome for the Narines, Ramadhar said it would be difficult to restore their home to its former state.

Should WASA accept responsibility for the damage to the property caused by the water line, Ramadhar said they would negotiate with WASA .

Those talks would involve giving the Narines adequate compensation either to repair their home or to relocate. 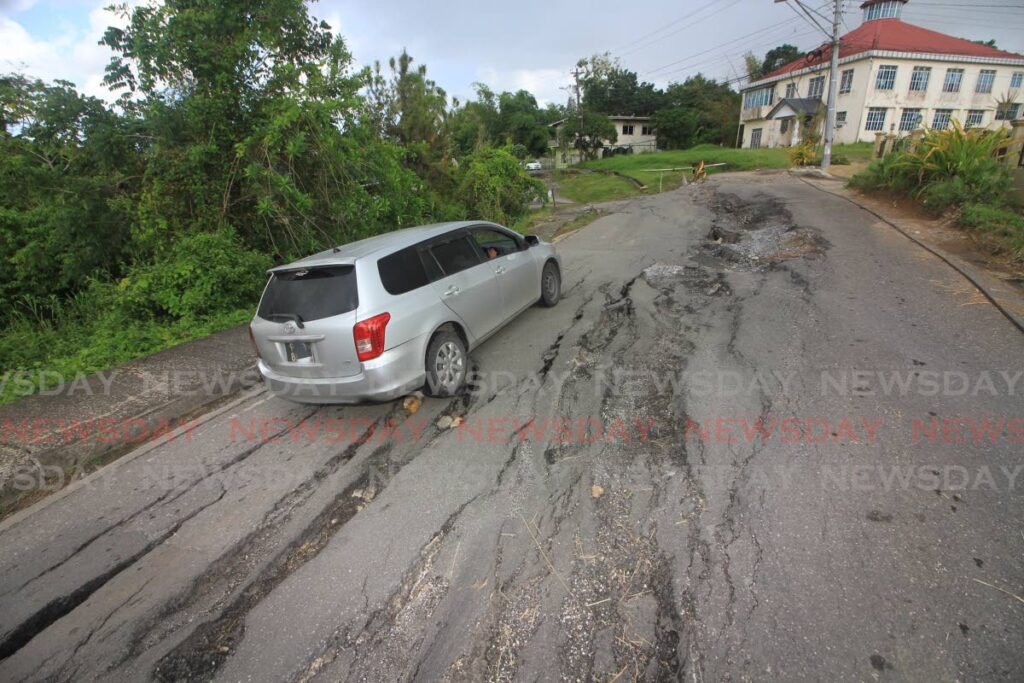 A car cautiously navigates on Pluck Road, San Francique where a landslip has been threatening residents' homes. - ANGELO MARCELLE

Emma Narine Mohammed related the continuing stress the family endures because of the landslip and leaking water line.

The house is owned by Mohammed's parents, Ramhit and Marilyn Narine. Mohammed said 43 years ago, her parents bought the land which the house occupies. The family's first house was built there in 1984 and was rebuilt in 2015.

Mohammed, her parents, her husband Cedric, her sister, her sister's husband and their three children currently live in the house.

"It's horrible only when there is a WASA leak because you can't sleep."

"Water causes damages and we don't know with that kind of water coming down there, if it (house) could just drop down."

She was concerned for the safety of her sister's family, who live downstairs.

"The house could drop down on them and they could end up dying."

Eve: “This tournament worked for us”; T&T coach points to positives after 2-1 loss to Thailand