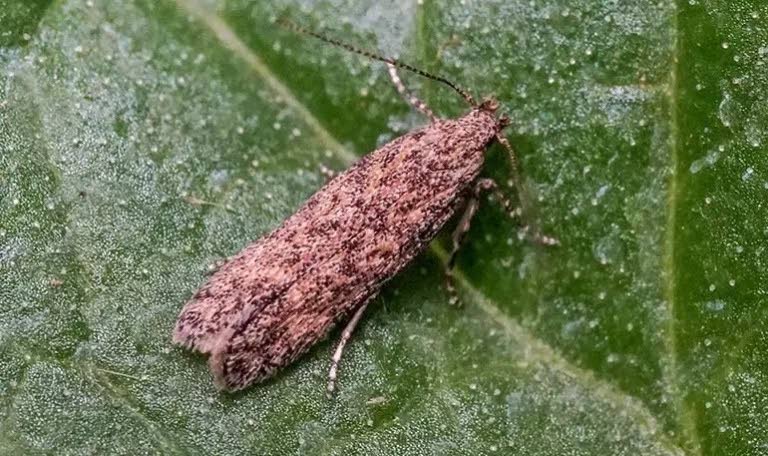 It may be small, but the Tuta absoluta, the newest pest in TT, can be deadly to crops.

Agricultural entomologist in the Ministry of Agriculture, Land and Fisheries Rishi Mohansingh says the Tuta absoluta, or tomato leaf miner, can devastate 80-100 per cent of a field of tomatoes, peppers or melongene.

The tomato leaf miner is a tiny moth, about the size of a mosquito, that comes out at night and feeds on nectar and pollen, and lays its eggs mainly on tomatoes, but also other plants in the solanacaeae family.

When the eggs hatch, the larvae tunnel into the plant – leaves, stem and fruit. The larvae create bore holes which allow secondary infections (fungi and bacteria) to get into the plant and break it down, causing it to rot.

Mohansingh said, in the region, the pest is present in Haiti, Venezuela, South America and parts of Central America. As a result, the Research Division of the ministry set up surveillance and traps for the pests throughout the country. 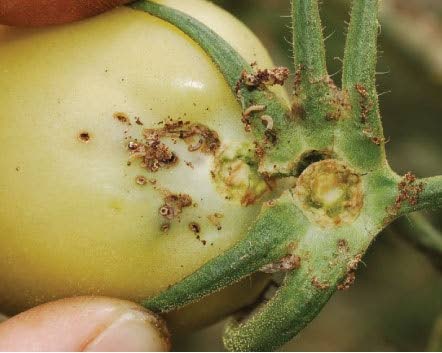 In December 2021, the tomato leaf miners were found in some traps in the counties of St George East and West. Fortunately, the staff has yet to find a plant with the symptoms, which means that, so far, the pest population is very low.

“Right now we can’t say exactly how it came into the country, because of where we picked it up – in the middle of Trinidad – and from there it slightly started to go into the Caroni area.

“Although it flies, it cannot fly that far. If we had picked it up along the borders or something, we could say it came in otherwise. So for now we don’t know, but in time, we will.”

He said the pests could spread by drifting with the wind, through planting material, and in the fruit. He urged people producing seedlings to ensure the pests are not present before selling to customers, as they could spread it. That is also why part of the ministry’s programme involves randomly checking fruit for symptoms in wholesale markets.

While the tomato leaf miner has no negative health effects on humans, its presence could affect the country’s food exports. 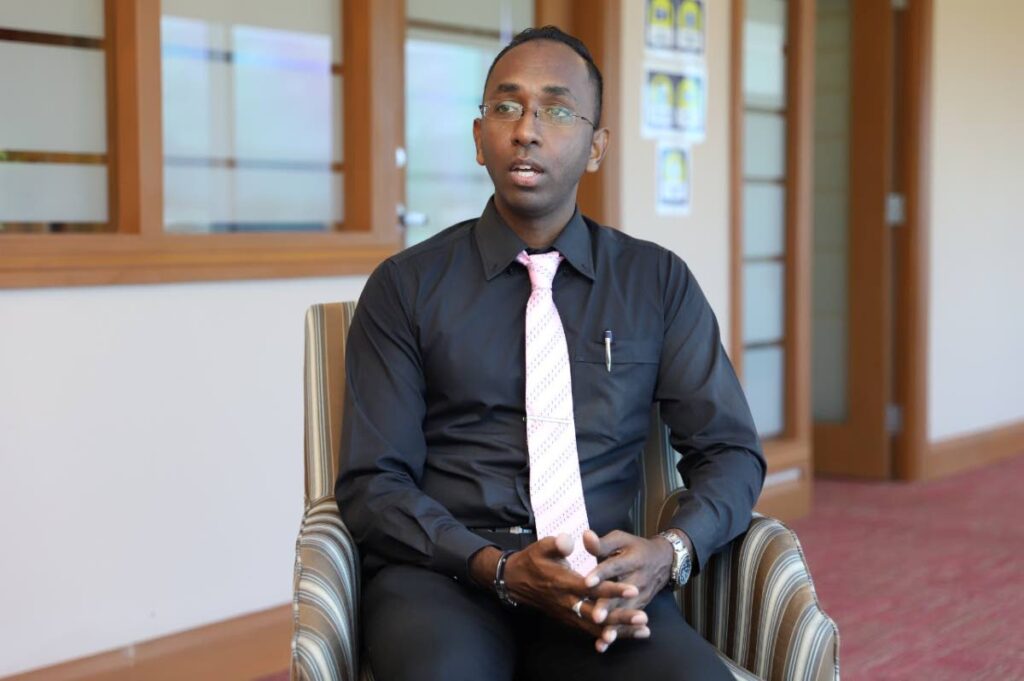 He stressed that the tomato leaf miner is a notifiable pest by law, so it must be reported to the closest county agricultural office or the ministry’s Research Division. There is a $5,000 fine attached for failing to report it.

“If you have the pest, you will not be charged. But if you have it and don’t report it and you’re not dealing with it, then you could be charged. That is the difference. You don’t want to be harbouring this pest and it affects other people.”

What symptoms should producers look out for?

When the larvae burrow into leaves, they feed on the middle layer, which looks like a transparent blotch on the leaf. Over time, the blotch turns brown, blocking photosynthesis, resulting in no fruit.

Mohansingh cautioned producers to also look under the sepals (the small leaves on the fruit) where one could find bore holes and brown larvae droppings. He added that damage to the stem was not usually observed, as the larvae eat the inside.

He pointed out there is another type of leaf miner in TT, the pinworm, that also makes holes in tomatoes, but it does not attack the stem and the damage caused is less than the tomato leaf miner. Also, the browning of leaves could be a fungal issue.

Therefore, he encourages people to take photos of the damage and e-mail them to the division at cesentomlolgy@gmail.com, so professionals could determine if the problem really is the tomato leaf miner. The suspected plant could also be placed in a plastic bag, sealed, and taken to the closest agricultural office.

Male tomato leaf miners live seven-eight days and the females live for about 14 days. They take around 30 days to grow from egg to adult, and a female can lay up to 260 eggs in a cycle. 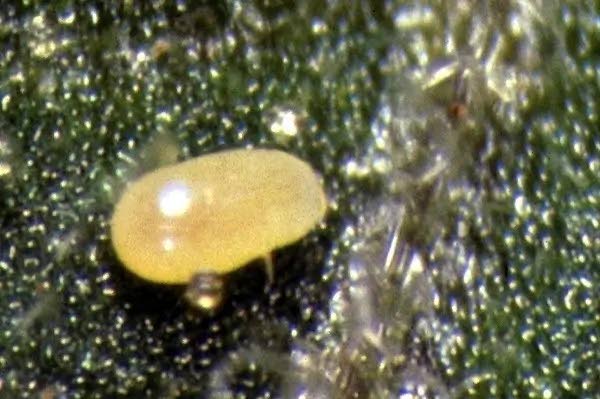 A magnified image of a Tuta absoluta egg which is a yellow colour. Photo courtesy CABI -

The ministry is recommending the integrated pest management approach to deal with the pest, including the use of cultural practices, trapping and chemical application.

Cultural practices involve controlling weeds around fields, as that is where the pests tend to hide. Crop rotation, using another crop for a month or two, breaks the life cycle of the pest, which dies from lack of food. Also, by removing affected plants and fruits, and burning them in a metal drum, one can reduce the pest population by destroying the larvae.

The ministry is talking to suppliers about importing traps so they would soon be available in agriculture shops.

Mohansingh explained that the plastic traps have lures which have female pheromones that attract the males. Similar to a fly trap, the male moths then stick on a pad and die, indirectly reducing the population in the long run.

He said farmers would have to replace the sticky pads every two weeks and the lure every six weeks. All they have to do is hang the traps on the plant, two feet from the ground, and spread throughout each field. 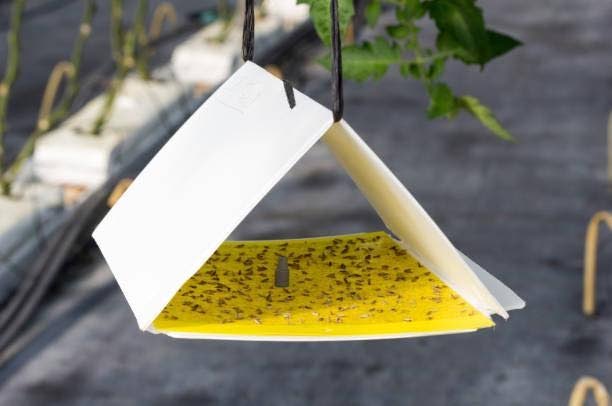 He recommended about 20 traps to every acre of land, and 40-50 traps in a hectare.

The last control available is chemical application. There is a list of effective chemicals recommended for the pest on the ministry’s website, agriculture.gov.tt.

“Not just any pesticide would work, so we’re asking farmers to visit the website and get that information before they just start spraying a chemical. We don’t want them to be indiscriminately using or over-using chemicals trying to control this pest.

“The good thing is, since there are a number of pests that attack tomatoes, peppers, and melongene, more than likely the chemicals the farmers are using are already the recommended ones for
Tuta absoluta. So it’s not like they have to go get some new or very expensive type of chemical.”

He asked producers to start the integrated pest-management programme as soon as possible to further reduce the pest population so the tomato leaf miner would not become firmly established in the country.