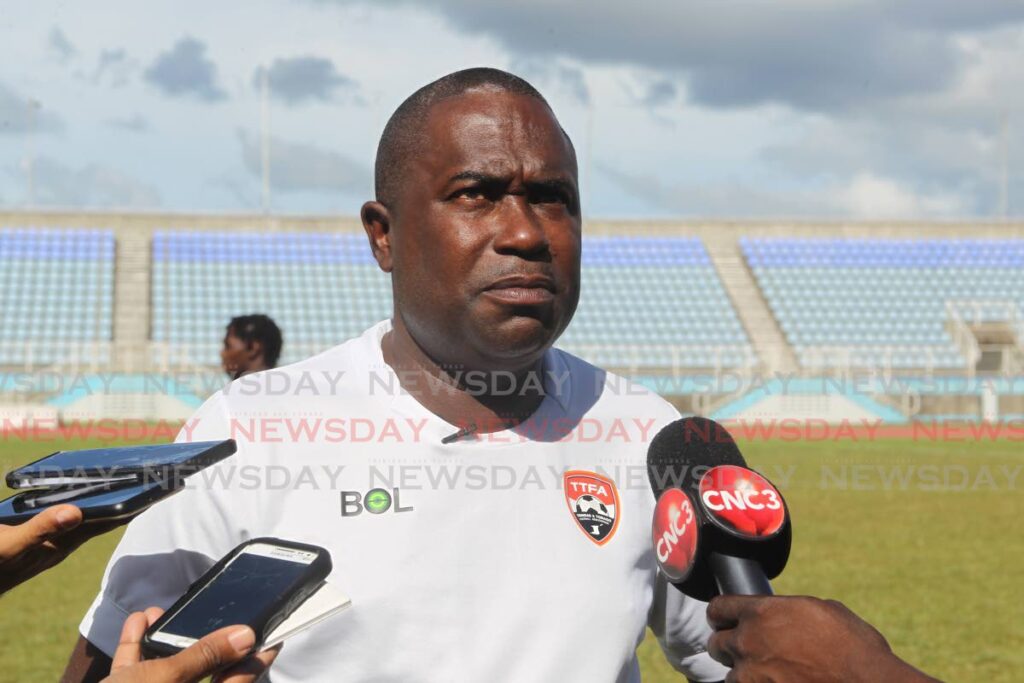 Angus Eve during a training session with the TT Under-20 football team at the Ato Boldon Stadium, Couva on Monday. - Marvin Hamilton

COACH Angus Eve announced a 24-man TT men’s Under-20 squad that will head off to the Concacaf Men’s U-20 Championship in Honduras, next month.

Before the Concacaf Championship, the squad will travel to Costa Rica for a training camp.

At the championships, TT will open Group F against Haiti on June 19 at the Estadio Morazan in San Pedro Sula and will face Mexico on June 21 and Suriname on June 23 at the same venue.

The top three teams in the group will advance to the round of 16. They will be joined by the four teams advancing from the 2021 Concacaf Under-20 Championship qualifying. Unlike the previous editions, the competition will determine not only the four CONCACAF representatives at the 2023 FIFA Under-20 World Cup in Indonesia, but also the two CONCACAF representatives at the 2024 Summer Olympics.

Eve oversaw a residential training camp at the Home of Football in Couva from May 19-28 with 37 players.

Preparations resumed with training sessions in TT on May 3 following combines in Washington and Florida in April during which a total of 78 players, either eligible to represent TT through parentage or place of birth, were seen in Washington DC (48 players) and Fort Lauderdale (30).

“For the last two weeks I saw the kids come in. We have a particular way we like to play and for the most part, every single kid gave their best, they gave a 100 per cent. I was very happy with the camp. I think TT’s football is in a good place seeing these kids coming up,” Eve said in an interview on the TTFA (TT Football Association) social media channels.

Speaking about cutting players from the training squad, Eve said, “Unfortunately we can’t keep all of them and maybe put some of them in another league so we can continue seeing them like the bigger countries such as Mexico and the US do. But we will keep the boys in a database so we will know how to locate them and monitor their progress.

“On the players who have made it into the final cut - some of them have a bit of international experience. Some would have been with the previous Under-15 team a couple years ago and some would have been in Stern’s (John) previous Under-17 team. And then we had some standouts from the local league here. We have a couple players who are also plying their trade in the MLS, so it’s a nice cadre of players.”

Eve encouraged the players who did not make the final squad to not give up on playing for TT.

“I’m gutted for the guys who were not selected and I’m overly emotional over it but as I explained to them…this is not the end. Michael Jordan was cut from his high school team and he became the best basketballer we’ve ever seen, so this is just a stumbling block and they can go back to the drawing board and come back stronger."

The former men’s team captain and member of the first TT team to qualify for a FIFA World Cup - the 1991 FIFA World Youth Cup in Portugal - said he was looking ahead to the next few weeks with keen anticipation.

“I am extremely excited about the next few weeks of our football. I am extremely fortunate. God has blessed me with position where I can try to affect…improve and help TT football get back on the map and I am very humbled by that,” Eve added.