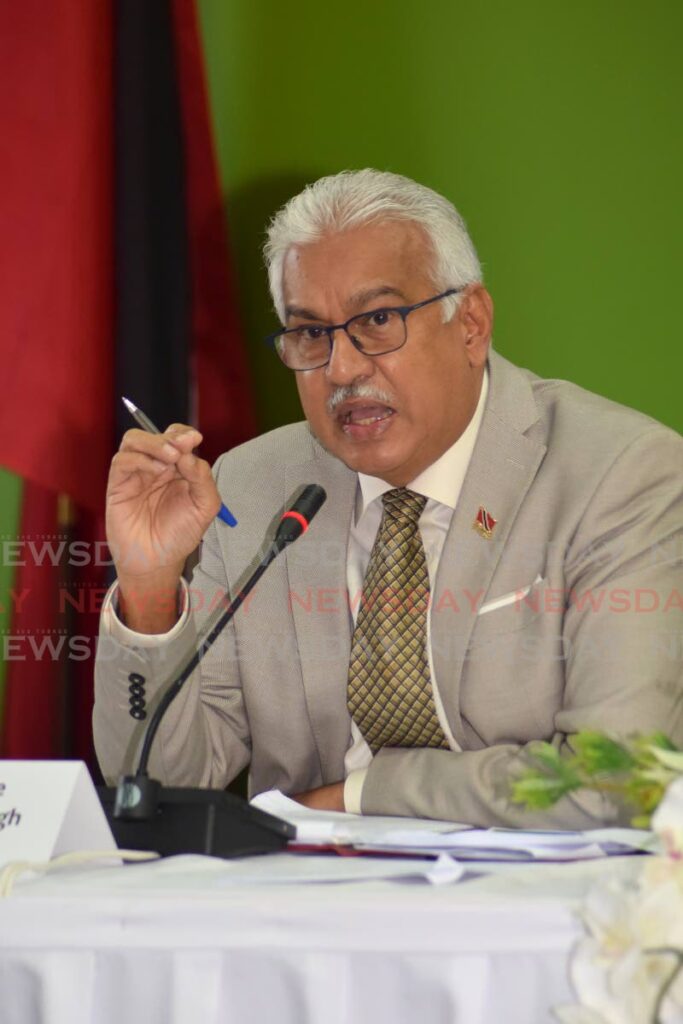 TWO covid19 step-down facilities that were decommissioned earlier this year will be reactivated because of recent increases in covid19 cases.

Health Minister Terrence Deyalsingh made this announcement at the virtual covid19 news conference on Wednesday.

The ministry is not advising the cancellation of any events that encourage mass gatherings (such as activities being organised to celebrate Trinidad and Tobago's 60th anniversary of independence and Tobago Carnival in October). But Deyalsingh said people are asked to continue to demonstrate individual responsibility to protect themselves against covid19 in any environment.

In its covid19 update on Tuesday, the ministry said there are 6,638 active covid19 cases. No covid19 deaths were reported on Tuesday and the death toll to date is 6,638 people.

Chief Medical Officer (CMO) Dr Roshan Parasram said, "We have seen a slow and steady rise in the hospital numbers over the last two weeks."

A total of 184 people are currently hospitalised for covid19.

Parasram said there are 69 covid19 patients at the Couva Hospital and Multi-Training Facility. Four are in the hospital's intensive care unit and five in its high dependency unit.

Deyalsingh said he spoke with Parasram and the ministry's Principal Medical Officer Dr Maryam Abdool-Richards on August 7 about the rising number of covid19 hospitalisations.

"This reactivation of these step-down facilities is ongoing and should be completed over the weekend and into Monday. The cost of managing these facilities will be borne by their respective regional health authorities."

He said as patients are ready for a step down facility, "Those who are well enough will go to these facilities, therefore freeing up some space at the hospitals (for new covid19 patients)."

He was asked if other parts of the parallel health care system that were decommissioned earlier this year when covid19 cases were lower could be reactivated if cases continue to rise. Deyalsingh replied, "As the situation progresses and we look at the numbers as we go on a daily basis, we will make other decisions which need to be made."

On not urging the cancellation of gatherings, he said, "I have avoided for good reason singling out any activity, any parade in either Trinidad or Tobago."

Deyalsingh reminded the public about the relaxation of several covid19 measures in line with statements by the Prime Minister in March about TT beginning to transition from the pandemic to endemic phase of covid 19.

A disease which is prevalent throughout the world or thoughout large areas is classified as a pandemic. An endemic disease is one which is regularly found among particular people or in a certain area.

He reiterated that accompanying the relaxation of most covid19 measures was the fact that management of covid19 falls more on the shoulders of individuals as opposed to the government.

Deyalsingh reiterated this is important because approximately 700,000 people in TT have chosen not to be vaccinated against covid19.

There is no particular setting where people are more likely to get covid19 compared to others.

He said to stigmatise an event or setting as causing covid19 takes away from ensuring that individuals act responsibly to protect themselves and others.

He recalled being on a flight recently to Tobago, and while he was masked, he said, "I sat next to a woman who did not have on a mask, and I was scared."

He added that while mask-wearing is not mandatory on flights on the domestic airbridge, passengers are advised to consider wearing them.

On mask-wearing in schools, Deyalsingh said his ministry continues to advise the Education Ministry on these matters and the relevant pronouncements will be made by that ministry.

He also said there is no shortage of paracetamol (a painkiller) in the public sector. While there could be temporary shortages of some medicine in the private sector from time to time because of supply-chain challenges, Deyalsingh said the ministry had no role to play there.

Parasram said it was possible that other viral illnesses could increase as covid19 measures were relaxed, and information on that would be provided at a later time. Noting that covid19 has made the world more vigilant to the emergence of new diseases, Parasram said the ministry is paying attention to a new zoonotic disease reported in China on Tuesday. A zoonotic disease is one that is transmitted from animals to humans.